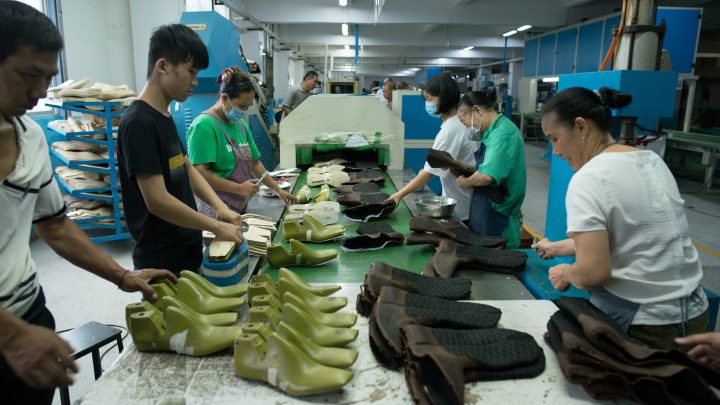 COPY
Most people who produce goods for the U.S. come from China's poor countryside. Photo courtesy of Shanghai 808 Studio
China 70

Most people who produce goods for the U.S. come from China's poor countryside. Photo courtesy of Shanghai 808 Studio
Listen Now

China makes almost 70% of the shoes imported into the U.S. — according to data from the U.S. Commerce Department, Chinese manufacturers sent 1.7 billion pairs of shoes to America in 2018.

The industry is fueled by cheap Chinese labor from the poorer parts of the countryside; there are an estimated 288 million rural migrant workers in China. From the southern Chinese city of Dongguan, here are some of their stories.

Salary in 2003: Factory workers get a base salary, plus extra money for each pair of shoes they finish, as well as overtime pay. That year, Tai could earn as much as 960 yuan ($130) a month, which was nearly the same as she could earn in a year from farming in her village.

Hardest part about working in Dongguan: Being away from her family. When she first left her village to find work in the city some 900 miles away, she had to leave her teenage son and 5-year-old daughter behind in the village. She didn’t go home that first year so she could save money. “When my children called me, I cried,” Tai said.

President Donald Trump says China has been benefited more from its trade relationship with the U.S. than the U.S from China. Does she feel like a winner? Tai is not sure she is a winner. The money she has earned in the manufacturing sector has allowed her to put her children through school, paid for her son’s wedding, as well as a two-story family home in her village. However, the shoe industry is moving out of China because labor costs are rising. “A lot of people have lost their jobs to cheaper places, like Vietnam and Cambodia,” Tai said.

Job: Supervisor of 50 workers at Kaihong shoe factory, which manufactures for U.S. brands like Steve Madden, Naturalizer and Dr. Scholl’s.

Work schedule: 8 a.m. to 10 p.m. daily with at most three days off per month. He said his work days used to be longer. In 2004, he would start at 7 a.m. and work until at least 1 a.m. With such long work hours, migrant workers can only return to their hometowns once a year, usually during the Lunar New Year.

Family: His wife works in a different city, leaving his two teenage sons in the care of their grandparents in their home village. His family reunites once a year but he said it’s worth it to earn more and save more.

Plans to spend savings: Help his two sons get married. Although both of his sons are still in junior high, he and his wife want to save for their children’s weddings. It is customary for the groom’s family to offer a large sum of money to the bride. In Zhao’s hometown, the expected cash gift is between 100,000 yuan to 200,000 yuan ($14,000 to $28,000), equivalent to two to four years of their salaries. On top of that, they will also be expected to buy properties and cars when their sons get married.

Motivating factors to leave the countryside at the age of 43? To earn enough money for a house in a nearby town for her son. It will cost between 200,000 and 500,000 yuan (between $28,000 and $70,000), roughly equivalent between 2.5 and 6 years of her and her husband’s salaries combined. This property will allow their son be seen as marriage material by other families in China. Yang is also saving for retirement, medical care and to take care of her elderly parents. There is a pension system covering poor people in China’s countryside, but the amount is marginal. In some provinces, the pension is about 100 yuan ($14) per month.

How she’s spending the money she earns: She sends her son to a private junior high school, which costs 40,000 yuan ($5,700) a year, roughly equivalent to two-thirds of her annual salary. The school tuition is four times higher than public schools. “I hope he will study hard, then he will not work in factories like my husband and I do,” Li said.

Salary: 4,000 yuan ($570) per month, of which half is sent back to her elderly parents because the pension system for rural China leaves them short.

Can she settle in Dongguan city? It’s difficult. Li cannot afford a house in the city on a factory wage; Dongguan is expensive to stay in. However, Li said she was not ready to return to the countryside just yet. “I want to work for a few more years when I am still young. After all, I can get a much higher salary here than in my hometown.”