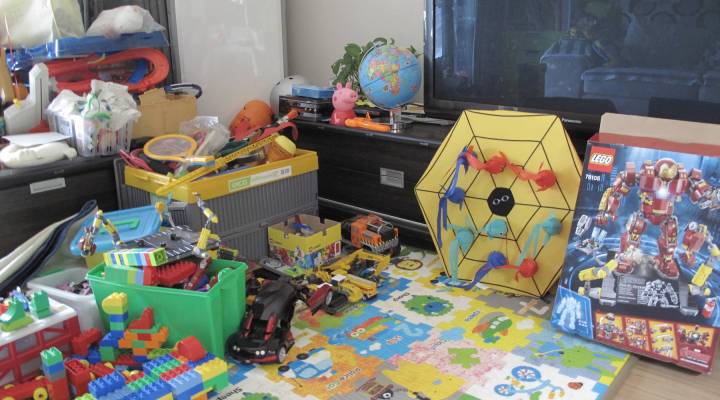 Li Dapeng and her husband Ye Yu live on the outskirts of Shanghai. Their two-bedroom apartment is cluttered with stuff.

Li, 37, fills her night stand with only imported cosmetics and skincare from Japan, France and the U.S.

Together with her husband, Ye, she owns a Microsoft laptop, two Apple computers and an iPad. They also have two iPhones, which each cost about an average month’s wage in Shanghai.

However, Li said her consumption of American goods is modest compared to that of her four-year-old son.

“The (Crayola) package says it’s OK if kids get the paint in their mouths. Chinese brands may make the same claim but I’m not sure,” Li said.

A string of food and medical scandals in China has driven up demand for imported products. The U.S. exported $130 billion worth of goods to China last year, while Americans bought $505 billion worth of Chinese goods.

A series of food scandals in China have led anxious parents to turn to imported products for their kids.

President Donald Trump believes the U.S. could be selling much more to China if the Chinese government didn’t put up so many barriers for foreign businesses. His tariffs on $34 billion worth of Chinese products are, in part, meant to force China to open its markets.

Chinese state media commentaries suggest that people in China will be able to weather the trade tariffs for the sake of national pride.

“[T]he trade war with America is a fight for China’s destiny. Its people and government are willing to make sacrifices, overcome difficulties, and make a concerted effort to safeguard the country’s sustainable economic development,” the state-run broadcast China Media Group said in a commentary days after the tariffs on $34 billion Chinese imports came into effect.

China has retaliated with tariffs targeting American farmers, who exported $20 billion worth of U.S. agricultural products to China last year while Chinese producers only exported $7 billion to the U.S.

“I buy American oranges and cashews but not frequently, so I haven’t noticed if prices have gone up yet,” Li said.

“My living standard has improved a lot, so I am not that sensitive to a price increase of 10 or 20 percent anyway,” Li said.

Li Dapeng (left) and husband Ye Yu with their son in Macau.

However, if the tariffs make products too expensive, Li has many choices of other types of imported foods.

It is a big change from her childhood. Li said back then foreign goods were such a novelty that her parents would point out any foreign products they had to house guests.

“At that time, only our TV and video cassette recorder were imported. They were from Japan,” Li said.

Since then, Li and her family have benefited from 40-years of China’s “Reform and Opening” policy that opened the state-run economy to the outside world.

Like many Chinese citizens who have spoken to Marketplace, Li’s husband Ye believes this trade dispute is about stemming China’s rise.

If the current dispute escalates into a trade war, Ye thinks it will hurt the U.S. more than China.

“I am certain I can live without American products because they are not essential items,” he said.

Many U.S. exports are pricier things like American beef, cherries and children’s clothing.

However, even if Chinese consumers do not buy American, costs may still go up.

The pork in Ye’s fridge is from China, but to produce that meat, the pigs are fed on American soybeans, on which the Chinese government has now imposed a 25 percent tariff.