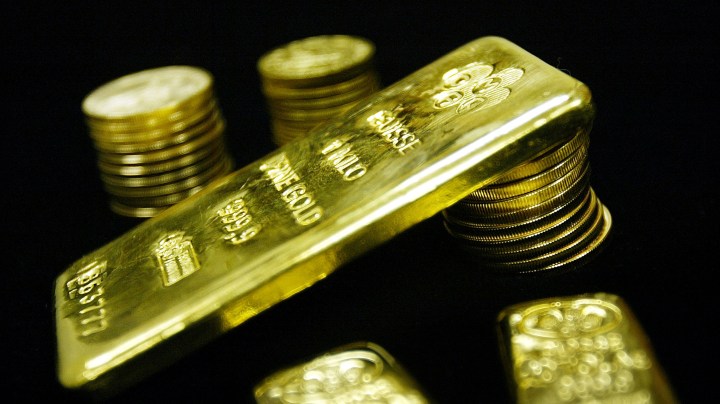 Gold prices have been on a tear recently. This week, they’ve been sitting at around $1,500 an ounce — up roughly 16% since the start of the year.

There are a lot of reasons people buy gold, but one of the biggies, especially relevant given the macroeconomic mood right now, is that it’s considered the safest of safe havens, when other investments look like they might be going south.

“It’s difficult for me to buy something and feel secure,” said Justin Panayiotis, 31. “Everybody’s searching for security.”

Panayiotis said gold now makes up about 10% of his portfolio. He’s been investing in gold ever since college, picking it up little-by-little when he sees an opportunity. He said that’s one of the precious metal’s advantages — it’s easy to get your hands on different amounts of gold.

Gold’s divisibility — investors can buy a bar, or just a few coins — is a big reason it’s historically been used as a store of value, said Sebastian Mallaby, senior fellow for international economics at the Council on Foreign Relations.

“If you had used, say, a cow as a store of value, it’s less convenient, because you have to cut the cow up into pieces,” Mallaby said.

There’s still the issue of storage. Holding on to actual gold can be costly. Investors can get around that by buying stocks in companies that mine gold. Still, those are still stocks, and their value can be affected by other factors, like labor issues.

“For a long time, investors recognized that it was actually quite difficult to stick gold in your portfolio,” said Dave Nadig, managing director of ETF.com, a site that tracks exchange-traded funds.

ETFs buy up assets — usually stocks — and they pool them together, letting investors buy shares of that pool. Nadig says generally, gold ETFs work in a similar fashion.

He said the advent of gold ETFs has made gold investing a lot easier. According to the World Gold Council, people moved $2.6 billion into gold ETFs last month.

“They basically buy gold, they stick it in a vault, and then the shares — the interest in that vault — are traded on an exchange, just like shares of any mutual fund,” he said.

But no matter how easy it is to invest in gold, there’s still a cost. Gold doesn’t pay dividends or interest, and investors would miss out on any bull runs on the stock market, said Christopher Vecchio, CFA, a senior currency strategist at DailyFX.

If people are investing in gold, Vecchio said people are thinking about something else. For instance, a weaker European economy, and the trade war, which could slow global growth even more.

Vecchio said what’s been driving up the price of gold lately is the belief that metal will hold its value when everything else does poorly.