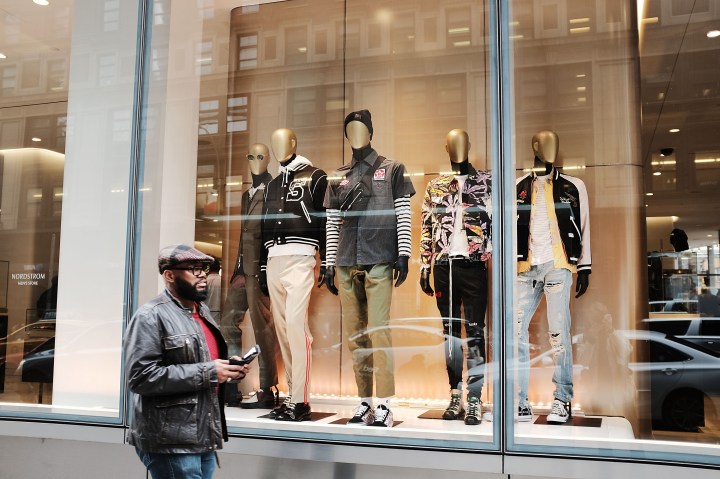 A view of a Nordstrom men's store in New York City. Or wait — is it Nordstrom's? Spencer Platt/Getty Images

A view of a Nordstrom men's store in New York City. Or wait — is it Nordstrom's? Spencer Platt/Getty Images

Is it Nordstrom or Nordstrom’s? Kroger or Kroger’s? Sbarro or Sbarro’s?

Our minds tell some of us that it definitely needs the extra letter. That “s” — so brief, so unobtrusive, so natural sounding — sneaks easily into our lexicon. But oftentimes it’s unnecessary. (None of the aforementioned names are possessive.)

Adding to the confusion, sometimes companies don’t even follow their own naming conventions. It’s called “TGI Fridays,” but the company has also used the spelling “T.G.I. FRiDAY’s” in its logos and Nordstrom storefronts have displayed “Nordstrom’s” in the past.

Laurel Sutton, co-founder of the branding company Catchword Branding and vice president of the American Name Society, said we’re prone to mislabeling these companies because retailers like department stores and restaurants have a long history of being named after their founders and taking on the possessive form.

“That was the way you knew that the place you were shopping at had quality. There was a person behind it,” Sutton said.

About a century later, consumers also saw the rise of one of the world’s biggest fast-food chains: McDonald’s, founded by brothers Richard and Maurice McDonald.

Sutton said when people are recalling a company name, they’re so used to seeing company names with that possessive s, they’ll think, “Mmm, do I know if this has an ‘s’ on it or not? I’ve seen it hundreds of times. Let me just go ahead and stick that ‘s’ on it.”

She added that people may be more likely to do this with a company name that sounds like it could belong to a real person. Contrast McDonald’s with Burger King. Sutton said she doesn’t think people are prone to saying “Burger King’s.” “King,” after all, is but a common noun.

But what about company names some people add a possessive “s” to that we might not be familiar with as the names of actual people? Like Kroger or Sbarro?

They didn’t immediately register as names to either me or Tina Lowrey, a marketing professor at the international business school HEC Paris.

But Lowrey said if they don’t sound like common nouns, either, then we might assume it’s a name and add an apostrophe “s” without thinking about it.

Sutton also noted that familiarity with a surname will vary person to person.

“My mom’s family is Italian, and I grew up in an area of New Jersey that had a lot of Italian folks living there, so the name Sbarro doesn’t seem at all unusual to me,” she said in an email. “There was a Sbarro pizza place in my local mall and we always called it Sbarro’s!”

Carey Morewedge, a marketing professor at Boston University, said another reason people might use the possessive “s” is because they perceive the physical store they’re visiting as the company’s property. If you’re telling someone you’re heading over to hang out at Joe’s house, you wouldn’t say you’re going to Joe. You’d say you’re going to Joe’s.

Some people online have speculated that the tendency to add a possessive “s” might break down based on identity, like the region you’re from. However, linguists said they don’t think it’s confined to these traits.

“It’s a pretty basic linguistic phenomenon, so it’s not the kind of thing people choose for identity purposes,” said Carmen Fought, a linguistics professor at Pitzer College in California.

In addition to the hodgepodge of name variations out there, there are also well-known brands like Michaels and Starbucks (named after the “Moby Dick” character Starbuck) that have that “s” at the end without an apostrophe.

Sutton said she thinks Starbucks deliberately avoided the apostrophe to avoid confusing consumers, but still wanted that “s” because “it would be weird just to be called ‘Starbuck.’”

“Some companies have dispensed with the apostrophe because it just became burdensome to try to remind people,” she said.

When companies are choosing a name, according to Sutton, they should try to keep it simple so people don’t have to worry about whether they’re spelling it correctly or adding the correct punctuation.

That said, she noted that when consumers do misapply that “s,” people still tend to understand what they mean.

When asked for comment about the Kroger vs. Kroger’s controversy, the company’s head of communications and media relations, Kristal J. Howard, sent this Instagram post of Beyoncé’s daughter, Blue Ivy:

Joking aside, she also noted that Kroger is fine with whichever way you end up labeling the company.

“Whether a customer says Kroger or Kroger’s doesn’t matter to us, because we love them all,” Howard said.

Richard Vollmer, the chief creative officer of Jo-ann Fabric and Craft stores, said he encounters customers who refer to the company as “Jo-ann’s,” but that it’s also more than fine by him.

“We actually cherish that. We really put a lot of respect towards the fact that people do that,” Vollmer said. “Personification is endearment, is kind of the way we look at it.”