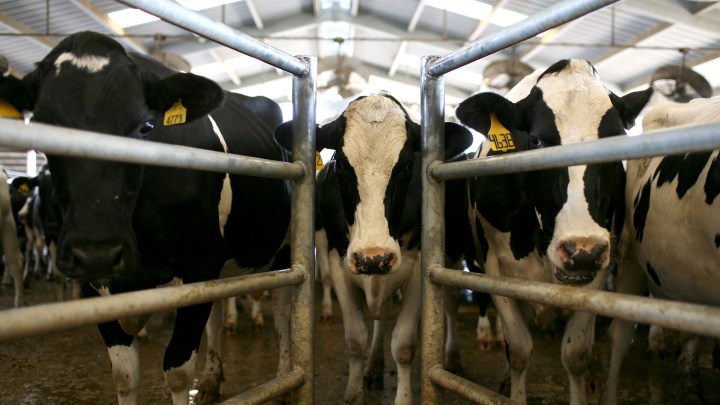 COPY
Cows wait to be milked at the Faria Dairy Farm in 2009 in Escalon, California. Justin Sullivan/Getty Images
Trade showdown

Cows wait to be milked at the Faria Dairy Farm in 2009 in Escalon, California. Justin Sullivan/Getty Images
Listen Now

Amid the ongoing trade dispute, China announced it is halting purchases of U.S. agriculture this week. The trade war has been taking its toll on the American agriculture industry, which is heavily dependent on exports.

But even before President Trump took office, parts of the American farming industry have been dealing with another problem: oversupply. Agricultural products including pork, chicken, grain and dairy have seen years of low prices amid an ongoing glut.

Dairy is a key example. Milk prices have been low since 2014, when prices plummeted after years of growth in production.

“We really do have too much milk on the market,” said Sarah Lloyd, who runs a 400-cow farm in Wisconsin, the Nelson family dairy farm.

Before 2014, milk prices had been rising. Back then, farmers saw the value of their commodity increasing, and many decided to expand.

“It was this domino effect, where each dairy farm was trying to become bigger,” said Naomi Blohm at the advisory firm Stewart Peterson.

“The Nelson family farm has been in business for over 100 years,” Lloyd said. “We’re really just digging deep into the asset base that the generations have built.”

The dairy industry has had plenty of help from the government. Federal subsidies have been estimated to make up as much as 73% of dairy farm income.

“Farm prices go up and down,” he said. “That’s part of the business.”

What’s unusual this time, Sumner said, is how long prices have been low. It’s not just dairy — prices for a lot of agricultural commodities have been down for several years. By now, he says, they should have recovered.

“That hasn’t really happened for a lot of commodities, in part because they’re so sensitive to the international trade turmoil,” Sumner said.

China is the fifth-largest market for American agricultural exports. Before the trade dispute, it had been a top export market for years. With that market closing off, supply’s building up in the U.S.

California and Wisconsin, the two biggest milk producers, are receiving almost $130 million in aid to cope with the trade war. Sumner said prices are also staying low because the industry’s also getting more productive.

“That means that those people can produce crops and livestock products at slightly lower prices,” he said.

Dairy prices are starting to rise a bit this year. Dean Foods, the biggest milk producer in the US, said this week its paying more for the milk it sources.

Part of that is due to a rainy spring, which made it harder for farmers to plant feed crops, increasing production costs. Then, there’s lower production itself, with dairy farms going out of business.

But Lloyd said reduced milk production could help farmers in the long run.

“We just really need to talk to people about hey, what if you produce less and got paid more,” Lloyd said.

The National Farmers Union has called for a government incentive program to better control the dairy market. That could mean capping production, or charging a fee if farmers want to expand.

So far, nothing’s made it through Congress.