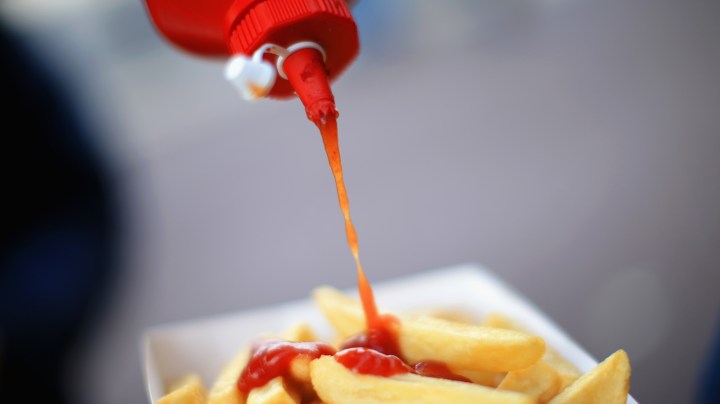 Walk down the condiment aisle at your local grocery store, and you’re likely to see at least half a dozen different varieties of ketchup. Beyond classic tomato ketchup, there are now organic versions, as well as ones with no added sugar, salt or artificial sweeteners.

As American diners have become more adventurous — and grocers have added more hot sauces and curries to store shelves — ketchup sales have stayed pretty flat, Richardson said, at around $1 billion a year.

“The development of some of these new variations of ketchup, whether it’s with different ingredient formulations or more exotic flavor profiles, has been to an effort to retain the customer base for ketchup that might otherwise have gone in search of something more exciting,” he said.

Or something that at least seems more healthy. Hunt’s, made by Conagra, just released a new “Best Ever” ketchup that’s made with sugar instead of high-fructose corn syrup. Meanwhile a lot of the growth at Heinz, still king of ketchup, is coming from its organic, sugar-free and salt-free varieties, according to Molly White, head of marketing for sauces and condiments.

“That better-for-you segment, for us,” she said, “represents more than 15% of our sales, and it’s been growing year-over-year.”

“Part of the dilemma they’re in is they’re $31 billion in debt,” she said. “So any bit of erosion, any bit of pressure on their market share or footprint is going to drop right to the bottom line and cause harm.”