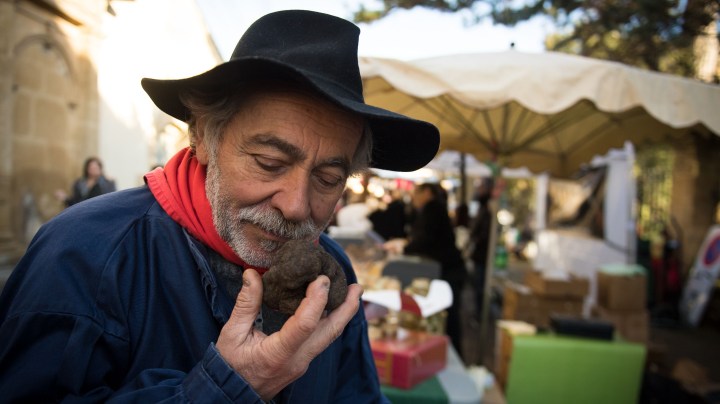 COPY
An inspector approved by the regional federation of truffle harvesters smells a black truffles (tuber melanosporum), on December 23, 2018, during an inspection at a truffle market in Rognes, southeastern France. GERARD JULIEN/AFP/Getty Images

An inspector approved by the regional federation of truffle harvesters smells a black truffles (tuber melanosporum), on December 23, 2018, during an inspection at a truffle market in Rognes, southeastern France. GERARD JULIEN/AFP/Getty Images
Listen Now

It’s one of the most coveted natural commodities in the world. Found in the buried deep in the earth, bought and sold under the cover of night and sparking intrigue across the globe for centuries.

No, not diamonds. We’re talking about the truffle, the highly sought-after, highly expensive fungus that sent one writer on an international adventure.

David Brancaccio recently spoke to Ryan Jacobs, author of “Truffle Underground: A Tale of Mystery, Mayhem, and Manipulation in the Shadowy Market of the World’s Most Expensive Fungus.”

Ryan Jacobs: Yeah, I was actually looking through the international headlines one day, and there was a story in Germany where porcini foragers ran over a forestry guard. And I thought that was kind of weird, so I called up a porcini expert in the U.K., and he said, “That’s not normal, but if you’re looking for a really weird true crime story, you should look into the truffle business.”

Brancaccio: The truffles are so dear, they’re so expensive, that there’s, what, essentially, a black market for this, and there’s poaching and thefts?

Jacobs: Yeah. The truffle hunters are fiercely territorial. You have guys who are poisoning rival truffle hunters’ dogs. It might be with strychnine, which is a colorless odorless toxin that they put in meatballs, and that sort of thing. People use shards of glass, sometimes, and they’re basically just trying to eliminate the competition during very short seasons in which you can get a lot of cash for this stuff; up to €6,000 per kilogram for the white truffle, which cannot be cultivated.

Brancaccio: So the truffle harvesting season is short. How short is it?

Jacobs: For the the white Italian truffle, you might not get them until late September, probably closer to early October, and then the season is over pretty much by New Year, which creates a fierce amount of competition. And that’s why you have guys who are, you know, torching people’s cars. You might get a shattered window, and then at the most brutal form of sabotage, you might have your dog either stolen, because it’s really good at finding truffles and they want to use it, or you might have your dog poisoned by these booby traps that are left in the forest.

Brancaccio: Because these things cost such a fortune, sometimes one kind of truffle is passed off as another, or sometimes it’s not even actually truffle if it says “truffle.”

Brancaccio: You’ve got this very vivid character in the book, among many, the detective from southeastern France, André Faugier. Tell me a bit about him.

Jacobs: You have these armed gangs that go in at night looking for truffles with with trained dogs, and they might dig up your entire grove in the night, and you may have spent your entire life, or many years of your life, trying to get the truffle to fruit. And then, one night, all of your truffles are gone. So his job is to figure out which groves are going to be most productive and then to send out patrols during the night to catch these thieves. The problem is they’re often not catching the guys who are ordering the heist. They’re often catching the teenagers that are sent in by these guys. Much like the U.S., there’s leniency for minors, so there’s no way to catch the people who are plotting these heists. And it’s a serious issue because, in 2010, a truffle farmer was so upset that these thieves were targeting him that he ended up killing someone in his grove.

Brancaccio: Did did you develop more of a taste for truffles with all this reporting, or less?

Jacobs: It’s a complicated question because you have this moral calculus. You know, this might have been subject to theft, this might have been subject to dog-poisoning. You don’t always know exactly what you’re eating. But when I was out there in Italy, this person at one of the major truffle companies just shaved all these white truffles over my tagliolini noodles, which were served in sort of a butter and meat broth sauce and, I just, it was so intoxicating. It’s kind of an indescribable experience. It just takes you into a another plane of existence. I think the best analogy is probably sex or drugs. So, yeah, I developed a taste for them. But it’s a complicated relationship. 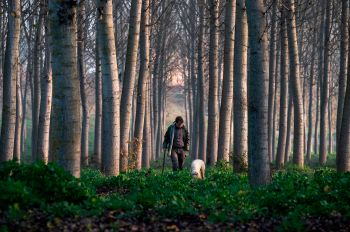