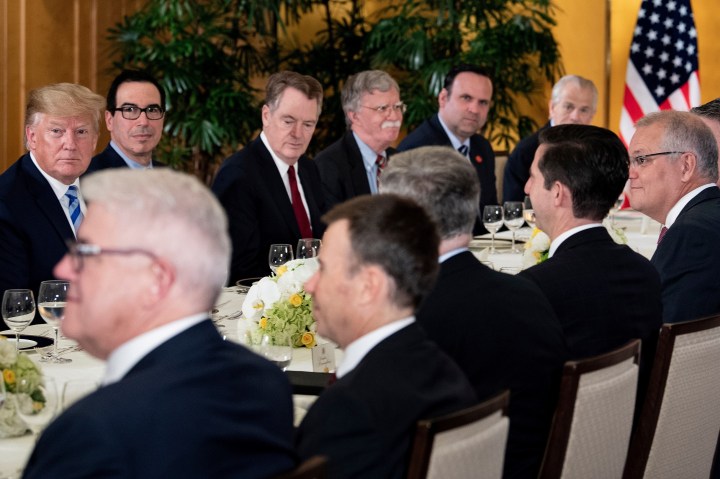 U.S. President Donald Trump at a dinner at the Imperial Hotel in Osaka on June 27, 2019. BRENDAN SMIALOWSKI/AFP/Getty Images

U.S. President Donald Trump at a dinner at the Imperial Hotel in Osaka on June 27, 2019. BRENDAN SMIALOWSKI/AFP/Getty Images

A group of the world’s largest economies — accounting for more than 80% of global GDP — have descended on Osaka, Japan, for the annual G-20 summit. But the process of gaining admission to this elite club is contentious. Why don’t certain countries get representation?

Some of the major parties involved include the United States, Russia, the entirety of the European Union, and Japan, whose agenda as host country this year focuses on climate change, women’s empowerment, trading reform and the digital economy.

Outside of these general points of discussion, world leaders will likely mingle with one another on the sidelines and hash out their specific concerns (all eyes are on President Donald Trump and Chinese President Xi Jinping, who are expected to talk trade after negotiations broke down in May).

While participants certainly have significant economic clout, the list of G-20 countries isn’t actually a precise ranking of the top 20 biggest economies on a global scale.

Click a country below to view its nominal GDP.
*Figures from the International Monetary Fund.

Stewart Patrick, director of international institutions and global governance program at the Council on Foreign Relations, says there is some element of arbitrariness in the selection process.

Switzerland, for example, has the 19th highest nominal gross domestic product in the world (which is its GDP without adjusting for inflation), based on data from the International Monetary Fund. Yet it’s not part of the group. The country has tried joining in the past, but some G-20 member nations like Brazil have opposed it, arguing it would make the group too “Euro-centric.”

Spain, while part of the European Union, also has one of the world’s highest GDPs. But it’s considered a “permanent guest” at the G-20, without the individual representation enjoyed by other EU countries, such as Italy and the United Kingdom.

Meanwhile, countries that rank outside of the top 20 highest GDPs, such as Argentina, are part of the G-20.

Rich and powerful nations, much like rich and powerful people, tend to want to keep close and talk amongst themselves. So it makes sense that different iterations of the G-20 have existed for decades.

The group itself was formed as an offshoot of the G7, a select group of countries that banded together to discuss the 1973 oil crisis, when Arab countries imposed an oil embargo on the U.S.

“[The G7] shares a lot of common values, like a liberal economy, free trade, democracy and so forth,” said Peter Hajnal, a member of the G-20 Research Group and a research associate at the University of Toronto’s Munk School of Global Affairs and Public Policy. “In the case of the G-20, I think an important distinction is that, rather than common values, I would say what holds them together is common interests.”

Hajnal added that those interests include combating climate change, corruption and inequality.

You can trace the G7 slightly further back in time to the G5, which the New York Times described as “an international Skull and Bones that meets in French chateaux, English country houses or on Presidential yachts on the Potomac.”

This group — which included finance ministers from the U.S., Britain, France, what was then West Germany and Japan — first met in 1967.

Decades later, the G-20 first convened in response to a series of financial crises occurring in the 1990s, including the 1997 Asian financial crisis, which pushed some Asian countries into a recession and led to spillover effects in Latin America and Eastern Europe.

Timothy Geithner, the U.S. Under Secretary of the Treasury for International Affairs, and Caio Koch-Weser from the German Finance Ministry, picked the countries.

“Geithner and Koch-Weser went down the list of countries saying: Canada in, Spain out, South Africa in, Nigeria and Egypt out, and so on,” wrote political scholar Robert Wade in the Cambridge Journal of Economics.

The way Stewart Patrick described the G-20 admission process made it partly sound like a rich kid’s house party.

One joke that’s made the rounds is that Argentina is a member because its former economy minister, Domingo Cavallo, was Harvard roommates with Larry Summers, the Secretary of the Treasury at the time, according to Patrick.

Then you have Spain, which wasn’t given an invite, but decided to show up anyway.

“In a sense, they crashed the party,” Patrick said. “They sort of objected that they weren’t included, and given that their economy was pretty large at the time, there was, basically, a desire to accommodate them.”

And there are longstanding issues to do with underrepresentation: as Hajnal points out, South Africa is the only country in Africa that’s a member.

Changes since the G-20’s formation

Finance ministers and bank governors first served as representatives of the G-20. But in response to the 2008 financial crisis, leaders of G-20 countries began the tradition of meeting each other on an annual basis for a two-day summit (which has also included representatives from groups like the African Union and the Asia-Pacific Economic Cooperation).

In 2009, the G-20 leaders agreed to provide the International Monetary Fund and the World Bank with more than $1 trillion to combat the Great Recession.

“Initially it was really about macroeconomic stability and saving the global financial system — putting liquidity into everything,” Patrick said.

Now, the talking points at these G-20 meetings tend to be more sweeping in nature, which has led experts to argue the first few summits have remained the most effective.

“Unless you face an acute, clear and present crisis, you’re not going to get major change from 20 diverse, heterogeneous governments,” Patrick noted.

But he still thinks it’s important for leaders of these countries to meet face-to-face and get the chance to have informal talks.

“There is some value in getting these folks together,” Patrick said. “Partly just because it’s in place for the next crisis, and there will be one at some stage — and climate change arguably is [one] now.”