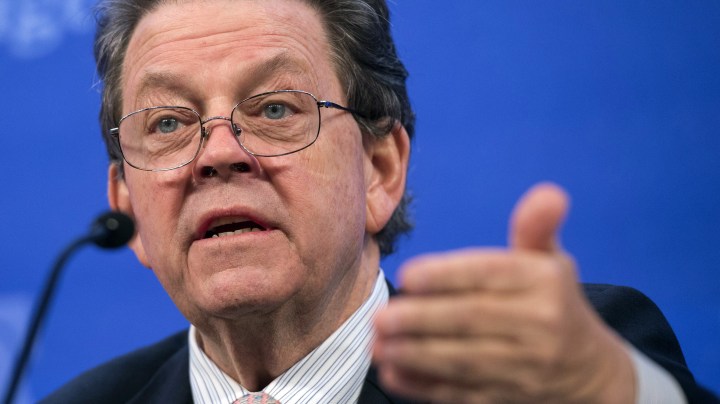 COPY
Economist Arthur Laffer speaks about the economy during a panel discussion at the Heritage Foundation on December 18, 2014 in Washington, DC. SAUL LOEB/AFP/Getty Images

Economist Arthur Laffer speaks about the economy during a panel discussion at the Heritage Foundation on December 18, 2014 in Washington, DC. SAUL LOEB/AFP/Getty Images
Listen Now

The medal is the nation’s highest civilian honor, for “especially meritorious contribution to the security or national interests of the U.S., to world peace, or to cultural or other significant public or private endeavors.”

“If you start to increase the tax rate, and you start at zero, tax revenue does go up,” explained Kent Smetters, a professor at the Wharton School and faculty director of the Penn Wharton Budget Model. “But eventually if you keep increasing the tax rate, the tax revenue will actually fall.”

If people were taxed at 100%, for example, they would be unlikely to work. So the idea is that, somewhere, there is a “Goldilocks” level of taxation — one that’s not too high, or too low, but just right to maximize government revenue.

“The disagreement, really, is about where does that peak happen,” said Smetters.

The backers of the Trump tax plan, for example, believe that Goldilocks level is low – lower than the tax rates when the law was passed. They supported the Trump tax cuts by arguing the cuts would make the government more money. A year and a half later, that still hasn’t happened.

“We’re looking at much larger budget deficits thanks to revenue losses from these tax cuts,” said Jared Bernstein, senior fellow at the Center on Budget and Policy Priorities. “And the channels by which the growth effects are supposed to occur haven’t been happening, either.”

For decades, politicians have been fighting over where that Goldilocks tax rate is, citing the Laffer curve. It’s unlikely they’ll stop any time soon.