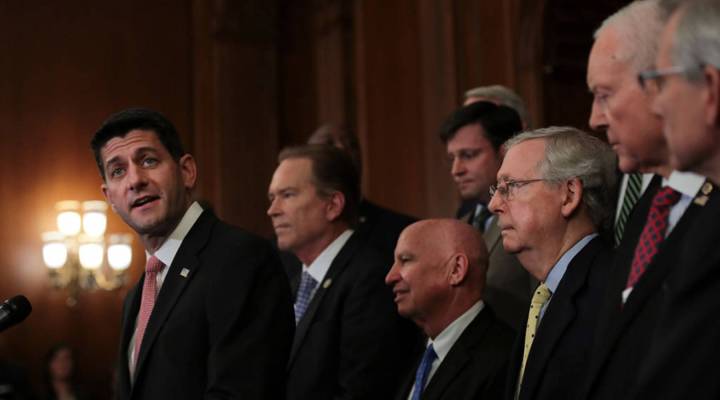 Republican tax policy focuses on one central idea: If you cut taxes, the economy will grow. Now the man who helped write that doctrine says it’s a myth. Bruce Bartlett, author of “The Truth Matters,” was an economic policy adviser for presidents Ronald Reagan and George H.W. Bush. And during the 1980s, he championed the idea that tax cuts would equal growth in the economy. In a recent op-ed in the Washington Post, Bartlett debunks the myth that, as he puts it, he helped create. Marketplace host Kai Ryssdal talks with Bartlett about the GOP tax myth and why it’s lasted so long.

Kai Ryssdal: Do me a favor and remind us what the Republican tax myth is.

Bruce Bartlett: The biggest Republican tax myth is that we had vast prosperity in the 1980s that dwarfed the growth in any other time period and that was totally and exclusively the result of the 1981 tax cut. And this is just total mythology. Real economic growth in the 1980s was less than it was in the 1970s or the 1990s.

Ryssdal: And yet, now here we are, a generation or more later, and tax cuts are still, you write, the go-to solution for Republicans.

Bartlett: That’s right. They believe in one-size-fits-all economics or “cookie cutter” economics, if you’d rather. There’s one policy and one policy only to deal with any economic problem that ever comes up. And that is tax cuts for the rich.

Ryssdal: The theory being, of course, that if we cut taxes on the rich and if we cut taxes on companies, that money will get out into the rest of the economy. Workers will get that $4,000 wage that the White House talks about and everything’s going to be rosy.

Bartlett: Of course, this is just complete nonsense. I think in their heart of hearts they believe that only the wealthy really help the economy, and they believe that the wealthy just carry the rest of us on their backs, that we’re all worthless, and only the Charles Kochs and Robert Mercers of the world really add economic value to the economy, and, of course, this is just utterly ridiculous.

Ryssdal: So what’s the answer then to what might constitute a sensible overhaul of the American tax system? Because everybody pretty much agrees it’s cumbersome and bloated and it needs to be reshaped for a new economy. What’s the answer?

Bartlett: Well, I think they should follow the example of Ronald Reagan. The 1986 tax reform was a very good piece of legislation. And the reason it worked is three key principles were followed: They got rid of tax loopholes to pay for a reduction in tax rates. Secondly, it was distributionally neutral. It gave roughly the same percentage tax cut to everybody regardless of their tax bracket. And the third thing is it was genuinely bipartisan. And the Republicans today rejected all three principles.

Ryssdal: What about this idea that you hear from Treasury Secretary Mnuchin quite a bit and also Gary Cohn that these tax cuts are going to pay for themselves with economic growth?

Bartlett: No tax cut in history has ever done that. We just had a recent example in the state of Kansas where Arthur Laffer promised that the huge tax cut that the Republicans enacted would pay for itself. And of course it did not. Revenues hemorrhaged and the first reaction that Republicans had, they said, “we must cut spending for education, for the poor, for roads for many many other programs that that are popular with voters. And eventually they did finally have to reverse themselves. I think that pretty much the same thing is going to happen at the federal level.

Ryssdal: Myths become myths because they endure for a very long time. Why do you think this Republican tax myth has lasted so long?

Bartlett: I think part of it is simple ignorance. People don’t know history. But, a part of it is that they believe what they want to believe. They want to believe that taxes are too high. I mean, Donald Trump constantly says we’re the highest taxed nation on Earth, which is just a rank lie. I don’t think he’s confused. He’s been told by his own staff on many occasions that that is absolutely not true. But he keeps saying it because unfortunately there are a lot of people in his party who simply want to believe that, and they don’t care whether it’s true or not.