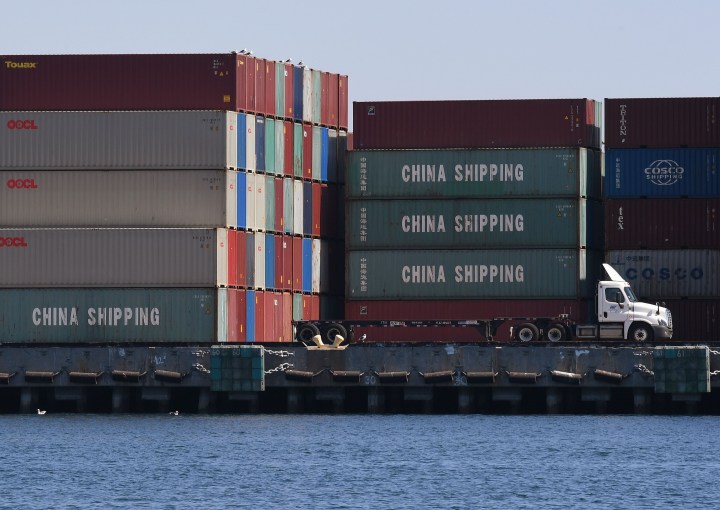 COPY
Chinese shipping containers that were unloaded at the Port of Long Beach in Los Angeles County in 2018. Mark Ralston/AFP/Getty Images

Chinese shipping containers that were unloaded at the Port of Long Beach in Los Angeles County in 2018. Mark Ralston/AFP/Getty Images
Listen Now

Tariffs are like walls against the outside world. There are tariffs on outside steel and aluminum and tariffs on a long list of Chinese goods.  The president is still thinking about tariffs or restrictions on imported automobiles. What happens when tariffs are here to stay?

“It breeds a kind of laziness here,” said Simon Lester, director of the Herbert A. Stiefel Center for Trade Policy Studies at the Cato Institute.  Tariffs are taxes on outside goods, so they inherently protect some U.S. businesses from foreign competition. “You don’t have to compete with the best in the world you can just relax you don’t have to work that hard and face any competition,” he says.

U.S. steel companies, for example, don’t face as much pressure to upgrade plants now; they can and are raising prices without competition from foreign steel producers.

The more businesses don’t have to compete, the less pressure to be competitive.

“Ultimately, I think if you want successful businesses, you want them competing in order to be as efficient as possible,” Lester said.

Chinese goods don’t usually compete with U.S. goods head on — U.S. goods run more high end. But many goods that are made in America are made with Chinese parts. Tariffs make those parts more expensive. Tim Kehoe, professor of economics at the University of Minnesota, said this has the same end result: less competitive U.S. businesses.

“It makes things the U.S. sells to the rest of the world more expensive, and we’re going to lose market share because of that,” he said.

As other countries pursue trade agreements that do not include the United States (the Trans-Pacific Partnership, European trade agreements with South America and Japan for example), U.S. businesses are further put at a disadvantage, Kehoe said.

“You have the [European Union] running around the world signing trade agreements … and the losers to that are gonna be American exporters because they won’t have the kind of market access those inside those agreements have.” And, of course, there are the retaliatory tariffs that would reduce the competitiveness of some U.S. exporters (agricultural exporters trying to sell into China, most notably).

Take the tariffs on steel and aluminum. The metal that would be going into the United States now goes to global markets, increasing supply, and depressing prices outside the U.S.

“Many of my manufacturers say this has a direct impact on their competitiveness not only because their costs go up but actually their foreign competitors costs go down,” according to Rufus Yerxa, president of the National Foreign Trade Council. The more an industry’s protected, he said, the less productive it’s likely to become.