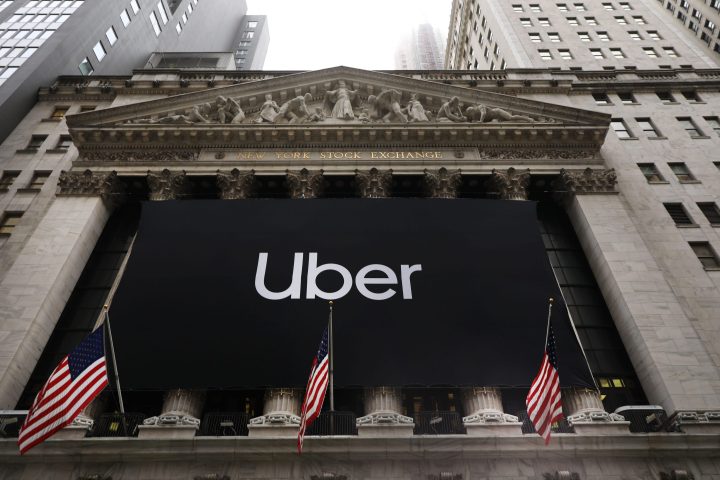 COPY
An Uber banner hangs outside of the New York Stock Exchange as the ride-hailing company makes its highly anticipated initial public offering on May 10. Spencer Platt/Getty Images

An Uber banner hangs outside of the New York Stock Exchange as the ride-hailing company makes its highly anticipated initial public offering on May 10. Spencer Platt/Getty Images
Listen Now

Uber had its much-anticipated initial public offering Friday — despite losing $1.8 billion over the last 12 months, which makes it the all-time biggest money-losing IPO.

The results were less than spectacular: Uber priced its shares toward the low end of estimates at $45 a share. They opened at $42 and closed at $41.55.

Meanwhile, shares in Uber’s rival Lyft have lost nearly a third of their value since that IPO back in March.

Investing in an IPO is a gamble. But investors want to be somewhat confident that the gamble is going to pay off down the road.

That’s why people are taking a hard look at Uber’s business model.

“It is money-losing right now, which is just a way of saying they’re paying us to use it,” said Mihir Desai, a finance and law professor at Harvard.

He points out that Uber has been subsidizing rides, paying bonuses to drivers and covering other big expenses with venture capital at first and now with capital from the equity markets.

“That is sustainable for a little while you’re growing,” he said. “The question is whether they can get off ever doing that.”

In order to start making money, Uber will likely have to raise prices for riders and cut pay for its drivers, said Rachel Binder, who covers the automotive and mobility industries for CB Insights.

And, ultimately, she said, “the way that the company will become profitable is largely dependent on if they can get rid of the drivers completely, which will rely on self-driving technology.”

But there’s not really a firm timetable for when that will happen. And when it does, nobody knows how much money it will save.

And until then, drivers are still very much part of the equation, said Harry Campbell, who drives for Uber and Lyft and blogs at The Rideshare Guy.

“Companies are talking about the self-driving narrative, but until they don’t need drivers, they need drivers more than anything,” he said.

Those drivers want their own piece of Uber’s potential profitability — and even went on strike for it earlier this week.