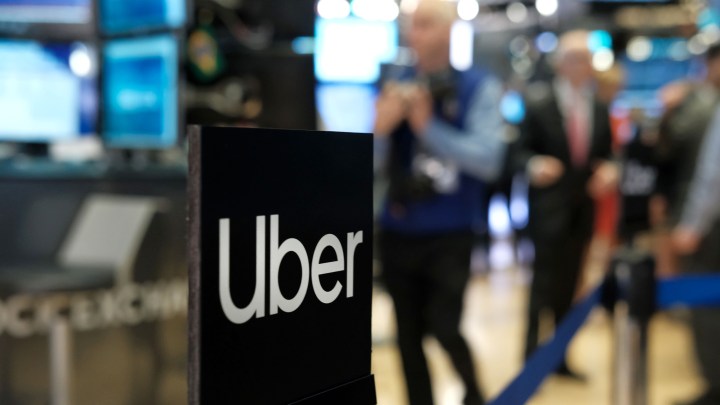 COPY
An Uber sign is displayed as traders work on the floor of the New York Stock Exchange (NYSE) before the Opening Bell at the NYSE as the ride-hailing company Uber makes its highly anticipated initial public offering (IPO) on May 10, 2019 in New York City. Spencer Platt/Getty Images

An Uber sign is displayed as traders work on the floor of the New York Stock Exchange (NYSE) before the Opening Bell at the NYSE as the ride-hailing company Uber makes its highly anticipated initial public offering (IPO) on May 10, 2019 in New York City. Spencer Platt/Getty Images
Listen Now

The ride-hailing company Uber went public Friday in one of the biggest initial public offerings in history. Uber, however, did not seek every penny it though it could get from investors in its IPO. The company priced its initial shares at $45 per share, at the low end of a price range the company and the banks it enlisted for help with its IPO had originally suggested.

Global economic tension about a deepening trade war between the U.S. and China and the poor performance of Uber’s chief rival, Lyft, likely explain why Uber chose that lower share price. Even so, once a company goes public, the market decides what stock price it’ll bear, and Uber’s share price dipped once trading opened.

How do companies come up with those IPO prices in the first place?

It’s important to understand the three players in determining an IPO’s price.

The company and the financial firms underwriting the IPO will develop a targeted range for the share price — essentially a prediction about the highest and lowest prices investors will be willing to pay.

The range is informed by examining things like the valuation of other, similar companies, the state of the global economy and individual details about the company seeking to go public.

From there, you have to understand what each player wants.

What the company wants

As the seller of shares, the company typically wants to find the highest price at which investors will snap them up. If the stock goes up after public trading begins, the company has essentially given investors a discount in buying shares of the company. But the company also does not want to see its stock plummet after shares begin trading publicly due to an inflated IPO price.

“In general, what the company would like is to start trading very close to the offer price. Not a lot lower but also not a lot higher,” said Jay Ritter, a finance professor at the University of Florida.

“On the other hand, they don’t want the embarrassment and potential lawsuits if the price drops precipitously.”

Lyft initially offered its shares at $72 apiece, but during the first month after it went public, its stock price fell by about 25%.

Likely hoping to avoid a similar scenario, Uber chose to set the share price near the lowest end of its targeted range, even though its IPO was oversubscribed, meaning it had more investors willing to buy shares than were available.

In general, investors buying shares at the offering price want to pay the least, meaning the lowest price per share they can get. Then, when the stock bumps up once public trading begins, these investors have instantly made a profit.

But Santosh Rao, head of research at Manhattan Venture Partners, says IPOs are also very popular with investors right now, and some will disregard an inflated share price.

“It’s IPO fever right now,” Rao said. “Some investors just want to get in there. You get bragging rights, other than the fact that they’re good investments.”

Underwriters are responsible for finding investors who will accept the offering price. Before an IPO, the company and underwriters will go on a “road show” to whip up interest, attract investors and possibly raise the targeted range for the share price.

Unlike in public trading, where any interested party can buy shares for sale, in an IPO the underwriters are largely responsible for deciding which investors will get shares. In return for their help, companies pay underwriters a fee for their work.

But, Ritter explains, underwriters also have an incentive to urge a lower share price.

“And that encourages the hedge funds and mutual funds to be very profitable customers. They’re willing to overpay the commissions on other transactions.”

No one knows anything

Ultimately, figuring out the price to sell shares to investors in an IPO relies on the interplay between the company, underwriters and investors, as well as a degree of guesswork.

“Pricing, in general, at a very high level, is more an art than science,” said Rao.

“It is actually a very difficult process to price an IPO,” said Matt Kennedy, a senior IPO market strategist at Renaissance Capital. “A company can pop 150% like [the company] Beyond Meat, another can drop 20%.”

Uber’s IPO is instructive, because the company has such a wide range of development opportunities and possibilities. Uber is the opposite of profitable; it loses billions of dollars each year. But it also dominates the ride-hailing industry, with ambitions to expand even more.

“Uber could be the world’s global transportation platform or it could be a dud,” Kennedy said.