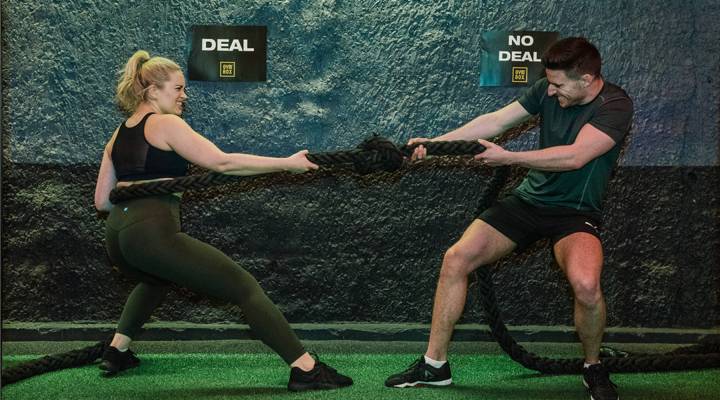 COPY
Brexit is the leading source of frustration in the U.K., says Gymbox's Rory McEntee. "We wanted to provide an outlet for all the pent-up emotion." Courtesy of Gymbox
Brexit

Brexit is the leading source of frustration in the U.K., says Gymbox's Rory McEntee. "We wanted to provide an outlet for all the pent-up emotion." Courtesy of Gymbox
Listen Now

Brexit is taking its toll on British nerves. Civil servants, stressed out by the hectic preparation for Britain’s departure from the EU, have been offered counselling by the government. Police chiefs, worried about public unrest, have warned Brexit protesters — on both sides — to keep their tempers under control.

According to poll results released this week, 64 percent of residents think that all the wrangling over Brexit is damaging their mental health. Tension over the government’s lengthy and  fraught attempt to implement the result of the 2016 referendum on EU membership is clearly rising.

One London gym chain, Gymbox, has hit on a possible antidote: Brexercise.

“This subject is the number one source of frustration in this country today,” Gymbox marketing director, Rory McEntee, told Marketplace. “We wanted to provide an outlet for all the pent-up emotion and came up with the idea of a class we call ‘Brexfit.’ It’s a way for people to come together and vent their anger in a healthy way.”

Participants spend up to 45 minutes on a series of intense, Brexit-oriented exercise routines. They pummel punchbags bearing either an image of Prime Minister Theresa May or that of her chief European adversary, EU Commission President Jean-Claude Juncker. They lift a weighted ball plastered with a picture of leading Brexiteer Nigel Farage, and slam it to the ground. A rowing machine has been named the “Rowmoaner,” a reference to the Brexiteers’ taunt that that people who want to stay in the EU are “Remoaners.” And replicating the Prime Minister’s stumbling negotiations — which critics have deemed a result of her incompetence — there’s the Theresa May potato sack race.

Participants in Gymbox’s “Brexfit” class pummel punchbags bearing either an image of Prime Minister Theresa May or that of her European adversary, Jean-Claude Juncker.

Exhausted participants can slump in a rest area signposted “Cameron’s Quitter’s Corner,” named after the former Prime Minister David Cameron’s decision to resign immediately after he lost the Brexit referendum.

It’s a great marketing wheeze, of course. But trainer Boriss Visokoborskis insists that Brexercise serves a practical purpose, too. “What we’re trying to do is get that rage within our members and use it as a motivational tool, in order for them to work harder and perform better in the exercises,” he said.

The “Brexercises” have been a hit. Classes are fully subscribed and, as Rory McEntee acknowledged, the gym equipment is taking one hell of a beating. “We’ve had to replace quite a few  punchbags. And the slam ball bearing Theresa May’s face disintegrated, twice,” he said.

Gymbox insists the class is open to both sides of this divisive argument, but during our visit to the gym, Marketplace did not meet any “Leavers.” This was hardly surprising, given the central London location, and the many young professionals participating — that’s the demographic that voted most heavily to remain in the EU. However, they all enthused about the class. One participant described it as “great anger management.”

Oddly enough, the class is beginning to imitate Brexit. The sessions are frequently extended. Last week’s class was postponed. Brexfit seems likely to run and run.