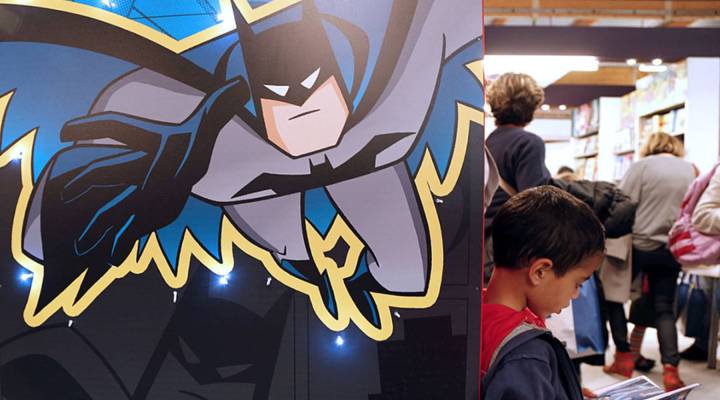 Happy birthday, Batman! For eight decades, the Caped Crusader has kept watch over the streets of Gotham City and beyond, fighting crime, answering batsignals and go-go dancing at clubs.

In honor of the Dark Knight, let’s do the numbers.

From comics to television to Lego to the big screen, Batman has become one of the largest franchises in history, making an estimated $23.8 billion since the superhero first swept onto the scene in 1939’s “Detective Comics” #27.

The comic book, which introduced Batman as an “avenger of evil” who was a “weird figure of the dark,” sold for 10 cents during its initial run.

A copy of issue #27 was purchased for $1,075,000 in 2010. That makes it the third-most expensive comic book ever sold, behind “Amazing Fantasy” #15 and “Action Comics” #1, the first appearances of Spider-Man and Superman respectively.

You can’t talk about Batman without talking about his alter ego, Bruce Wayne. Orphaned at a young age and heir to the family fortune, Wayne’s personal wealth is estimated at a whopping $11.6 billion by Lehigh University students. They figure Wayne Enterprises is worth $23.22 billion.

Batman is the third-wealthiest superhero, beating out fictional magnates including Superman nemesis Lex Luthor, Oliver Queen (aka Green Arrow) and Charles Xavier of the X-Men, according to CBR.

Wayne Manor, the not-so-humble abode of the playboy billionaire, is valued at $137 million by Money. And that’s not including any upkeep and property tax, which the website calculates at $1.6 million per year. At the end of Christopher Nolan’s “Batman Begins,” the manor is destroyed, and rebuilding both Wayne Manor and the Batcave would cost about $600 million, according to Mashable.

To keep Wayne Manor running smoothly, you need Alfred Pennyworth, Wayne’s longtime butler and confidant. It’s hard to put a price on the quick-witted Pennyworth, but according to the International Butler Academy, he could earn between $50,000 and $150,000, plus benefits, per year.

Let’s not forget the gadgets in Batman’s utility belt. From batarangs to grappling hooks, Batman has a plethora of specialized tools to aid his crime fighting. According to estimates from Mashable, a grappling hook launcher costs $50,000, while three exploding batarangs cost $1,000.

From the city shadows to the silver screen

Since the 1960s, Batman and his bat-companions have been portrayed on TV, in cartoons and on the silver screen.

In the early 1960s, ABC purchased TV and movie rights to Batman from National Periodical Publications, now known as DC Comics, for $7,000.

ABC then produced a live-action TV show, starring Adam West as Batman and Burt Ward as Robin, which aired between 1966 and 1968.

Holy (fill in the blank) Batman! Throughout the 1960s show, Robin’s catchphrase was uttered 352 times.

What about the original Batmobile from the small screen? It took $15,000 to transform a Lincoln Futura concept car into the 1960s Batmobile. In 2013, the car sold for $4.6 million.

As for the the Caped Crusader on the big screen? All together, the Batman movie franchise, including two animated features released in theaters, has grossed over $4.9 billion at the box office.