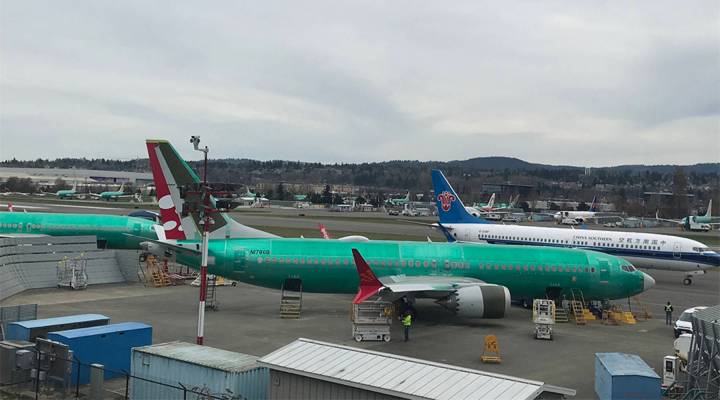 Editor’s note: Marketplace’s Mitchell Hartman is in Seattle. This is the first entry from his reporter’s notebook. Read his second entry here.

RENTON, Wash. — Standing on an overlook above Boeing’s sprawling lakefront aircraft assembly complex outside of Seattle, I see a different side of the 737 Max crisis that’s dominating the headlines right now.

This is where Boeing assembles the 737 Max. It’s a hive of activity. The factory churns out new planes as fast as its union machinists can make them. The central runway is lined with aircraft being painted with airline colors and logos for final delivery and being brake tested before their maiden flights. Finished planes are parked tight between buildings and right up to the edge of Boeing’s property next to a Hyatt hotel on Lake Washington.

Boeing has delivered nearly 400 of the new single-aisle mid-range jets to customers, and all of them are now grounded after crashes in Indonesia and Ethiopia. The company’s engineers and executives are scrambling to deliver hardware and software fixes to satisfy global aviation regulators and get the planes flying again.

From the view I got of the bustling, crowded Renton assembly complex, it’s clear that on the production side, nothing has changed. The company has orders for more than 4,600 of the workhorse 737 Max from airlines all over the world. The planes are Boeing’s cash cow. And so far, only a few airlines have threatened to cancel or modify their orders.

Every day, a few more 737 Max planes get spit out the end of the giant factory, which has been in operation since before World War II. Production is up to 52 planes a month, and it’s set to go even higher by summer. Boeing is scrambling to find skilled workers to staff its production lines across the region and has raised wages in the middle of a union contract to attract and retain workers.

Meanwhile, finished 737 Max aircraft are piling up in Renton and at other Boeing facilities across the region, with planes grounded worldwide and no airline wanting to take delivery or make payment on the planes they’ve ordered. But for the moment, the company has no choice financially but to keep producing planes at maximum capacity. And until Boeing can get the 737 Max aircraft already in service flying again, the logistical problems will mount.