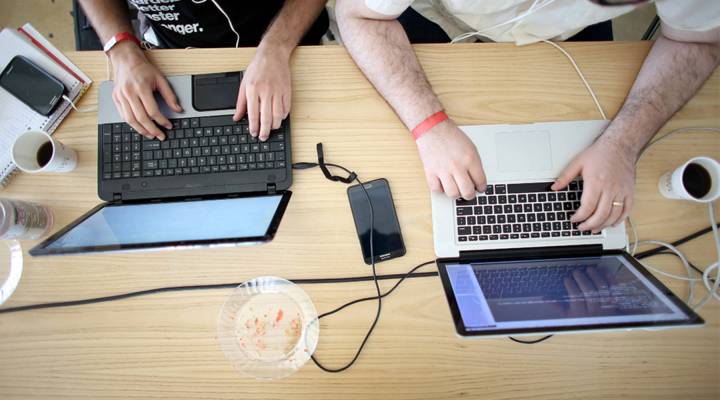 It’s spring, which means it’s time to clean! You’ve put your winter clothes in storage, swept, mopped and cleared out the gutters. But what about that laptop that’s littered with 10,000 photos, unsorted documents and a barely visible desktop? Since digital storage space is so cheap, it’s easy to keep amassing files. But that can take a toll on our work and our well-being. Marketplace’s Jed Kim talked with Deb Lee, a digital productivity coach. She helps people weed out the virtual messes they’ve gotten themselves into. The following is an edited transcript of their conversation.

Jed Kim: What usually inspires people to do a digital decluttering?

Deb Lee: Usually there is some sort of a pain point. You can’t find what you want, maybe you’re wasting time looking for what you want or you just can’t seem to focus. There’s usually some sort of pain that triggers the desire to start getting things organized and putting things in order.

Kim: How is doing a digital declutter different from doing a declutter of your house?

Lee: The good news is that it’s not that different. It’s pretty similar. You still have a goal that you’re trying to achieve. Most of us have things that we’re not using. Sometimes we have duplicates of things because we couldn’t find the original thing so we went out and got the next thing. It’s a pretty similar process. You have things that are lingering on your device that you’re not using taking up space that you could use for other things that you are using or want to use. How many times have we tried to take that photo and it says, “You’re running out of space. Sorry you can’t take that photo,” right? That usually becomes a pain point, and then we recognize, “I can’t capture these really important moments in my life because I’ve got all this stuff that I don’t use or I don’t need anymore.”

Kim: What do you find is the hardest part to declutter when it comes to our digital lives?

Lee: I think it’s the process of trying to fix it that, perhaps, sometimes stops us. That fear of, “Oh, goodness, it’s going to take all day or take too long for me to manage this.” I think that’s where some of that reluctance to tackle it comes about. Sometimes when it has to do with things like your photographs, they come with special memories. We feel attached to them. We remember those moments when we look at them. We think, “Well, we can’t get rid of this photo.” But if it’s the fifth iteration of the same photo then, yes you can. To make it a little bit easier, start with those things that are obvious, those duplicates, the blurry photos or the ones where you can’t make out exactly what it is that you took the picture of anyway, or those burst photos where you hold your finger on the phone so long that it just takes 500 at the same time. I know that because that just happened to me recently, but it’s easy to delete. Definitely make deleting and purging a regular habit so it doesn’t feel so much like a chore.

Not into the idea of digital decluttering? You could go the other way with digital hoarding. That’s the compulsion to save all things digital, like photos of every receipt you get or every single email you’ve ever received. It’s been studied. And some researchers think it’s a subtype of hoarding disorder. Witness the case in the British Medical Journal of a Dutch man who took and saved hundreds of digital photos every day. Turns out he hoarded physical objects, too.

Find yourself saving a lot of files? You don’t necessarily have a problem. Maybe you just get a kick out of collecting. Gizmodo has a deep dive into digital hoarding. It makes a distinction between hoarding and collecting. A digital collector might be the person who digitizes all the old family photos and video tapes. It can actually be a source of pride and positive feelings.

Finally, if you think ephemerality is the answer to digital clutter — by which I mean that some things can be put online with the expectation that they’ll disappear, like Snapchat — think again. An article in Wired questions the privacy expectations many people have with ephemerality. And, of course, there could always be a digital hoarder saving screenshots of what you’ve typed.