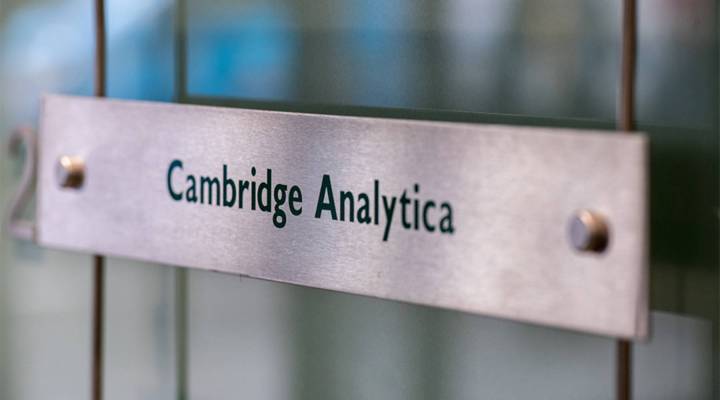 Many people are still active on Facebook, Twitter and Instagram despite digital privacy concerns. But even if you set out to truly understand all the information tech companies have about you, it’s close to impossible to get your hands on all of the data. Witness the plight of one American professor, who’s waging a multiyear legal battle against political data firm Cambridge Analytica, trying to see what it collected, bought and sold about him. It’s a David and Goliath story, and in this case David is David Carroll, a media design professor in New York. Marketplace’s Jed Kim talks about Carroll’s effort with Issie Lapowsky, a senior writer at Wired. The following is an edited transcript of their conversation.

Issie Lapowsky: He is basically a self-professed privacy nerd, and he just has this sort of lock box in his mind of every single privacy violation and what they add up to, how they connect and how they could be solved.

Jed Kim: So David Carroll, he got really obsessed with this British company, Cambridge Analytica. Tell me about that.

Lapowsky: During the 2016 election, Cambridge Analytica was working both for Ted Cruz’s campaign during the primaries and later for President [Donald] Trump’s presidential campaign. This company became kind of notorious in privacy circles because they had claimed to have collected thousands of data points on Americans to build these psychological profiles of every single adult in the United States. So, to a privacy-conscious person like David Carroll, that rings alarm bells. Once President Trump won the election, David Carroll really wanted to get to the bottom of what this company knew about him. So, because his company is owned by a British company, David was able to take his claim to the [United Kingdom] because in the U.K., there are data protection laws. So he requested his data from Cambridge Analytica. Cambridge Analytica was unwilling to give him all of his data, and that has set off this sort of two-year quest and a legal battle between him and the company trying to get his data back.

Kim: What was he hoping he’d learn by getting his data?

Lapowsky: He was hoping he would learn who was selling his data, how it had gotten from place to place. I think the problem with the data economy is we talk about it in the abstract. He really wanted to get each little piece so that he could track where they came from and where they ended up and how they got there.

Kim: Are there any other long-term implications in David Carroll’s quest to get his data?

Lapowsky: For one thing, because the regulator in the U.K. has affirmed that he has these rights, now any American can exercise these rights in the U.K. You can go to any U.K. company that you think might have processed your data and exercise these rights, which is an important breakthrough. Of course, it would be far more important if you had these rights to exercise in the United States. Think of the companies that we have here: Google, Facebook, all of these Silicon Valley giants that are processing data from people all over the world. If the United States guaranteed these rights, that would certainly guarantee those rights to a lot more people.