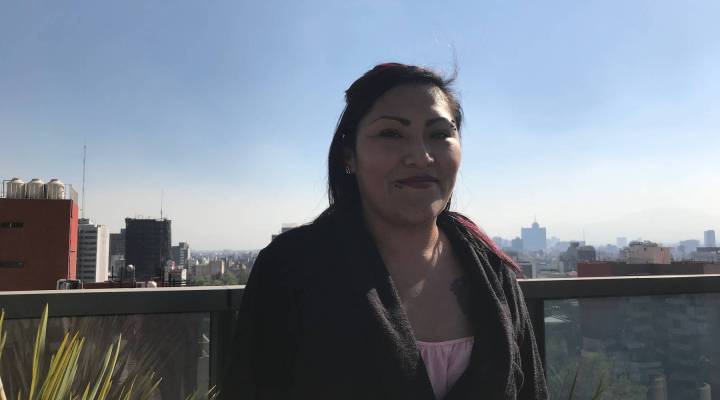 COPY
Jessica Gonzalez, an immigrant who grew up in Arizona, returned to Mexico after the signing of sweeping immigration law known as SB 1070. Jorge Valencia for Marketplace

Jessica Gonzalez, an immigrant who grew up in Arizona, returned to Mexico after the signing of sweeping immigration law known as SB 1070. Jorge Valencia for Marketplace
Listen Now

In 2010, shortly after Arizona had passed the controversial immigration law known as Senate Bill 1070, Jessica Gonzalez was riding a bus through downtown Phoenix when it passed a crowds of protesters and counter-protesters.

Gonzalez remembers being the only person with brown skin on the bus. When the protesters spotted her through the window, she said they began shaking the bus. As she recalled it, they yelled: “Alien! Go back to your country! Stop stealing jobs from people!’”

Then a high school senior in Phoenix, Gonzalez had migrated from Mexico as a teenager. She earned mostly As and Bs and wanted to enroll in Phoenix College to study biology and become a geneticist, but couldn’t afford it. As an undocumented immigrant, she says, she was ineligible for financial assistance.

A few months after graduation, Gonzalez decided to leave her father and siblings in Phoenix and look for a way to go to college in Mexico City, where she was born. “It was really sad because I wasn’t doing anything bad,” Gonzalez said. “There were people who wanted to help you, but there were also people who wanted to bring you down.”

Now 28, Gonzalez is one of more than one million undocumented Mexican immigrants who left the United States in the last decade, bringing migration from Mexico to a net zero, according to estimates by Pew Research.  In 2012, the U.S. Supreme Court struck down three provisions of SB 1070, but upheld the one that required Arizona law enforcement to check immigration status during stops.

Like many young returning migrants, Gonzalez faced challenges in transferring her American education and in finding work. Only in the last few months has she been able to find meaningful work, with the help of a software engineering boot camp that caters specifically to returnees.

When Gonzalez arrived in Mexico City, she took the standardized test for admission to the National Autonomous University of Mexico, one of the country’s most prestigious public schools. Twice, she didn’t make it in. She was admitted only to a significantly more costly private university. Already the mother of a young boy, she had to scramble for work, which she found at an English-language call center serving customers in the U.S.

Gonzalez handled calls for large American corporations for seven years. It was stressful work. She said American callers were often unhappy that the person helping them was in Mexico. “Sometimes, they were like, ‘No, you stupid Mexican. I don’t want to speak to you. I don’t want to talk to you. Transfer me to someone in America,’ ” she said. “It was really sad.”

Gonzalez still wanted to study biology, but she was earning less than $3 per hour. By then, she had three children, and it was hard enough to support her family, let alone pay for school. But last year, she heard about a school for migrants that would loan her tuition and a stipend until she got a job. She didn’t even own a computer, she said, but she knew it could be a route away from the call center. “I didn’t know what a software engineer was,” Gonzalez said. “I barely had any idea that that existed.”

Some 50 people have graduated since the school, Hola Code, opened in late 2017. Gonzalez, who was part of the second class of students, became one of the first graduates of her group to find work. “The students are their own agents of change,” said Bruno Torres, one of the mentors at Hola Code. “In terms of their job prospects and salaries, what they put in is what they get out.”

Back in Phoenix, where Gonzalez grew up, recruiters in the tech sector are struggling to fill vacancies. Jane McNamara, who was one of her teachers at North High School, says she’s disappointed Gonzalez didn’t stay. “We need people like Jessica in Phoenix,” McNamara said. “I think that it’s to all of our benefit to have young people like her in our community, working, raising families, and helping us benefit from what’s best about both countries.”

Gonzalez is now an engineer at Cuenca, a Mexico City-based financial services start-up, and she finally earns enough for her and her three children to live in their own apartment. When she worked in call centers, they could only afford to live in a group house. The last time she saw her father and siblings was in 2010, and she doesn’t know when she’ll ever get to see them again. But she says she has no interest in living in the U.S.

“I would like to visit my family, for sure. I miss them a lot,” she said. “But I don’t want to be undocumented anymore, anywhere.”