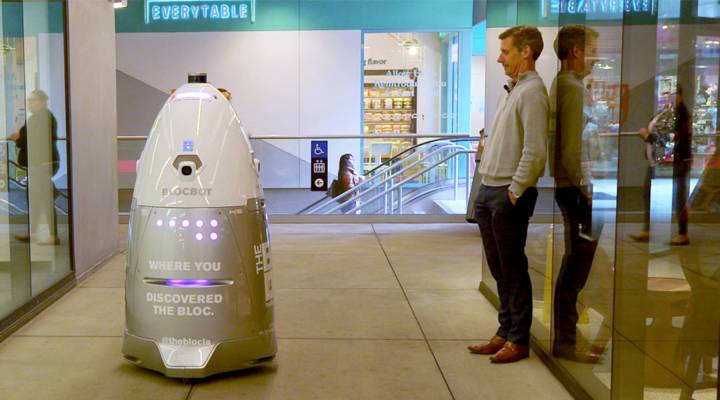 A few months ago, a mixed-use office and retail development in Downtown Los Angeles, The Bloc, hired a new security guard. Its name is Bloc Bot. Bloc Bot is a five-foot-tall, crime-fighting robot that moves about the outdoor shopping mall collecting real-time information with high-tech microphones, cameras and other sensors.

“He basically patrols the entire plaza.” said Dan Cote, general manager at The Bloc. “He moves around for approximately two hours and then, when his battery gets low, automatically goes back to his charging pad.”

Robots like this one are now patrolling malls, corporate campuses and stadiums in 15 states across the country. Knightscope, the Silicon-Valley based company that makes these robots, says it rents them out for $6-12 per hour, depending on the machine. On contracts running for 24 hours a day, 365 days a year, that’s an annual cost of between $52,560-$105,120

“You got to keep in mind that the employee turnover rates for security guards are 100 to 400 percent. It’s worse than the fast food industry. They can’t keep the people in the job,” William Santana Li, Knightscope chairman and chief executive, told Marketplace.

“Instead of handing the guard a number two pencil and a notepad, it might be smarter to give them a tablet or smartphone and give them access to three robots that now report to them. So they actually have some tools to do their jobs much more effectively,” Li said.

Correction (March, 15, 2019): An earlier version of this story misstated the cost of these robots.  The audio and online copy have been corrected.