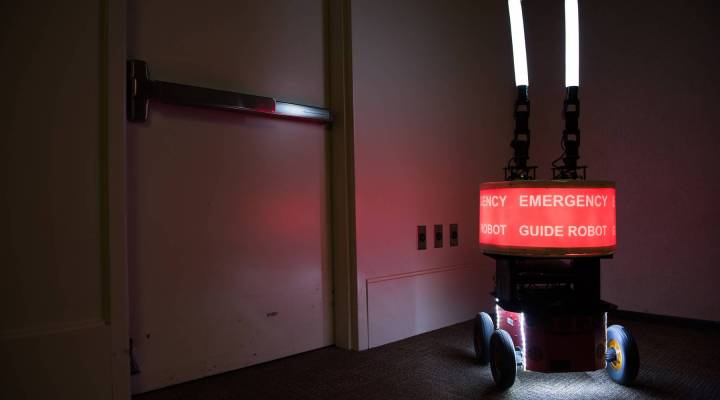 We’re a little too willing to take orders from robots

COPY
Georgia Tech researchers built the “Rescue Robot” to determine whether or not building occupants would trust a robot designed to help them evacuate a high-rise in case of fire or other emergency.   Rob Felt/Georgia Tech
Final Note

We’re a little too willing to take orders from robots

Georgia Tech researchers built the “Rescue Robot” to determine whether or not building occupants would trust a robot designed to help them evacuate a high-rise in case of fire or other emergency.   Rob Felt/Georgia Tech
Listen Now

We claim that we’re afraid of robots.

But it turns out that we’re also willing to take orders from them. Maybe, way too willing. Researchers at Georgia Tech conducted some experiments recently where they created a simulation of a fire in a building, smoke and clanging alarms. They told people to follow something called a guidance robot. Now, in the early experiments, participants watched the robot break down, lead them to the wrong room and drive around in circles. But even after they saw that happen, they still followed the robot the next time researchers ran the experiment and ignored things like emergency exit signs.

Apparently, when the time comes the robots won’t even need force to bend us at their will.