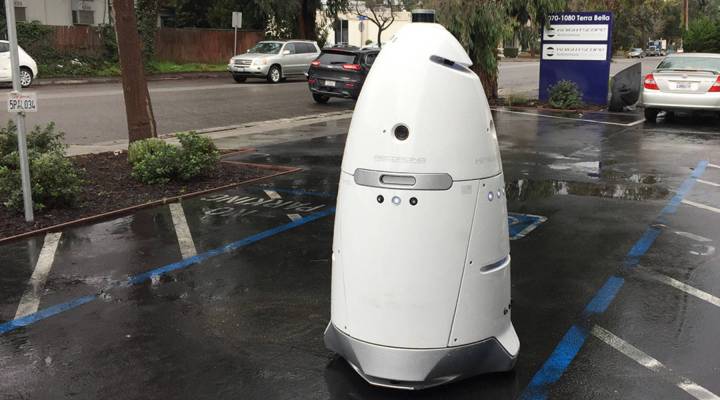 One of the big tech topics of 2017 is automation — whether and how robots can replace or augment work done by humans. One company leading the way in the security area is Knightscope. The Silicon Valley startup makes egg-shaped robots designed to roll around using sensors and software to help security officers protect against crime. Knightscope has already put its autonomous technology on patrol at Microsoft’s and Uber’s facilities.

William Santana Li, CEO of Knightscope, joins Marketplace Tech host Ben Johnson to explain how robots can assist humans, privacy issues and why he’s seeking investment funding from regular people. Below is a transcript that was edited for clarity and brevity.

Ben Johnson: So individuals or ordinary Americans can now invest in your company. Why did you decide to seek investment that way instead of just kind of continuing to scale up via the traditional venture capital route?

William Santana Li: I think this has gotten to a point where the nation needs to do something and our political leaders have been unable to come up with a solution. And this gives every American a chance to help stop terrorism, stop violence and help stop all the crime that keeps occurring every single day along our communities and streets.

Johnson: What is the advantage of having a robot patrol a property instead of human security guard?

Li: These machines can do 10 times — and one day will do 100 times more — than a human could ever possibly do. They can read 300 license plates a minute and run it against a database. They can look at a thermal signature and say, “Wow, that’s over 400 degrees. That’s probably a high risk of a fire.” Or, “Hmm, this Wi-Fi device — actually it wasn’t here yesterday and we’re at a very sensitive facility and this, you know, actually shouldn’t be here.”

Johnson: Is there such a thing as being too effective at surveillance?

Johnson:  You know a lot of science points toward the actual reduction in violence overall, globally, that we see. And I’m also cognizant of the fact that the argument that you’re making is a similar argument that a lot of people make to increase surveillance. You know I think a lot of people would push back against that and say, “Look it’s not worth it to increase this level of surveillance because it encroaches on our freedoms.” So how would you respond to that?

Li:  For us to be able come up with a new set of technologies and tools for the humans to use is, I think, important and to say that we’re not going to put up a set of defenses to better secure our country, I think, would be a very, very foolish move. So I’d like to turn the whole conversation upside down. Instead of saying it’s a privacy issue, I think more importantly would be if there’s a level of transparency, once we get all the algorithms and everything working properly, to give society a new set of tools for us to be able to literally crowdsource security.