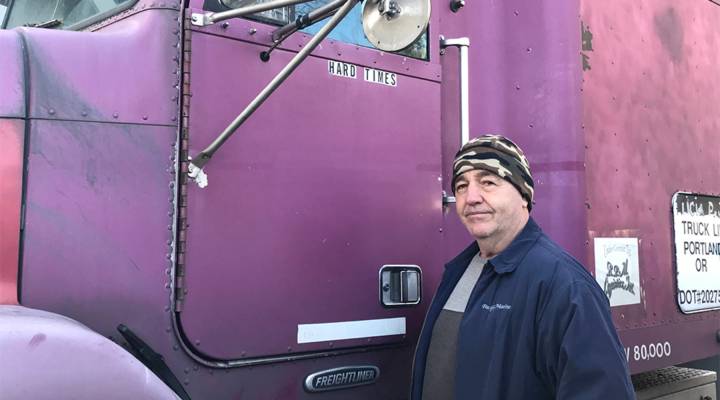 COPY
61-year-old Petru Strugari of Portland, Oregon, says driver pay is rising at trucking companies, just as costs rise for parts and maintenance to operate his own truck. Mitchell Hartman/Marketplace

With unemployment below four percent, a lot of companies are struggling to find the workers they need. And among the most desperate are trucking companies.

The American Trucking Associations has been closely tracking driver shortages. ATA chief economist Bob Costello says the problem is most acute in the long-haul trucking sector, where nearly 600,000 drivers are currently employed and 60,000 more drivers are needed. Costello warns that the shortage could grow in coming years, as baby boomers retire.

Young workers, meanwhile, are hesitant to take on the long hours, weeks away from home, solitude and other hardships of long-haul trucking. That’s even though the training period is short, and pay can range from $50,000 to $100,000, or more.

So far, Temur Macheveriani, 27, is finding the occupation to be rewarding. He drove for a trucking company for two years before buying his own truck recently. On a recent afternoon he was refueling at a truck stop on Interstate 84 east of Portland, Oregon, after delivering loads in Atlanta and Seattle.

“The trucking companies are short on drivers,” he said. “A lot of people have left — the older generation — and that’s a big plus for us. I love it. You’re basically on your own time, you’re your own boss. Nobody’s forcing you to do anything like manual labor.”

Portland-based Petru Strugari, 61, said trucking has provided a steady living for his family but it hasn’t been easy. Strugari learned truck-driving in the Romanian army, and took up commercial driving after immigrating to the U.S. in the early 1980s and being laid off from a machine shop.

“You make money because you work a lot of hours, but it’s not paid enough,” said Strugari. “The food is expensive, you sleep in the truck, you’re gone for two weeks. If you have a family, it’s tough. My wife was complaining all the time. ‘Don’t you want to come home?’ I told her they don’t bring me home. They want the truck running all the time.”

Still, Strugari keeps going back out on the road. “I’ve seen the country, I’ve seen beautiful places,” he said.

Getting young people to consider a career in trucking isn’t easy, said Leonard Stoehr, a representative for Teamsters Local 206 and a member of the city council in Springfield, Oregon. Stoehr spent twenty years on the road, and pitches truck driving at youth career fairs. But he doesn’t sugar-coat the message.

“There are certainly downsides,” he said. “You’re away from home a lot, working nights, working weekends. I don’t want them to be out there on the road realizing I sold them a bill of goods.” On the other hand, he said, “the compensation is great. If you want to just stay out on the road all the time, you can make $80,000 to $120,000 a year.”

Lately, trucking companies have been hiking wages to boost hiring and retention. “In the past eight months, we’ve invested over $30 million in annual driver pay,” said Wayne Cederholm, vice president for driver recruiting at C.R. England in Salt Lake City. “It could be a couple of hundred-plus a week, several thousand dollars more per year.” Cederholm said the company has also rearranged drivers’ schedules to give them more predictability and time off the road.

According to jobsite Glassdoor, truckers’ median base-pay increased 5.1 percent in the past year to $55,435. Trucker wages start higher, and are rising faster, than many other blue-collar occupations, such as construction, maintenance and warehouse work.

But wages need to go still higher to restore truck driving’s former economic clout and attract new drivers, according to economist Michael Belzer at Wayne State University. Belzer has been studying the trucking industry for decades and is author of the book “Sweatshops on Wheels: Winners and Losers in Trucking Deregulation.”

“Trucking began to experience a shortage of drivers in the mid-1980s,” said Belzer, “and after de-regulation, after compensation dropped by about a third.” Belzer said that if pay had kept pace with inflation since then, the typical long-haul driver would make about $120,000 a year now. “What you have is a shortage of compensation and intensification of working conditions. And the job is not attractive enough to draw people into the industry to stay.”

Costello, of the American Trucking Associations, said it’s probably true that large pay hikes could bring in new recruits and help with the driver shortage. “But is that $150,000 a year, is it $200,000 a year? That’s unrealistic. I think it’s much more complicated than that. If this was only about pay, it would be much easier to solve. If you get the drivers home more, often they’ll jump on a job, even if you pay them less.”

And pay isn’t the only obstacle to getting more people to sign up for a life on the road. “If I were just starting out today I would be in a lot of uncertainty about how stable and secure my job would be, due to the advent of autonomous vehicles,” said Stoehr.

Self-driving trucks are being developed by Daimler, Tesla and other companies. Stoehr said that, right now, there are significant logistical challenges to their widespread deployment. But many in the industry think they could eventually transform long-haul trucking.

And, said Stoehr, “I seriously doubt that freight haulers would want to pay the same wage to somebody who was just supervising and, more or less, watching the truck drive itself.”