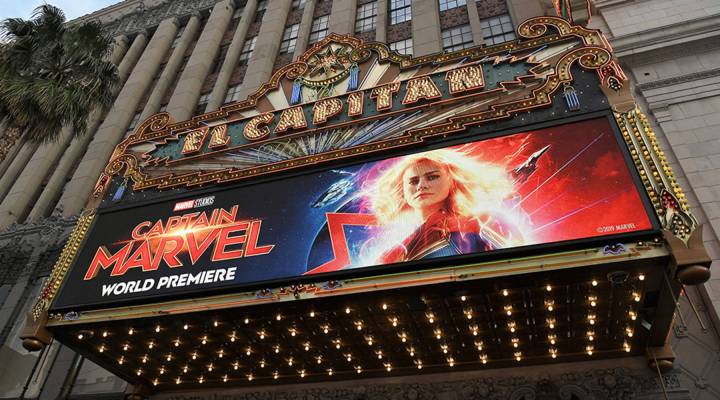 Disney and Marvel Studios released “Captain Marvel,” starring Brie Larson, on Friday, International Women’s Day. The last Marvel Comics character to star a female superhero — Twentieth Century Fox’s “Elektra” — tanked at the box office 14 year ago, but industry estimates say “Captain Marvel” is on pace to pull in between $120 million and $160 million by the end of the weekend. Marketpalce’s Andy Uhler talked to Kelly Sue DeConnick, author of the Captain Marvel comic book, about how she hopes this film will win big at the box office to show there’s a demand for female-led badassery.

Listen to the full interview with Kelly Sue DeConnick below.

The following of is an edited transcript of their conversation.

Andy Uhler: Give me a sense of why you chose this character to reinvent and develop into a comic book series.

Kelly Sue DeConnick: I wish I had a more romantic story. I don’t. I was at a point in my career when I felt like the next step for me was I needed an ongoing — in comics there are ongoings, which are sort of continuing stories, and then there are limited stories — and I had done several limited, and I needed to do an ongoing in order to take the next step up the career ladder.

And so I was looking for the character to pitch on that would be the best fit for me. And also I was looking for somebody who wasn’t currently being published, so I wouldn’t be pitching on somebody else’s job. Carol’s [Captain Marvel] solo series had ended, and I thought there had been enough time that she was due to come back. So I approached Steve Wacker  [vice president of creative and content development at Marvel], and Steve had been working on bringing her back as well, and so he’s like, “Yes, please pitch me on Carol.” So I started researching, and as it turned out, we had a lot in common, and I really liked the character and had an affinity for the character and had a take, an approach, that I thought would make her hold a solo series well. So I pitched, and here we are.

Uhler: But you’ve also said that this character, Carol Danvers, isn’t the idealized version of a superhero, right? She’s a superhero … but we see some of what makes her relatable to us on the page and on the screen.

DeConnick: Superheroes that we all know in the mainstream, I think it’s easy to understand in terms of Spiderman. Peter Parker is very much us. He has bills to pay. Sometimes he makes a bad decision. There are impossible choices he has to make. He has to be in two places at once. You know, his life is our life. And Carol is very much of that ilk. Carol is not one of those superheroes that is 100 percent aspirational, clearly perfect. She never has the Rita Hayworth moment. She never lands and then flips her hair back, and we all sparkle. You know, she lands, and she wobbles, and her hair’s in her eye, and she blows it out of the way so she doesn’t burn herself. She’s very much us. She’s doing the best she can, falling down and getting back up.

So when I was working on Carol in the comics, and I need to be very clear and say that I did not create her. She predates me. She predates my birth. What I did was reimagine her. And my goal with how I wanted to develop the character, I wanted to stay true to the things about her that I thought were at the core of her character. But I wanted to nudge her into more of a place of having a little bit of swagger, because I thought that as a pilot — you know I grew up on Air Force bases and having met my share of pilots — I know they all have a kind of twinkle in their eyes. And I needed Carol to have that. … And so I wanted to bring her back to somebody we can identify with and somebody we could root for and to do it in a way that men are allowed to do and women are seldom allowed to do.

Did I have my eye on Carol one day leading a major motion picture? Absolutely not. I wished, but I didn’t think we were going to get past six issues, to be quite frank with you. When people were upset about the costume change, I was like “Oh, pipe down, she’s going to be back in the swim suit in a year anyway.” I felt like this was a baby step. I like to think I’m an optimist, but maybe not so much as I would like to believe, because I didn’t see this coming at all. And then to be lucky enough to get to participate? This is quite literally beyond my wildest dreams.

Uhler: And when you were writing the character and then talking with the filmmakers, were you thinking about her in the context of the social environment we’re in today? I mean, was it important to you to develop a really strong female character for girls and women read about and then see on the screen?

So I unapologetically want this movie to do well financially because that will tell the world we can do this: We can have more women protagonists, we can have more women leading action films, and when more young women see that, then they see themselves as protagonists in their own stories. We’re 51 percent of culture but 16 percent of protagonists. You know, that message says you are a side character and everyone is the lead in their own story, and we need to have the opportunity to say that. So it was really, really important to me. And it’s really important to me that the film does well. I’m on pins and needles here.

Uhler: What’s been the reaction to the character?

DeConnick: The last 24 hours, my social media has been completely unmanageable … it’s been genuinely overwhelming in the best way possible. So many women, young women, old women and men, too. But the thing that’s really important to me right now is so many women saying, “I hadn’t seen that before, and I didn’t know what it was going to mean to me.”