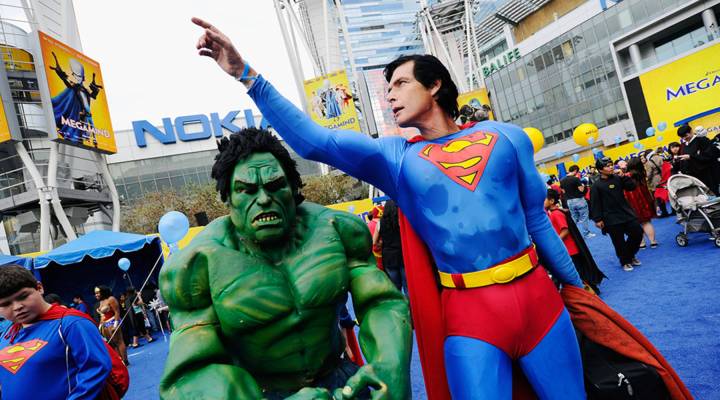 COPY
Like the Incredible Hulk (Marvel) and Superman (DC), the comic book publishers have very different personalities. DC is more "buttoned down" and Marvel is "free flowing." Kevork Djansezian/Getty Images

In the new book “Slugfest: Inside the Epic 50-Year Battle Between Marvel and DC,” journalist Reed Tucker details the long rivalry between these two comic book behemoths. Tucker talked to Marketplace host Kai Ryssdal about the companies’ early years and where the future of the comic book publishing industry will go. What follows is an edited transcript of their conversation.

Kai Ryssdal: You point out in your prologue here that it was not all that long ago that comic books in this economy were about as marginalized and irrelevant as they could be.

Reed Tucker: It’s so true, and that’s what I think is just so incredible about what’s happening now, where comic books have basically become mainstream pop culture. You know, if you think about them and even back in the ’50s, we were holding Senate hearings investigating basically the danger of reading comic books. So they sort of went underground for a while, and in the ’70s and ’80s, they had comic book stores, but they were often in sort of these grotty strip malls, and you know, they were dark, dusty places and not very welcoming. So to see comic books come out into the light, into the mainstream like this, and they’re now multibillion-dollar businesses when it comes to TV and movies, to me is kind of astounding.

Ryssdal: But also, and you make this point as well in the beginning of the book, 50, 80 years ago it was DC and Marvel. Today it’s DC and Marvel at the billion-dollar levels.

Tucker: Exactly. You know, I’m trying to think of other businesses that just had two main competitors, and really the only one I can think of off the top of my head was the cola wars. You know, you’ve got Coke and Pepsi, and they’ve been battling each other for years. But, yeah, it’s astonishing that no other company has really been able to break in.

Ryssdal: They were, in the early days, anyway, completely contrasting examples of I guess corporate culture, right? D.C. you say was more sort of buttoned down and then Marvel, once Stan Lee gets in there, is more free flowing.

Tucker: Yeah, that’s exactly right. People think of comic book industry as being this fun kind of jokey place to be, and there’s all these stories of comic book fans visiting DC in the ’60s and just being really, really let down when they got into the office, because it looked like, you know, they were selling insurance in there. You know, there are people wearing suits, there’s kind of a hushed tone, it felt very conservative. Meanwhile, Marvel, in part because they didn’t have as much success as DC had early on, and it didn’t have as much money, their offices were much more DIY. Somebody told me, one of the writers, that when he walked in there in the ’60s the only thing in there was Stan Lee and a $10 couch. So in part that has directed the culture at both of the companies.

Ryssdal: Am I being a false romantic if I lament the demise of the actual comic book in favor of what has become much more mass entertainment with these movies, or is that just the way the business has to be, man?

Tucker: You know, they have almost gone away many times over the years, even as far back as the ’70s. You know, when Warner Communications first started taking over D.C., those executives would come in, they would look at the ledgers of the comic book publishing business, and they would say, “Why are we still publishing comic books?” And the publisher would say, “Well, we’re doing it because it’s almost like a laboratory where we try out new ideas, we create new characters, and down the line, those characters are going to be very valuable.”

Ryssdal: Do you think, even though as we’ve been talking about they have become these cultural behemoths, that DC and Marvel are going to be around for a while in the comic book publishing business as opposed to the intellectual property business?

Tucker: It’s a good question. You know I asked a lot of people who work in the business and they could all envision a day where there is no more comic book publishing, that these characters are just you know sort of IP libraries that are mined for TV and movie projects going forward. I guess in our favor if you want to see comic books stay around, what I’ve been told is one of the reasons that they keep publishing them is to keep the trademarks alive for some of these more obscure characters. So I don’t think it’s going to go away, but it just depends on who’s in charge and who’s looking at the numbers, I suppose.

Ryssdal: Do you have a favorite character in comic books?

Tucker: Well, I always liked Batman growing up. Part of that was because, you know, he’s cool and he was kind of darker than some of the other DC heroes, you know, that I owned Underoos of, like Superman or Wonder Woman.

Tucker: I think it was given to me by Santa Claus one year, but I didn’t ask too many questions.

Click here to read an excerpt from the introduction of “Slugfest: Inside the Epic 50-Year Battle Between Marvel and DC.”