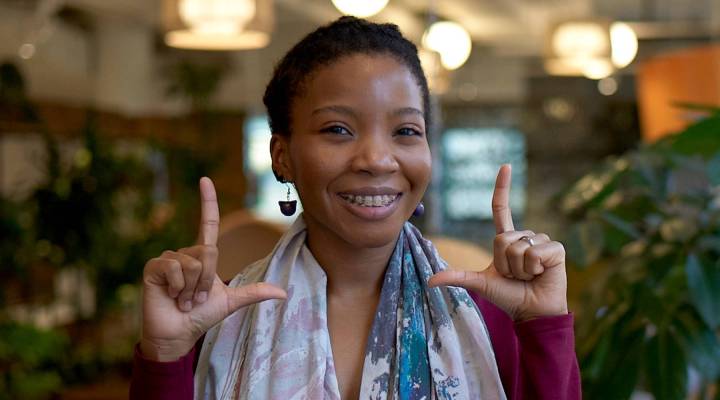 COPY
For Catt Small, creator of the game "Sweetheart," game development is about "trying to understand ways to communicate what it means to be a person to other people."  Courtesy of Catt Small
My Economy

For Catt Small, creator of the game "Sweetheart," game development is about "trying to understand ways to communicate what it means to be a person to other people."  Courtesy of Catt Small
Listen Now

According to a 2017 survey by the International Game Developers Association, women make up just over 20 percent of the workforce in the video game industry and around 30 percent are people of color. Catt Small, a product designer and technologist based in New York, hopes to change that. By day, Small works at Etsy, but in her other work life she develops games and is one of the organizers behind the Game Devs of Color Expo. Her latest game, “SweetXheart” puts players in the role of a young black woman just starting her career in the tech industry. Small talks about her latest project and the issues she faces in the game industry.

My name is Catt Small and I am a product designer as well as a creative technologist who creates video games.

I’ve always loved video games and I have very fond memories of playing as a child. But as I got older I wanted to start making my own, and my first game was actually a dress-up dolls game that I made when I was around 10 years old. And I knew that that wasn’t going to be enough for me. I really wanted to do more. So as I got older I kept experimenting, and I found myself becoming really engaged with the process of understanding how to actually turn real life events into logical sequences that people could play.

I released “SweetXheart” in January of 2019. “SweetXheart” is what people call a visual novel. The goal behind “SweetXheart” was to convey what it’s like to be someone like me in the United States, a black woman who works in technology. As you go throughout the day, Kara [the main character] has a lot of different interactions that she experiences and depending on those experiences she either feels more positively or she starts to feel really negative, and at the end of the week the hope is that you can have a positive week which requires five good days. It’s really challenging to get five positive days in a row which is honestly quite accurate for me in real life. But things have gotten better lately.

My whole concept behind game development is really trying to understand ways to communicate what it means to be a person to other people. I really aim to put people into my shoes and experiences that are familiar to me. I want to convey them to other people as well.

I’ve thought a lot about potentially being a game designer professionally, full-time. But unfortunately I think the industry is not at a point where it can support someone like me. People get laid off all the time. It is a really stressful situation to be in when you can’t find long-term full-time work but that is something I thought about a lot and I hope that one day I will actually be able to do that.

If you like the music in this edition of My Economy, check out Small’s game “SweetXheart.” The music was composed for the game by Phu Nguyen.