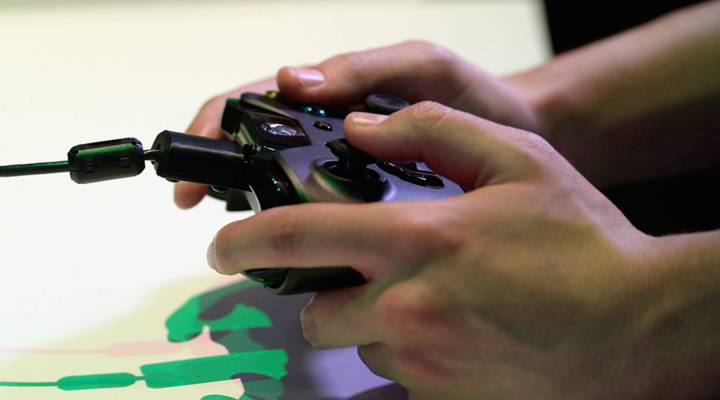 COPY
An Xbox One controller is used at the Microsoft Xbox booth during the Electronics Expo 2013 at the Los Angeles Convention Center on June 11, 2013 in Los Angeles, California.  Kevork Djansezian/Getty Images
Marketplace Tech Blogs

An Xbox One controller is used at the Microsoft Xbox booth during the Electronics Expo 2013 at the Los Angeles Convention Center on June 11, 2013 in Los Angeles, California.  Kevork Djansezian/Getty Images
Listen Now

There’s more scrutiny around violence and video games at this year’s Game Developers Conference in San Francisco. After the mass shooting at Parkland High School in Florida last month President Trump met with members of the gaming industry at the White House and suggested that violence in video games could lead to real-world violence. However, research has not found a link between the two. Marketplace Tech host Molly Wood spoke with Kate Edwards, executive director of mental health nonprofit Take This and the former director of International Game Developers Association, to find out how game developers are thinking about this in their work. The following is an edited transcript of their conversation.

Kate Edwards: When they’re going through that process and make those decisions. I think a lot of people think that they just gratuitously believe like “oh we’ll just throw in some blood there and throw in some here and, you know, kind of gross it up a bit,” and it’s like, no, that’s not really what happens. I mean it really does come down to serving the game design and the narrative. And so in some cases having more realistic violence and having more realistic acts serves the narrative of the particular world that the game creators have made, and in other cases it just doesn’t matter because there might be violent acts like killing an animal that you could feed off of, or something like that, but you’re not going to see explicit gore or anything like that because there’s no point, it’s not really what the game is about.

Molly Wood: Can you give me some examples of things that are absolutely left out? I mean I know there’s obviously ratings and there’s things like that, but can you think of anything specific that you’ve ever seen a developer say “OK, we can’t do that.”

Edwards: So for example, I worked on a lot of the Dead Rising games that have come out over the last several years. And those games, you’re committing, you know, pretty violent acts against zombies. You’re killing these zombies, these creatures that are certainly human looking. And in those particular game series, one of the features of the series is the graphic nature at which you destroy the zombies and so some of the acts that were committed, there were a couple of times where we just felt that the nature of what you’re seeing was just too much.

Wood: And how is the industry receiving this round of rhetoric and conversation from the White House and sort of renewed conversation about violence in video games?

Edwards: I think in general the industry is having another eye-rolling moment. A lot of people are like, the reactions that I hear and in a lot of developing communities both in the U.S. and in Europe in other places is kind of this like, “Really? Again? We’re still talking about this?” But there are a lot of discussions around it. There’s a lot of, I think, frustration around it. When I see the photo of like the ESA (Entertainment Software Association) and the ESRB (Entertainment Software Ratings Board) meeting with President Trump, I basically view that as a complete failure on the part of the game industry. We have lost control of the public narrative. And I’m not sure we ever really had it, to be honest. And when I see the fact that we have to keep explaining and re-explaining what we do and what our craft means and all these kind of different issues, that’s us not doing a good enough job helping reach out to the public.

Edwards: I think to me, a lot of it has to come from the developers themselves. And I often challenge them and say well, when’s the last time you actually called up your local representative and invited them to your studio and showed them how games get made and walk them through how decisions around these kind of issues get made and allow them to ask those challenging questions about “Why did you do it that way, or why does that violent act occur? And what was your thought process behind it?” I think those are really important forms of outreach to open up the black box of game development and help people understand the intent behind decisions that get made.