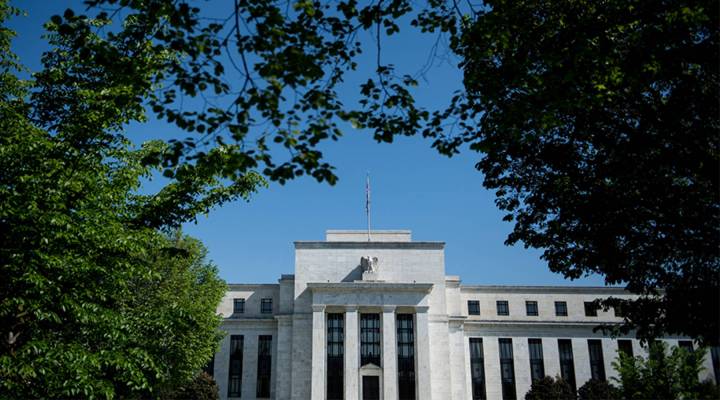 COPY
A view of the Federal Reserve in Washington, D.C. Brendan Smialowski/AFP/Getty Images

The Federal Reserve released minutes from its most recent meeting today, the one one at the end of January at which Chair Jay Powell and his colleagues made it pretty clear they were willing to stop raising interest rates for a while given some signs the economy might be slowing.

That was a big change for the Fed. So we called Jessica Rett, who teaches linguistics at UCLA, to make sure we were reading the the central bank’s signals the right way. Marketplace host Kai Ryssdal asked Rett about differences between the Federal Open Market Committee’s December postmeeting statement and the FOMC’s January postmeeting statement.

So that sounds to me like a slight weakening. “Strong” is a positive evaluative adjective that suggests that we’ve got a positive judgment about what’s happening. So if I have a student in a course and I say “that progression is strong,” then it should just go positively toward that progress. On the other hand, “solid” progression is not necessarily a positive one. It could be something I’m not particularly happy about, but at least minimally it’s consistent. So the adjectives focus on different components of the rise.

Ryssdal also asked Rett to break down changes to a sentence hinting at the Fed’s plan for interest rates. In its December statement, the Federal Reserve said that “The Committee judges that some further gradual increases in the target range for the federal funds rate will be consistent with sustained expansion of economic activity, strong labor market conditions, and inflation near the Committee’s symmetric 2 percent objective over the medium term.” In its January statement, it said, “In light of global economic and financial developments and muted inflation pressures, the Committee will be patient as it determines what future adjustments to the target range for the federal funds rate may be appropriate to support these outcomes.” Here’s what Rett said:

So that seems like some more subtle weakening in three respects. So the first one is a statement of the fact that they want some increases. But there’s three sort of hedging or weakening components of the updated version. They’re going to be “patient as they determine what future adjustments to the target range may be appropriate.” It’s sort of not going to come down in a position of whether or not there’s going to be a change and whether it will be an increase or decrease. When you put all of these things together, it sort of amounts to the difference between the sentence, “I know how much coffee Kai wants,” which is a sort of straightforward declaration of what the facts on the ground are, versus “I wonder whether Kai might want coffee,” with significantly more hedged and less informative. So they know what they’re doing over there.

In the January FOMC meeting minutes released today, the Federal Reserve explained the “strong”/”solid” change like this:

With regard to the postmeeting statement, members agreed to change the characterization of recent growth in economic activity from “strong” to “solid,” consistent with incoming information that suggested that the pace of expansion of the U.S. economy had moderated somewhat since late last year. The description of indicators of inflation expectations was revised to recognize that the downward moves in market-based measures of inflation compensation that occurred in recent months had been sustained, while also noting that survey-based measures of longer-term inflation expectations were little changed. Members also agreed to several adjustments in the description of the outlook for the economy and monetary policy. The statement language was revised to indicate that the Committee continued to view sustained expansion of economic activity, strong labor market conditions, and inflation near 2 percent as “the most likely outcomes.”

And the “some further gradual increases”/”patient as it determines” change like this:

With regard to the Committee’s postmeeting statement, participants supported a proposed change in the forward guidance language that would replace the previous guidance referring to “some further gradual increases in the target range for the federal funds rate” with an indication that, in light of “global economic and financial developments and muted inflation pressures,” the Committee would “be patient as it determines what future adjustments to the target range for the federal funds rate may be appropriate.” Participants also supported a proposal to remove from the statement the characterization of risks to the economic outlook as “roughly balanced.”

Regarding the Fed’s word choice explanation, Rett said, “I’m actually a little impressed with the minutes. It seems as though they know what they want to do and they know how to do it very subtly, which is more than I can say for a lot of us.”