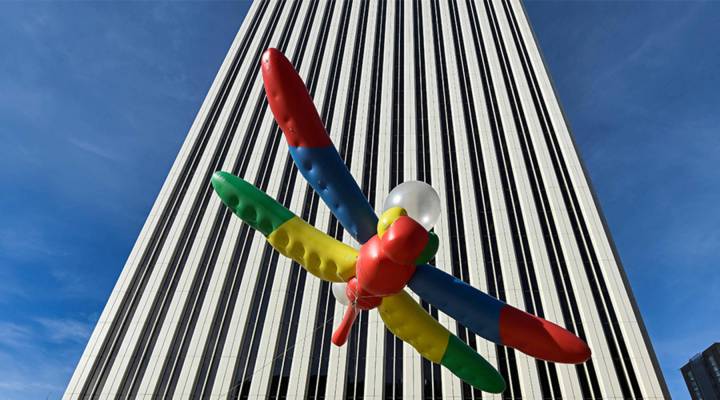 COPY
A dragonfly balloon outside Google's headquarters in Madrid is part of a protest of the company's Dragonfly project on Nov. 27, 2018. OSCAR DEL POZO/AFP/Getty Images
Marketplace Tech Blogs

A dragonfly balloon outside Google's headquarters in Madrid is part of a protest of the company's Dragonfly project on Nov. 27, 2018. OSCAR DEL POZO/AFP/Getty Images
Listen Now

This week activist shareholders in Alphabet, the parent company of Google, spoke out against development of Google’s Dragonfly. That’s the internal code name for a project reportedly working on a censored search engine for China.

We hear a lot about web censorship in China, but how does it work? What’s it like to use? Host Jed Kim talks with Marketplace correspondent Jennifer Pak about it. Now based in Shanghai, Pak has reported from inside China for years. She says censorship is getting stronger.

Jennifer Pak: It used to be that if you had steered clear of what we call the three Ts — Tiananmen, Tibet and Taiwan — talking about the sensitive topics like independence or the protests that happened in Tiananmen, then you were pretty much safe. But increasingly this list has gotten longer and longer, and it changes day by day. So in some instances, if it’s a banned search term, you will get a message that says, “Sorry, you are trying to access something that is in violation of Chinese law,” so you know that it happened. But there are other instances where you just get a limited number of search results, but you don’t even really know that it’s been censored.

Jed Kim: Do Chinese people even call it censorship? I mean, that’s what we would call it here, but when you’re living it, how do you refer to it?

Pak: I don’t think that the majority of people in China realize that what they’re getting is censored because, remember, their media here is also censored. I have to say, the internet works very fast if you are restricting yourself to just Chinese tools, searching in the Chinese language within China. The problem happens when you’re trying to access websites outside or you’re trying to access Chinese-language websites which have sensitive information, negative information about mainland China, that’s when it becomes a bit more difficult to access. But it’s not completely shut off because sometimes people will say, “Well, I can still get it.” There are tools and ways to get around it. But the purpose of censorship in China is not to stop all information from coming in, it’s just to stop the average person in China, to make it difficult enough for them to access these websites that they just eventually give up.

Kim: Does censored search have any kind of economic impact? Does it lead people to make less informed decisions about business or household finance?

Pak: Business and economic news and information used to be quite open. For business journalists, it used to be very open as well. But increasingly they’re facing a lot of pressure to not report the news because now economics has become political with the U.S. and China trade tensions.