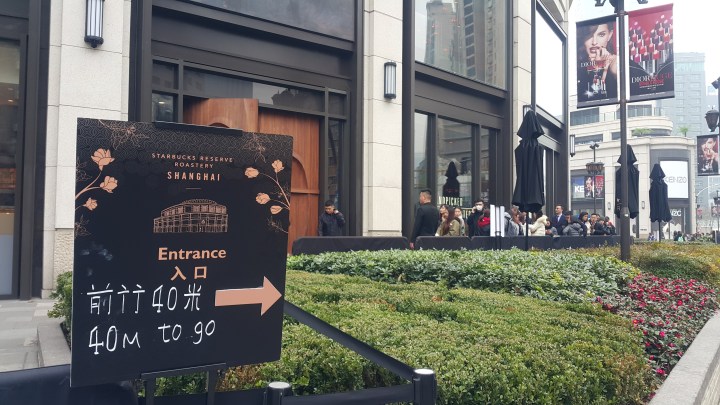 COPY
A sign directing customers to queue at the entrance of a Starbucks Roastery in Shanghai in early 2018, a few months after it opened. Jennifer Pak/Marketplace

A sign directing customers to queue at the entrance of a Starbucks Roastery in Shanghai in early 2018, a few months after it opened. Jennifer Pak/Marketplace
Listen Now

In 1985, Ker Gibbs was teaching English at a university in Beijing. The native Californian was paid a monthly salary of 300 yuan, which worked out to about a $100 at that time.

“It was too much money for me to spend,” Gibbs said.

Employers at the time provided the basics, which for him included room and board, a bicycle, and even a thick jacket for the winter.

“There was nothing to buy,” he said. “We didn’t have fancy restaurants. There were no bars. It just was not a consumer economy at all.”

However, after the Chinese government violently crushed the Tiananmen Square protests 30 years ago, the country’s leadership made some concessions to the demonstrators’ demands — mainly economic, rather than political.

“[Citizens] got a lot more lifestyle choices and they got a lot more choices of things to buy,” said Jeffrey Wasserstrom, chancellor’s professor of history at UC Irvine.

A lot of American firms have benefited greatly from China’s economic reforms.

One of the most successful is Starbucks, which it says has more outlets in Shanghai than any other city in the world: more than 600.

Buicks can be seen on the city’s streets. In the central shopping district of Nanjing West Road, Taco Bell is clustered with White Castle, KFC and Häagen-Dazs.

However, American firms face a lot of restrictions in other sectors, despite pledges from Beijing’s leadership to change these.

Marketplace looked at a few of the sectors in which U.S. and other foreign businesses are limited.

Visa, Mastercard and American Express have almost no visible presence in China.

“China promised to open up that market,” said Gibbs, who’s now president of the American Chamber of Commerce in Shanghai.

“They’re still dragging their feet in terms of granting a license for [American credit card brands] to operate here. Meanwhile, China UnionPay, which is the local equivalent of the credit cards, has 100% market share in China.“

And UnionPay is expanding to the U.S.

“I was just in Washington D.C. I saw China UnionPay in our nation’s capital in the gift shop,” he said.

It may be too late for American credit card brands since mobile payment apps AliPay and WeChat Pay are the preferred choice of payment in cities.

Since 2017, China has pledged to allow foreign investors to hold 51 percent stakes in Chinese securities, fund management, futures, and insurance companies, with the option of 100 percent control further down the road.

However, there have been complaints that license approvals in financial services have been delayed because of the tit-for-tat tariffs between the U.S. and China.

China also signaled plans to remove limits on foreign banks, though it is not clear when this might happen.

“Foreign banks combined have less than 2% market share in [China],” Gibbs said. “As the market grows that percentage is actually shrinking.”

Since 2015, U.S. poultry and eggs have been banned due to an outbreak of avian influenza.

Washington says this prohibition is no longer valid because there has not been another outbreak of the deadly strain of the virus.

At the same time, the American Chamber of Commerce China’s 2018 report notes that foreign investment in biotech crop breeding, seed production, and commercialization is prohibited.

For years, foreign brands like General Motors have only been able to manufacture and sell their cars in China if they enter into 50-50 joint ventures with domestic companies.

China has scrapped this joint venture rule in 2019 for foreign electric vehicle companies.

Tesla is currently building a factory in Shanghai.

After 2023, China says global brands can enter its market without joint ventures.

However, there are other barriers for new areas like electric car batteries. Some analysts say China uses licensing procedures to keep foreign battery manufacturers out of the market.

To offer cloud computing services, foreign firms must host the data servers in China, according to local law, which exposes the companies to security concerns.

They happen to be the sectors dominated by American firms, but they feel locked out of in the world’s second largest economy.