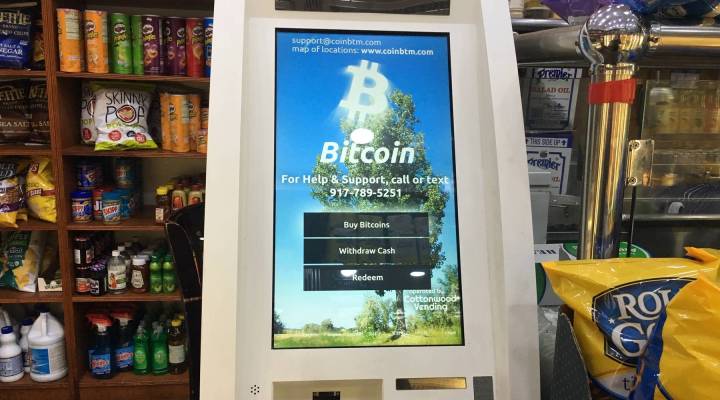 About a year ago, Matthew Boehm was visiting Vancouver, Canada, when he forgot the pin for his debit card. Strapped for cash, Boehm stumbled upon a bitcoin ATM next door to his hotel and decided to cash out some of his bitcoin.

Over the last few years, bitcoin ATMs like the one used by Boehm have begun cropping up around the globe. As of January, there were 4,274 bitcoin ATMs installed worldwide, according to Coin ATM Radar, a website that tracks bitcoin ATM installations. Such ATMs can be found in 75 countries, but more than half of them, 2,581, are installed in the U.S.

Most often bitcoin ATMs are used to buy bitcoin, even though the cryptocurrency has dropped in value over the last year. Boehm might be a rare case in that he wanted to exchange bitcoin for cash.

Even as more of them pop up in larger cities, bitcoin ATMs are still a rarity and can be a novelty for people who stumble upon them. Sometimes people use them to just “try it out.” Stores that install bitcoin ATMs are just trying to get people into the door, said David Yermack, a professor of finance and business transformation at New York University Stern School of Business.

“They don’t want people to actually spend bitcoin but you will get smarter, younger, richer people [coming in],” he explained. ”There’s a demographic of people who tend to — even if they don’t own this — they know about it. It’s a good conversation piece. It’s well understood that shops that accept bitcoin are really trying to segment the market and get a more affluent tech savvy crowd just to come in and shop but they really don’t want to spend bitcoin, they just want those people to enter the premises.”

A few years ago, while visiting Australia, Yermack himself went out of his way to visit a luxury mall where a bitcoin ATM had recently been installed.

“At the time they were quite new and novel but it had the effect of getting me to be present on the second story of a mall where I was surrounded by clothing boutiques and all kinds of other stuff and I don’t think anyone was unhappy that I was there.”

Although, not all bitcoin users fall into the desired category of affluent shoppers hoping to see what the cryptocurrency fuss is all about.

With the current rise in ransomware attacks, in which hackers lock your computer and hold it for ransom until you pay them, many victims have been turning to bitcoin ATMs in order to obtain payment for the ransom. According to Yermack, while such transactions can take hours, they are quicker than opening an account on one of the exchanges, which could take days.

Other users of bitcoin ATMs are people who use bitcoin because it hides the transaction from scrutiny. Once you are are using bitcoin, there are no bank statements or credit card bills with your name on them, listing all your bitcoin purchases. Bitcoin ATMs offer an easy way to convert cash into an anonymous form of payment. It’s something that has long attracted users to bitcoin, which has become popular among drug dealers and sex workers. Such ATMs have also become a way to launder money, according to a recent Bloomberg report. Regulators have yet to catch up with the cryptocurrency industry as it continues to evolve and grow.

And even though the value of bitcoin has dropped significantly over the last few months, the industry is still growing. In January alone, Coin ATM Radar tracked the installation of more than 130 new bitcoin ATMs.

Yermack attributes this to the “true believers” in the bitcoin technology.

“There’s a fair amount of research that suggests maybe 90 percent of the people who buy bitcoin are just speculators,” he said. The remaining bitcoin owners, according to Yermack, truly believe that cryptocurrency technology will displace much of the finance industry in the near future.

This is why many investors are still pouring money into cryptocurrency startups, hoping to get in early. However, bitcoin technology such as bitcoin ATMs still have a long way to go. Just ask Boehm, who says that for the most part his experience was “painful.”

No loitering signs are taped to a bitcoin ATM in a corner of a New York City deli.

“It took many hours to actually get my cash out of the machine,” he said. “I had to sign up for an account with the ATM using my cell number for an SMS code.”

Boehm then had to set up a Google number since his phone wasn’t working in Vancouver. That took time. Then he had to go back the machine, log in with the SMS code, tell the machine how much he wanted and initiate a transfer to the wallet on his phone. The ATM printed out a confirmation code and a website address where he could track the transaction, which has to be verified by the bitcoin network before it can be completed.

“That confirmation took many hours,” Boehm said. “Many longer than it should. Most places are good with three confirmations on bitcoin chain. [I have] no idea how many this wanted. The website for tracking the ATM transaction did not work. So I essentially had to keep going back to the machine, logging in, and checking every hour-ish. Thankfully the machine was around the corner from the office I was visiting but still an immense pain. Eventually, I got the cash. Had I remembered my bank ATM PIN, I would have had cash in about 60 second. Using this bitcoin ATM, took six-plus hours. Bitcoin ATMs have a long way to go before they can be considered mainstream.”

At a deli near Times Square, there are two signs taped on the side of the bitcoin ATM. “Do NOT Hang Around here!!” reads one. “No Loitering!” reads the other, discouraging users waiting for their transactions to be processed from waiting around.

“I would almost never recommend that anyone use bitcoin ATM if you want to own bitcoin simply because of the cost and convenience,” Yermack said. Boehm, too, noted that the ATM he used had “huge fees.”

And yet, despite the long waits and less-than-optimal experience, there might be a bitcoin ATM coming to a deli near you.