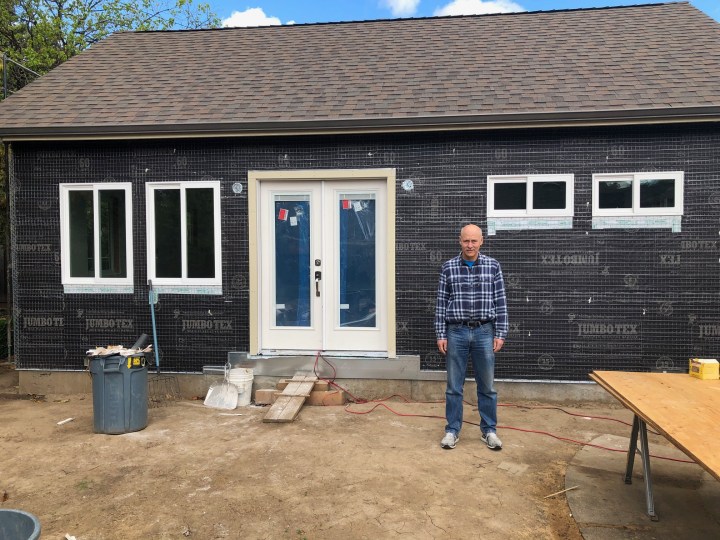 COPY
Paul Boehm stands outside the tiny home he's building in his Silicon Valley backyard. More and more seniors are turning to in-law units as a viable downsizing option as they age. Matt Levin, CALmatters

Paul Boehm stands outside the tiny home he's building in his Silicon Valley backyard. More and more seniors are turning to in-law units as a viable downsizing option as they age. Matt Levin, CALmatters
Listen Now

Paul Boehm wasn’t sure how his daughter would react to the idea of moving into her childhood backyard.

Boehm, 63, and his wife, Rosa, 60, didn’t want to travel far to visit any future grandchildren. So they approached their daughter with a proposal: to build a 538-square foot accessory dwelling unit — colloquially known as an in-law unit, granny flat or ADU — in the backyard of their home in San Jose, California.

ADUs have exploded in popularity in many West Coast cities. Los Angeles received about 67 times as many ADU applications last year as it did three years ago, according to data collected by the UC Berkeley Terner Center for Housing Innovation. San Diego, San Jose, and Portland, Oregon have also seen big upticks in applications.

“The vast majority of people that are calling us have family housing issues,” said Stan Acton, founder of Acton ADU, a company specializing in planning and building these types of units.

He estimates that 80% of his clients are interested in multigenerational housing. “Either grandparents or adult kids coming home, or you want to retire and you love your neighborhood … so you build an ADU and you rent the main house.”

To Boehm’s surprise, his daughter and son-in-law didn’t hesitate to say yes.

Being able to stay within the same support systems can be beneficial for seniors, said Blanca Castro, advocacy director for AARP California.

“Isolation is a significant public health problem and one that leads to chronic disease,” she said.

AARP California has consistently supported state legislation to make it easier to build ADUs, arguing it was a convenient mechanism to allow California homeowners to “age in place” while producing more desperately needed housing.

ADU builders say they frequently receive requests to make the small units accessible to people with disabilities — and for people anticipating mobility restrictions down the road.

That’s exactly why Paul Boehm is building his ADU bathroom with the future in mind — a higher toilet, a grab bar. Boehm is mobile now, but he knows that may not always be the case.

Cost estimates for ADUs vary widely from builder to builder and city to city, and depend a lot on local regulations and fees. One often-cited survey of ADU builders in the Pacific Northwest found an average cost of about $156,000, although California prices tend to skew higher. Acton said a higher-end one-bedroom ADU in Silicon Valley could cost upwards of $300,000.

While not cheap by any means, ADUs can be a bargain compared to buying a home in many California markets. Which is exactly why they’re so enticing to older homeowners confronting an increasingly common dilemma: stuck in an oversized empty nest with hundreds of thousands of dollars in equity, but unable or unwilling to take on the sticker shock of relocating.

Castro of AARP emphasizes that ADUs are just part of the solution for California’s senior housing crisis, and a solution primarily tailored to older homeowners or seniors with children that own property. Aging in place is a far more difficult prospect for older Californians who don’t own a home.