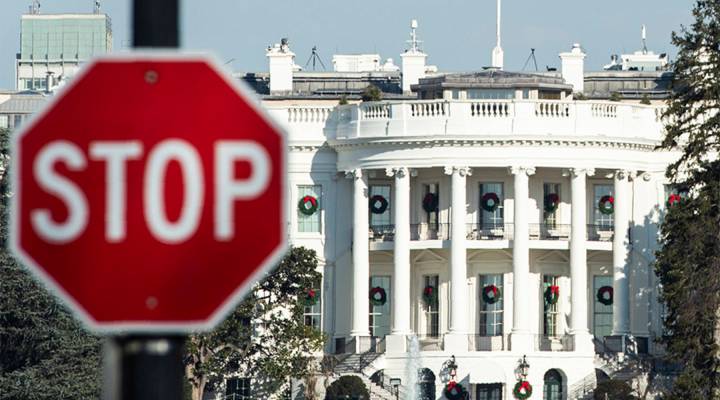 A stop sign is seen near the White House during a government shutdown in Washington, D.C., in December. Andrew Caballero-Reynolds/AFP/Getty Images
Listen Now

Roughly 800,000 federal workers, plus many contractors, are still without pay as the partial government shutdown stretches into a second week. Here are five things likely to top the economic agenda when the new Congress starts later this week.

1. Pass a spending bill and end the shutdown

There was news on Monday that Democrats plan to push legislation in the House of Representatives as soon as Thursday to end the partial shutdown, which affects the seven agencies that have not yet had an appropriations bill passed. This legislation is unlikely to include the money President Donald Trump wants for border wall funding, so it’s unlikely to pass in the Senate, which is still under GOP control.

2. No, really … figure out how to fund the government

Even if the House and Senate can pass a spending bill to end the partial shutdown, it will likely be a short-term fix to give congressional and White House negotiators time to work out a longer-term funding agreement. This will be more challenging than it was earlier in the Trump administration, since the president no longer has his party in control of both houses of Congress to help enact his agenda. The Democrats who control the House are likely to demand key concessions from the Republican-controlled Senate for any budget and spending bills to pass.

The reality of the divided government is that it will be really, really difficult to pass meaningful legislation that would affect the economy. Instead, the Republicans in the Senate and the Democrats in the House will likely dig in to what they can do independent of each other — the Senate confirming more Trump judicial nominees who will decide cases that affect business and private life for decades to come and the House energetically using its oversight powers to investigate Trump and his officials.

There does seem to be some bipartisan support for action on prescription drug prices, but it remains to be seen if there’s enough political will for members of Congress to “cross the aisle,” even on issues where people agree.

4. Deal with the national debt and budget deficit … maybe?

There will likely be lots of rhetoric about the rapidly increasing national debt and budget deficit, but, again, there’s limited political will to do much about them. The current debt limit expires in March, and there’s a September deadline for Congress to decide whether to relax budget caps. Both of those moments could be flashpoints for at least hearing about the debt and deficit.

Campaign season never ends, and many Democratic senators are already preparing for the 2020 presidential nomination fight, so every vote and debate in this session of Congress will likely carry the tinge of a presidential campaign. Trump will probably do the same, shaping policy decisions and talking points around what he thinks he needs to win in 2020.