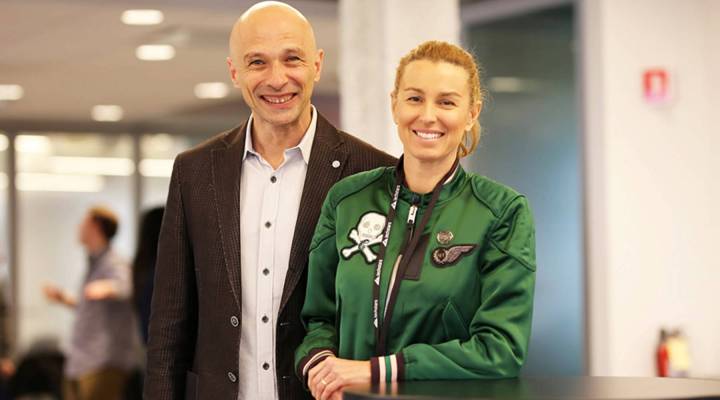 Immigrants comprise 13.2 percent of the U.S. population, yet 20.6 percent of the country’s entrepreneurs are immigrants, according to a 2016 report from the New American Economy, a bipartisan research group and advocacy organization for immigration reform.

“We are immigrants, we love immigrants, we believe immigrants make particularly good founders and we want to back them,” explained Semyon Dukach, who arrived in the U.S. as a refugee kid from the former Soviet Union through HIAS, a nonprofit that provides aid to refugees. He and his partner, Eveline Buchatskiy, who is originally from Brazil, launched One Way Ventures in Boston’s South Station neighborhood with the goal of investing exclusively in immigrant founded or co-founded startups. The fund recently closed at $28.5 million with approximately 90 investors.

There are practical benefits to being an immigrant VC: global connections and perhaps fluency in at least two languages and cultures. More nuanced positives include being “culturally fluid,” typically having a more open mind and possessing the quality known as “grit.”

Bárbara Minuzzi, co-founder of Babel Ventures, is originally from Brazil, now based in San Francisco.

For Bárbara Minuzzi, who goes by Bá, a VC investor based in San Francisco who moved to the U.S. from Brazil four years ago, it was the election of Donald Trump that fast tracked the launch of her company, Babel Ventures. In October 2016 Minuzzi moved from Miami, where she was managing the U.S. division of an investment company she co-founded in Brazil, to San Francisco so she could familiarize herself with the startup scene, not sure if she’d even stay. As she found many startup founders and C-level executives to be immigrants through her research, Trump seemed to ramp up his anti-Latin American immigrant rhetoric, which angered Minuzzi. “No, this is wrong,” Minuzzi remembers thinking, “people should know there are a lot of capable, smart people in South America.”

When President Trump was elected, “that was so insulting to me,” recalls Minuzzi. “He really made me rush things,” said Minuzzi, who created a fund in three months, “I really wanted to do things as soon as possible.”

Since there are not many Latin American women managing funds, Minuzzi thought it would be “a good use of my time.” She adds with a laugh, “to increase the data, at least.”

The election of President Trump also prioritized One Way’s mission, Dukach explained, who vividly remembers his visceral reaction to the Trump administration’s travel ban in late January of last year. “At the same time,” adds Dukach, “there is a very quantitative reason for our filter.” A recent survey from the NAE found that 100 companies on the Fortune 500 list where founded or co-founded by immigrants, from Alphabet to Tesla.

“From a pragmatic, practical, granular standpoint,” his investing partner Buchatskiy adds, being an immigrant makes it easier to know a particular foreign startup ecosystems, enabling a quick assessment of potential investments. Buchatskiy gives the example of One Way’s early investment in Brex, the startup credit card, founded by two young Brazilians now living in the Bay Area. “We understood what it meant, what kind of schools they went to,” explains Buchatskiy, who also knew of Pagar.me, the first company the young Brazilians launched and sold. “We could quickly assess that’s the kind of talent we had at hand, and that happens to us over and over again,” notes Buchatskiy who has also lived in Ukraine and Luxembourg. Brex now has a valuation of over $1 billion.

Nitin Pachisia, originally from India, is the co-founder of Unshackled Ventures in Palo Alto. Unshackled invests in immigrant founded or co-founded startups.

Pachisia notes his previous career as a consultant to multinational companies, living in many countries, helped create his analytical framework. “I kind of became immune to ethnicities, accents, colors,“ reflects Pachisia, “I don’t factor them into analyzing information.” While Pachisia says he doesn’t think he’s a better VC just because he’s an immigrant, his own experience of seeking VC funding for a previous startup while on a work visa, was the motivation behind Unshackled, as many of their founders need visa assistance.

But there are also challenges to being an immigrant VC investor, notes Pedro Sorrentino, originally from Brazil. He is the co-founder of One VC, based in San Francisco. One VC also invests in immigrant-founded startups in the U.S., as well as Latin American startups, such as the delivery/e-commerce company Rappi, based in Colombia, which has a valuation of over $1 billion.

Pedro Sorrentino is from Brazil, now based in San Francisco. He co-founded One VC which invests in immigrant founded or co-founded startups in the U.S. and startups in Latin America.

Courtesy of One VC

While “you have a more worldly view of how things work and get done,” Sorrentino said, “you start years behind.” Many immigrant would-be founders spend an enormous time on visas or work at companies waiting for a green card. Sorrentino guesses that what he’s achieved in five to seven years, a U.S.-born VC could achieve in two. “But the level of fight that we have when we approach deals,” asserts Sorrentino, “is huge.”