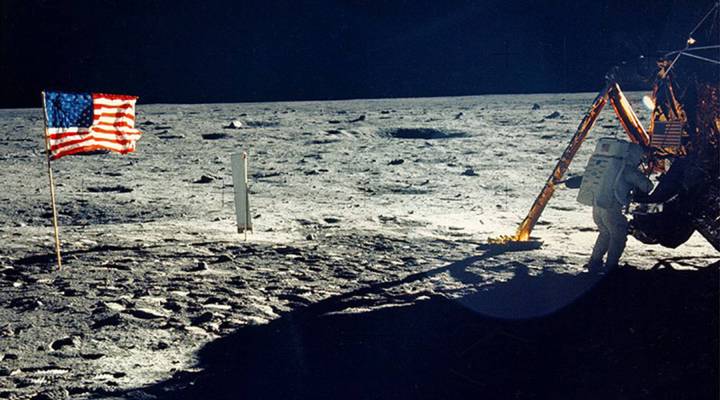 COPY
One of the few photographs of Neil Armstrong on the moon shows him working on his space craft on the lunar surface. The 30th anniversary of the Apollo 11 Moon landing mission is celebrated July 20, 1999. NASA/Newsmakers/Getty Images
Marketplace Tech Blogs

One of the few photographs of Neil Armstrong on the moon shows him working on his space craft on the lunar surface. The 30th anniversary of the Apollo 11 Moon landing mission is celebrated July 20, 1999. NASA/Newsmakers/Getty Images
Listen Now

President Trump has said repeatedly that he wants a Space Force. Congress denied the request for a new branch of the military in the latest funding bill, but some have started pricing it out, including the Center for Strategic and International Studies. Todd Harrison is director of the Aerospace Security Project there. He broke it down into three models: a Space Corps within the Air Force, Space Force Lite, and Space Force Heavy. All would mostly use existing military resources but require an additional $1.5 to $2.7 billion over five years. Harrison talks about his cost estimates with Marketplace Tech guest host Kimberly Adams. The following is an edited transcript of their conversation.

Todd Harrison: All of those things that we do today for national security, space, that authority right now is fragmented across the military. What a Space Force would do is actually combine those into one organization and one unified chain of command that’s in charge of space.

Kimberly Adams: Your estimates are much lower than what Air Force Secretary Heather Wilson laid out earlier this year. She said a Space Force would cost about $13 billion extra over five years. What accounts for that difference?

Harrison: When the Air Force put out their estimate, it’s actually a cost estimate for a Space Force and a new combatant command for space, the United States Space Command. Included in that $13 billion is a billion dollars to build a new headquarters building for Space Command, something that arguably is not needed, and it’s not related to the Space Force at all. The Air Force threw in a lot of extra things that aren’t actually related to the Space Force to get to that $13 billion number, so that’s really the big difference.

Adams: But, as “space Twitter” was very quick to point out, there were some things that you left out as well, like transition time, new satellites, new missions, new uniforms, as people seem to be very happy to discuss.

Harrison: Yes, so you could build in the cost of new uniforms. I will take that. I did not include that. In terms of new satellites, oh, well sure. That’s a different question though than creating a Space Force. If you want to expand what we’re doing in space, absolutely that will cost more. That is a separate question, though, from how we organize within the military for space.

Adams: How real is any of this? How likely are we to see a Space Force, in any capacity, anytime soon?

Harrison: You know, I think it’s a coin toss right now. Because the president is adamant in pushing for this. But there have been some members of Congress who, well before the president got onto this issue — there is a bipartisan effort in the House Armed Services Committee. But now that the House has flipped control, the Democratic leadership is sounding much more skeptical of this. And I think part of that is politics. It’s become branded as Trump’s Space Force, so that’s going to make it harder for many Democrats to get behind and support it, even though they may have supported it in the past.