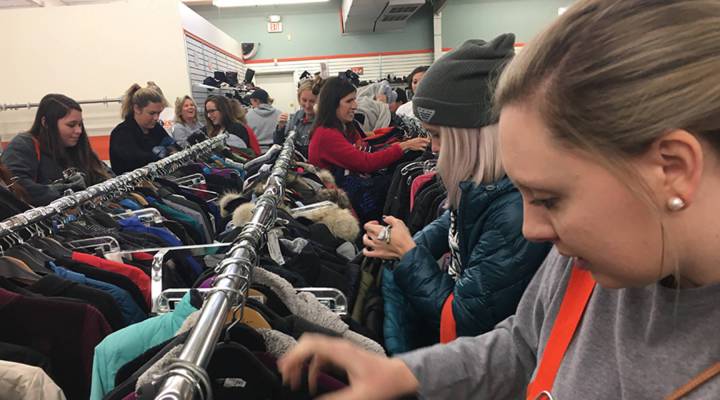 COPY
Shoppers at the Unclaimed Baggage Center shortly after doors opened at 8am.  Gigi Douban/Marketplace

Shoppers at the Unclaimed Baggage Center shortly after doors opened at 8am.  Gigi Douban/Marketplace
Listen Now

The holiday season is upon us, and that means more air travel. Maybe you can’t quite squeeze all of your stuff into a carry-on, so you pay the extra fee and check those bags. Most of the time your luggage is waiting for you at the other end. But a small percentage of bags get lost and stay lost — till they make their way to a place where the contents are sold. It’s called the Unclaimed Baggage Center.

Every year the Scottsboro, Alabama-based store holds a winter sale, which like Black Friday for many shoppers, is an event, said Brenda Cantrell, brand ambassador for the Unclaimed Baggage Center.

“We’ve been holding a year’s worth of product to roll out on this day,” Cantrell said.

Casey Anderson, a 28-year-old from Crestview, Florida, drove over 300 miles to snag a lot of snowboarding gear: two snowboards, a helmet, some goggles and boots.

The discounts were steep.

Casey Anderson of Clearwater, FL, traveled to the Unclaimed Baggage Center in search of snowboarding gear. He found some.

Anderson said it was a deal even after you factored in the cost of the Airbnb he got in Hunstville the night before so he could be one of the first ones in the door at 8 a.m. And there were dozens more like him – people even camped out in the parking lot for this special annual sale. There were t-shirt and gift card giveaways. The store showed a movie in the parking lot the night before the sale.

Jennifer Smith of Bryant, Alabama arrived at the Unclaimed Baggage Center with her mother at 6 a.m. Two hours later she was inside, piling jackets over her arm. Her strategy? “Grabbing stuff and then I’m gonna go back and go through it and put back what I don’t want,” Smith said.

Smith’s mother, Cathy Hill, stood off to the side with the shopping cart piled high with name-brand coats – North Face, Patagonia, Columbia. “I’m just doing the tag team. She gets it and I hold it,” Hill said. “I’m guarding the loot.”

Hill says she cannot believe her daughter got her out of bed at 5 a.m. for the sale for the third year in a row.

The Unclaimed Baggage Center has been in business for almost 50 years. And it offers thousands of items at 20 to 80 percent off suggested retail. Every one of those items was, at some point, in someone’s lost luggage. And people travel with weird stuff: antlers, taxidermy frogs, a sitar, a backbone (probably something a doctor or a chiropractor took to a conference.) There is even an ugly tandem Christmas sweater with two neck holes.

The Unclaimed Baggage Center has exclusive contracts with all the major U.S. airlines to buy luggage that isn’t claimed within 90 days. The company buys that luggage sight unseen. Unclaimed Baggage Center won’t disclose how much it makes from the sales. John Strong, who teaches finance at the College of William and Mary, said most retailers don’t want in on this.

“They wouldn’t know what they were buying,” he said, “so for traditional retailers, that’s not a very attractive proposition.”

A couple things have made business a little tougher for the Unclaimed Baggage Center recently. First, baggage handling fees discourage some people from checking their bags in the first place.

And second, airlines have gotten better at tracking bags, and lose fewer of them.

But Cantrell, the brand ambassador, said even if it is just a tiny percent of baggage that gets lost, millions of people fly each year. She says that’s enough to keep the Unclaimed Baggage Center in business. And whatever items it can’t sell, the company donates.