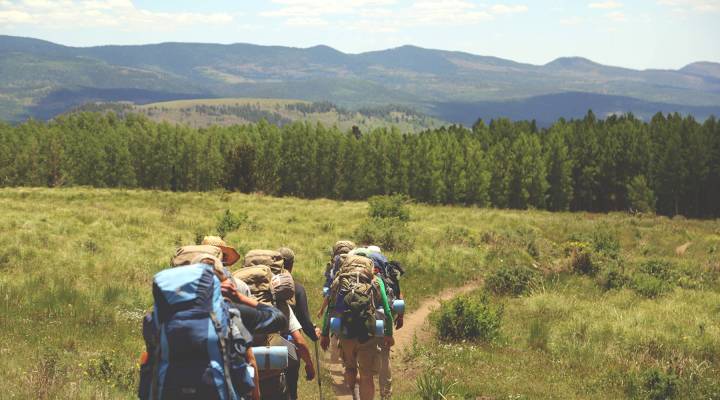 Hiking is one of the many activities included in the outdoor economy. Austin Ban

Hiking is one of the many activities included in the outdoor economy. Austin Ban

Playing in the great outdoors isn’t only beneficial for your health. Recent numbers show that it’s also a huge contributor to the U.S. economy.

In 2016 alone, it accounted for 2.2 percent ($412 billion) of gross domestic product, according to the Bureau of Economic Analysis. To give some perspective, that’s more than domestic oil and gas extraction contributed to the overall economy in 2016. The outdoor economy also grew faster in 2016 (at 1.7 percent) than the overall U.S. economy (at 1.6 percent).

These are the first measurements from the Bureau of Economic Analysis on this sector of the economy. They were researched and made public thanks to the Outdoor Recreation Jobs and Economic Impact Act, which passed in 2016.

So what exactly is the outdoor economy?

The outdoor recreation economy refers to the money that is made and spent around activities that take place in nature. Anyone who has ever gone on a ski trip knows the ins and outs of the outdoor economy well. From shopping for the appropriate gear and clothing, to renting skis and poles, to booking travel and accommodations, to buying lift tickets and maybe a lesson, all of the money spent is factored into the outdoor economy. Plus, every person that helped along the way — from the clerk who sells long underwear, to the ticket attendant who issues lift passes, to the snowcat driver who ensures the freshly fallen powder is groomed to perfection — all of them are included in the BEA’s measurements.

However, the alfresco experience doesn’t need to be as grandiose as a ski trip to be considered a part of the outdoor economy. According to the BEA, more leisurely activities are included in this sector of the economy as well, such as walking, running, birding and even geocaching.

The power of the outdoor economy

The large size of the outdoor economy has given brands more power at the negotiating table, particularly when it comes to environmental issues.

One recent example of this was when Outdoor Retailer, the largest outdoor industry trade show in North America, moved from its decades-old home in Salt Lake City to Denver at the start of 2018. Outdoor Retailer made the decision to move after several brands banded together to protest the lobbying efforts of many of Utah’s politicians who were trying to reduce the size of some of the state’s public land, including Bears Ears and Grand Staircase-Escalante national monuments. The loss of the show cost Salt Lake City at least $45 million per year, according to Salt Lake County’s tourism bureau.

Amy Roberts, the executive director of the Outdoor Industry Association, the show’s title sponsor, said finding a state that politically embraced the outdoors was crucial.

“One of the things we were looking for in the move was to find a state … that had political leadership, both Republicans and Democrats, that understand and embrace the importance of outdoor recreation,” she said.

Outdoor Retailer recently wrapped up its third and final show of the year in its new home. Marisa Nicholson, the vice president and show director for all Outdoor Retailer events, said the industry is settling in well to the Mile High City. This year was the most successful for the company by far, partially because it hosted three shows in the calendar year instead of two. The exact numbers are still being tallied, but it’s estimated that these three shows brought in around $110 million and 85,000 people to Colorado.

One of the biggest assets for the outdoor economy is public lands.

However, that infrastructure has come under threat in recent years. The Trump administration has offered more than 12.8 million acres of federally controlled oil and gas parcels for lease in the 2018 fiscal year alone, according to an analysis by The New York Times. For comparison, that’s three times the amount, on average, offered during former President Barack Obama’s second term.

Roberts said protecting public lands is a responsibility of the outdoor industry.

“The federal government owns so much land, and we definitely have a responsibility as an industry to ensure that we protect our public lands system and that we create opportunities for Americans to access that,” Roberts said.

One of the ways the outdoor industry took on that responsibility on was by working with politicians to get the Outdoor Recreation Jobs and Economic Impact Act passed in 2016, which led to the BEA tracking the numbers on the outdoor economy for the first time. That data has given the industry the ability to find common ground about public lands and other issues surrounding the great outdoors, Berejka said.

“What the economic data shows is that taxpayer investment in the outdoors generates multifold returns on investment,” he said. “One of the things that everybody benefits from by understanding the economics is that you can bridge divides. Economic data helps us talk to the most progressive Democrats, the most conservative Republicans, and we can pull them together to talk about the shared benefit to all of America from the outdoor recreation economy.”

“The ability to get outdoors is one of those activities where you can spend as little or as much time as you want,” says Marisa Nicholson of Outdoor Retailer.

The changing nature of the outdoors and the challenges ahead

The threat to public lands isn’t the only challenge the outdoor industry faces. As the country urbanizes, participating in the outdoors becomes more difficult.

“The people who love to get outdoors, they get outdoors, but as we urbanize, as screen time consumes our minds and our fingers, we’re touching the outdoors less and less,” Berejka said.

To try and remedy this problem, REI has partnered with hundreds of nonprofits across the country that are building outdoor access, maintaining trails and introducing the outdoors to people that may be unfamiliar with it, Berejka said. Other outdoor retailers like The North Face and Patagonia have similar nonprofit partnerships in place.

Roberts with the Outdoor Industry Association said it’s important to focus on close-to-home outdoor recreation venues for all Americans.

“Our overall goal would be that 10-minute walk to the park and how does outdoor recreation get incorporated into everyone’s daily lives so it can be the same as your daily commute or brushing your teeth?” she said.

The industry needs to make it clear to all Americans that getting out in nature can be simple and cost-free, Nicholson with Outdoor Retailer said.

“The ability to get outdoors is one of those activities where you can spend as little or as much time as you want,” she said. “Just going to your park or finding a place to hike, going to the beach, the mountains. There’s so much that doesn’t cost anything to do.”

Despite the strong growth of the outdoor economy in 2016, there are still many Americans who do not spend time outside. The Outdoor Industry Association’s 2018 Outdoor Participation Report shows that 49 percent of the U.S. population 6 and older participated in at least one outdoor activity in 2017. Roberts said there’s still a long way to go.

“I don’t think that in the end we’re really happy to have only half of Americans outside,” she said. “So we are really working to make sure there are more opportunities for more people to go outside.”