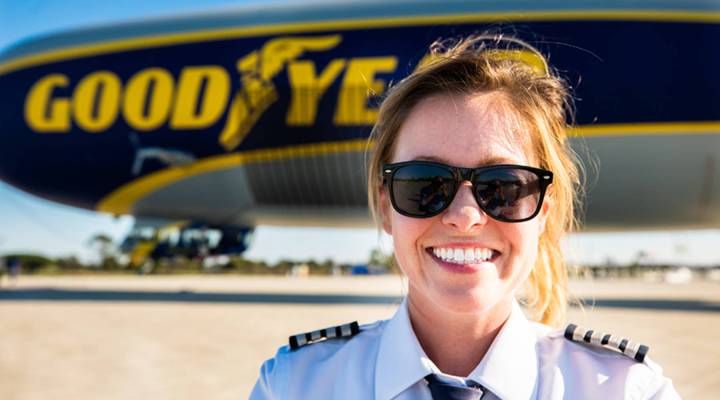 COPY
Taylor Deen is a senior pilot with Goodyear Airship Operations. Ben Hethcoat/Marketplace
How to be a...

Matthew St. John: My name is Matthew St. John. I’m the chief pilot of Wingfoot Two. Currently we’re in Carson, California — this is the Los Angeles blimp base. The airship has been stationed out here since mid-’20s.

Deen: I guess it all started when I was 13 years old and I went on a family vacation. We went down to Puerto Vallarta, Mexico. I grew up in a small town, and as I arrived there, I realized that I loved traveling, I loved the adventure, and getting back on the plane, I realized I want to be a pilot.

St. John: After I graduated from high school I went to an aerospace engineering school and I got my certifications and ratings to be a commercial pilot. I also got into sailing. I did a lot of sailing down in Florida, and it was a really good friend of mine, he’s, like, “You’re a commercial pilot and you love sailing boats. You ever thought about airships?”

Deen: Flying airplanes and flying blimps has similarities. There’s still airspace, you still have radios — things that are very similar. There’s no airship or blimps schools out there, so everybody has a different start. You can either come from the military, you can be a helicopter pilot or an airplane pilot and then transition over to airships. So when they hire you here, they train you in-house and you get all of your airship time with the company.

St. John: We do a lot of sporting events in downtown Los Angeles, with the Lakers and the Clippers and L.A. Dodgers. So when you’re down there flying around in the evening, it’s a real treat to get to see the entire city lit up like a Christmas tree at night.

“It’s a real treat to get to see the entire city lit up like a Christmas tree at night,” chief pilot Matthew St. John said.

Deen: As far as blimps go, we’re not trying to go from Los Angeles to London on a daily basis, we’re just trying to make it to a sporting event. And we want to be seen along the way, we’re always trying to advertise, so going slow and staying low is actually a benefit to us. It’s very much like a road trip.

St. John: You could have a job where you fly from city to city, much like a kind of a modern-day explorer, where you’re only at a thousand feet off the ground but you’re covering the United States and it just gives you a unique perspective. There are beautiful areas where you’re flying in really high terrain, like high, upper elevations. You might cross a certain area where it just drops off and the next thing you know, you have a huge canyon beneath you and you’re flying over the top of it — like the ultimate all-terrain vehicle. Those moments, it’s like something out of a movie.