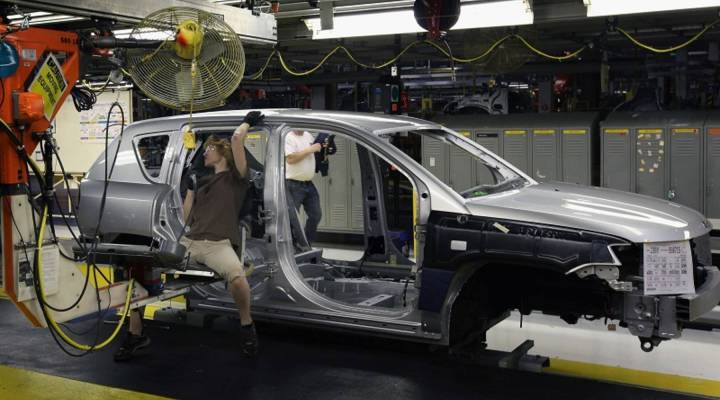 Workers build a Jeep Compass at the Fiat Chrysler assembly plant in Belvidere, Illinois, in 2012. Photo by Scott Olson/Getty Images

Let’s go back a decade to November 2008. That month, 759,000 jobs disappeared from the U.S. economy, according to the Bureau of Labor Statistics; by April 2009, Great Recession job losses had reached several million. The auto industry was tanking, with vehicle sales plummeting, assembly plants idled or operating on skeleton shifts and autoworker layoffs mounting across the Midwest.

On Nov. 19, 2008, the Big Three auto CEOs came to Congress asking for an industry bailout. GM and Chrysler were on the brink of insolvency. The CEOs warned, and prominent economists agreed, that if the two giant automakers went into bankruptcy and liquidation, it could endanger the entire supply chain and dealer-network that the rest of the auto industry — including Ford, as well as foreign transplants Nissan, Toyota, Honda, BMW and VW — depended on. The government ultimately lent GM and Chrysler $80 billion through TARP, the Troubled Asset Relief Program, to get the automakers through bankruptcy and back in business. The U.S. Treasury ultimately recovered all but about $9 billion of that taxpayer money.

So how’d the bailout turn out? For our Divided Decade series, we went to some cities that depended on the auto industry to find out.

“Toledo speaks Jeep,” says Jonathan Bridges at JobsOhio. Above, a Jeep is displayed in the lobby of a hotel in downtown Toledo.

“Toledo speaks Jeep. And the Wrangler is Toledo’s bread and butter.” That’s how JobsOhio economist Jonathan Bridges describes his native city’s reliance on Fiat Chrysler America’s hot-selling military-vehicle-turned-civilian-off-road SUV. Since emerging from bankruptcy in 2009, the company has invested $1.2 billion in retooling and automation at its massive Toledo Assembly Complex; employment has increased from 1,700 to 5,500. A second plant is going up nearby to produce a new Jeep pickup truck. Parts suppliers have moved into a redeveloped former Chrysler plant (Overland Industrial Park) that was cleaned up with federal funds after the bailout.

Jeep assembly workers Phil Reiter, 47, and John Mohr, 32, work 10-hour night shifts at the Wrangler plant, with substantial overtime available as well. They get off at 3:30 a.m. and often head for a 24-hour Big Boy restaurant across town.

“Without Jeep — and the parts suppliers, restaurants and retail it supports — Toledo would be a ghost town,” Reiter said.

Reiter and Mohr make $24 an hour. They started at $15.78 an hour under a two-tier wage system that the United Auto Workers accepted along with pay and benefit concessions in the financial crisis. They’ll reach the UAW’s top wage of $28 an hour (currently earned only by workers hired before 2007) in 2023. Under the UAW’s 2015 contracts with Fiat Chrysler, GM and Ford, the two-tier wage system phases out over eight years.

“As a whole, the pay is good,” Mohr said. “It’s still a ticket to the middle class. But expectations for a lot of people of buying a house, buying a car, getting married, having kids, putting them through college, going on vacation — no. I’m doing better than I was. But I know I could be doing better than I am if I was making full pay. The thing that’s caught me off guard is the wear and tear on the body: the schedule, the repetitive motion on the shoulders, hips, knees, back. For the pay. it’s good compared to working for $7 an hour in a kitchen. But I’m a whole lot more tired going home every day.”

The lobby at Fuyao Glass America shows off the company’s range of products for global automakers.

Dayton, Ohio, was laid low by the auto-industry crash, and it didn’t benefit much from the government bailout. The area’s flagship General Motors SUV assembly plant in nearby Moraine, Ohio, wasn’t old or inefficient, and it made vehicles that consumers wanted. At one point, the plant employed 5,000; but on Dec. 23, 2008, as the economy and auto industry were tanking, GM closed the plant and laid off its remaining 1,000 workers. Soon, nearby parts suppliers closed their doors. Driving around today, one sees the ghosts of Dayton’s industrial past: decaying factories, empty employee parking lots, once-elegant homes boarded up and abandoned.

But there is industrial life again at the old GM plant. In 2014, China-based auto glass manufacturer Fuyao took over the site and began building its biggest manufacturing facility in the U.S. The company invested $500 million and also benefited from state financial incentives and federal cleanup money for shuttered auto plants.

Fuyao Glass America President Jeff Liu said the plant now employs 2,300 workers, whose earnings start at $14.84 an hour and average $17 an hour. That’s approximately $10 an hour less than unionized GM workers earned before the plant closed in 2008. The UAW has been trying to organize the Fuyao plant, telling workers the union would improve wages and worker safety. But in a vote last year, the union lost two to one.

“The U.S. government deindustrialized for many years, and after the economic crisis, a lot of talented people moved out of state,” he said. “So currently we’re facing a labor shortage.” He said that in spite of a global slowdown in the auto industry, demand for auto glass from the plant is booming. “The [trade] conflict between China and the U.S. — because we’re local, we have a better chance of orders,” he said. That’s especially true for aftermarket replacement windshields. “Most of the glass is imported from overseas,” he said, and those imports face mounting U.S. tariffs. “The only problem is, I have 10 lines ready to open, but only eight lines can open because I don’t have enough people to run the lines.”

“We’ve turned something bad into a positive.”

HarborPark in Kenosha, Wisconsin, with its upscale condos and greenways, is on the site of Chrysler’s former lakefront assembly plant that closed in the late 1980s.

Some communities in the Upper Midwest were thrown a lifeline through the auto industry bailout — assembly and parts plants stayed open, and union autoworker jobs were saved. But Southern Wisconsin wasn’t so lucky. In the 1980s, auto plants in the region employed more than 10,000 union workers. By 2010, GM had closed its assembly plant in Janesville, laying off more than 1,000 remaining workers, and Chrysler had closed its engine plant in Kenosha, laying off 800. And that was the second major shutdown in recent decades in Kenosha.

“I was there for all the closures,” said John Fox, 58, a retired UAW worker who grew up in Kenosha in an autoworker family and is now a member of the city council. “I was hired in 1979. In 1988, they had the major closing, shutting down the lakefront assembly plant. I was laid off for 10 years. Then they called us back, and I ended up working another 10 years. They shut down [the Chrysler engine plant] on Nov. 1, 2010, and that’s the day I retired.”

Fox’s office is in City Hall, at the edge of a downtown that’s attracted significant investment. There are trendy stores, restaurants and galleries. Anchoring the revitalization is HarborPark, 69 acres of upscale condos and walkways jutting into Lake Michigan, where yachts tie up and families sit fishing. HarborPark is the site of the old Chrysler assembly plant, which dominated Kenosha’s lakefront. The federal government provided money in the 1990s for cleanup and redevelopment. The Chrysler engine plant that closed in 2010 has now been razed as well and the land prepared for redevelopment.

Kenosha has reinvented itself in recent decades as a bedroom community for Milwaukee and Chicago, attracting well-heeled commuters, visitors and retirees. Fox said new employers have come in, such as Amazon, and electronics company Foxconn is building new facilities nearby. But opportunities for locals to find well-paid blue-collar jobs are limited.

“The pay is not what I had when I was growing up or when I was a young adult,” he said. “But that’s not just happening here — it’s everywhere.” Fox said that for decades, as the local auto industry was slowly dying, “it looked pretty bleak. But Kenosha pulled out. And I think we’ve turned something bad into a positive.”

Businesses struggle in downtown Rockford even as the Fiat Chrysler plant 15 miles outside of town thrives with more than 5,000 mostly union workers on the payroll.

Rockford, Illinois, arguably got lucky in the auto industry bailout. The old factory town, which has seen its once-thriving machine tool industry all but disappear, retained a major Chrysler assembly plant in the nearby town of Belvidere. Fiat Chrysler has since invested more than $1 billion to retool — first to produce the redesigned Dodge Dart, and more recently to produce the popular Jeep Cherokee. In 2009, the workforce had fallen to 1,600. Today, it’s over 5,000, mostly represented by UAW Local 1268.

On a recent Sunday it was Comedy Night at the UAW union hall. Chicago-based comedian Marz Timms delivered jokes at turns raucous and raunchy, riffing on the economy, the rural-urban divide and working-class life.

“My GPS took me through cornfields,” Timms said, “there’s no factory out here, nobody’s gonna find me in these cornfields.” A few dozen Local 1268 members were scattered at tables in the cavernous union hall, drinking beers, shouting and clapping at the comedian. But the room was mostly empty.

The Belvidere plant draws employees from all over the surrounding area. But few come from Rockford’s low income minority neighborhoods, according to Victory Bell, 84, who in 1971 was the first African-American elected to Rockford’s city council and served for nearly 40 years. Bell said the industry bailout a decade ago did help to stabilize the local economy and housing market after the Great Recession.

“I think when you look at the bailout, it was successful to the point that a lot of people did not continue to lose their homes.” But he said that saving the local Chrysler plant hasn’t done much to counter the city’s high poverty rate and lack of work skills and job opportunity among Rockford’s low-income residents. He said the plant’s location is also an obstacle to employment: It’s about 30 minutes from downtown, surrounded by farmland next to Interstate 90. Rockford’s public bus lines don’t go there. “It would be difficult — very difficult — to work at Chrysler without owning your own vehicle, without having someone to depend on,” Bell said. “And when it comes to your job, there’s no one you can depend on.”