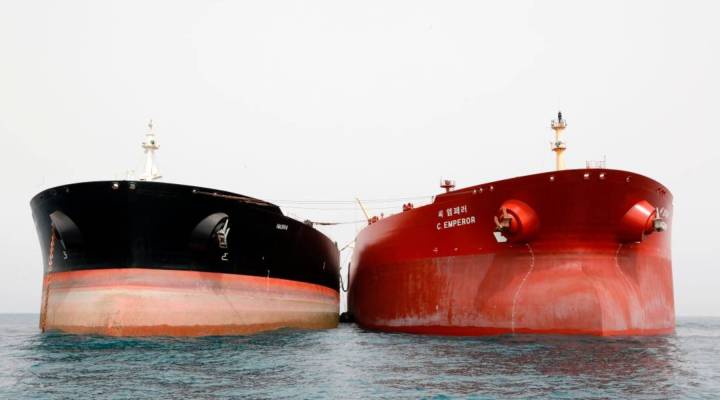 A picture taken on March 12, 2017, shows an Iranian tanker and a South Korean (R) tanker docking at the platform of the oil facility in the Khark Island, on the shore of the Gulf. ATTA KENARE/AFP/Getty Images

A picture taken on March 12, 2017, shows an Iranian tanker and a South Korean (R) tanker docking at the platform of the oil facility in the Khark Island, on the shore of the Gulf. ATTA KENARE/AFP/Getty Images

Now that American sanctions  are in place against Iran’s oil, how does the U.S. government know whether any smuggling is taking place?

A second round of sanctions went into force Nov. 5 on Iran’s oil, banking and shipping sectors. Top Iranian oil buyers — China, India, South Korea, Japan, Italy, Greece, Taiwan and Turkey — have been granted temporary waivers to continue buying it for 180 days, with the condition that they continue to cut purchases in that time.

Given that governments control oil data, how does the U.S. Treasury Department, which monitors sanctions, know if Iran or those waiver countries are breaking U.S. rules? TankerTrackers.com is one of a handful of global companies that track oil by watching the actual ships that carry and deliver it.

One of its co-founders is Samir Madani, a former tech executive based in Sweden. His company uses satellite imagery, maritime databases and most importantly their own eyes and ears to figure out what’s really going on when Iran’s ships turn off their transponders, making them more difficult to track. At least 10 Iranian tankers have done so in the weeks leading up to sanctions being imposed. In recent months, TankerTrackers.com data showed that Iran’s exports leading up to Nov. 5 were up to double the amount reported.

Anu Anand, host of Marketplace Morning Report from London spoke with Madani. Below is an edited transcript of the interview.

Samir Madani: The first priority for us is actually just to track exports out of the hotspot countries. Now that there’s so much happening, for instance, in the case of Iran, we have to do a little bit more extra. We have to verify every single vessel visually because there is no AIS [automatic identification system] transponder information coming out of the area.

Anu Anand: And that’s because they’ve started to turn them off.

Madani: That’s right. They have started to turn them off as of somewhere around August. Then it became more apparent in September, and then all of a sudden towards the second half of October is a complete blackout.

Anand: And so when you look at them visually from those satellite images, what sorts of details are you looking for?

Madani: Well, every vessel has its own unique visual attributes. You’ve got to remember that a lot of the vessels are sometimes 20 years old, so they have bleached decks, for instance. There are no two that look alike. We scrutinize over every single detail because we want to be 100 percent sure that it is that vessel that we’re looking at.

Anand: So you can see were these vessels are coming from, you can see where they’re going, but you can also tell when they are lighter, in other words, when they’ve delivered their cargo. How do you know?

Madani: When the vessel is empty, it sits higher above the surface of the water, and when it’s heavier, because it’s carrying oil, then it’s submerges anywhere up to 10 more meters. So what we look at on a day to day comparison is the width of the shadow of the vessel. So the sun is coming from a morning angle, and it beams over the vessel, and then we see the shadow in the water — if it’s wider out or closer to the vessel. And if it’s wider out, that means that the vessel is sitting higher, therefore it’s empty. And if it’s much closer, then the assumption is that it’s full.

Anand: What do you see at the moment? What has the data over the last few days and weeks and months told you?

Madani: So since the beginning of November until the sanctions started, we’ve seen a slowdown in traffic, but we also see that the vessels are sitting in place, and they are pretty much awaiting orders because of the fact that there are waivers being issued. And that means that they’ll be ready to go because right now they’re acting as floating storage. Once they’re ready to go we’ll start probably seeing their destinations and how much content they’re carrying.

Anand: And that’s important because although many countries have received these waivers, they are still meant to be reducing their import of Iranian oil.

Madani: Correct. We have seen some hard numbers as to how many barrels they’ll be taking but we also have to factor in that there’s going to be eventually something that might slip under the radar.

Anand: You helped set up this tracking company, and you could have track anything. Why oil?

Madani: Oil makes the world go round. I mean economies rise and fall, wars start and end, partnerships forge and desist because of oil — there’s so much geopolitics involved. You know, you see a lot of heated arguments between two countries or maybe they’re in conflict, but then all of a sudden you see a whole different thing, and that’s the flow of oil and petroleum products between them, as well. So for instance, Israel and Turkey — they have a diplomatic spat, but Israel is receiving crude oil from Turkish ports aboard Turkish tankers, and then Israel is sending back gasoline to Turkey. East Mediterranean, in particular, is very interesting. If you look at both Israel and Syria, which are neighboring countries in conflict, yet they both use the same method of importing oil, and that is to cloak all the imports. Both countries instruct the vessel operators to switch off their AIS transponders prior to approaching their shores, and the reason for this is because, in the case of Israel, they want to hide the fact that oil is coming from this or that country. But also the tanker operators, they don’t want to have Israel necessarily in their logbook because they have to deliver oil from or to an Arab country that might not recognize the state of Israel. And also in Israel, the import of oil and the sources of it is considered a state secret.

Anand: Now, you mentioned that one of your motivations is to track oil because it’s so fundamental to economics and politics. Is your sense that the sanctions on Iran are going to work, because they’ve already said,”We’re going to break them”?

Madani: Yeah, I mean anything is possible, in terms of breaking. It could be meant in many different ways. They could say, like, they breaking them, but then they increase just the production.

Anand: Your saying that even Iran’s statements when it comes to breaking the sanctions are just political for domestic consumption.

Madani: Oh absolutely. I mean that’s a given, but I do have evidence of them actually delivering on their word a month ago when they boosted exports, you know, while everyone else was saying that “No, their exports have dropped.”

Anand: Clearly Washington is also incredibly interested in what happens with Iran’s oil exports. Do you think they’re signed up to tracking services or can they do the job themselves?

Madani: In theory, of course they could do the tracking if they have the right personnel to work on that. The issue is that you need to have a daily update on what’s going on visually. You know, if you have bad weather then you have to have some good idea, as well, how to work around that. The U.S. military intelligence is probably very much focused on what’s going on in the north Middle East, in places like Syria and Iraq and so on. We want to make sure that they have a good check on that daily. But things like tracking vessels, it’s probably better off if they outsource that to the commercial sector, which has already good experience in doing that.