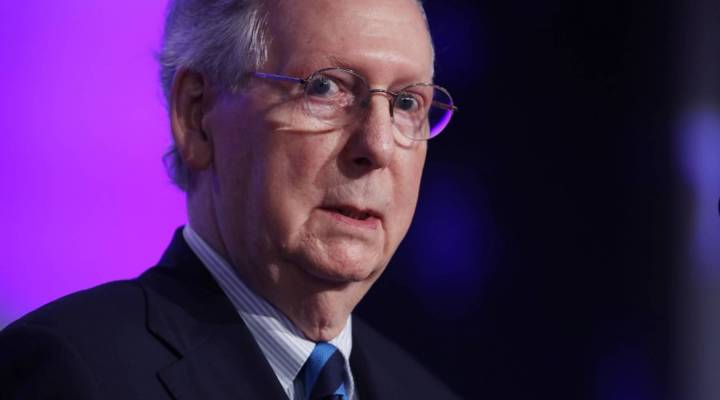 COPY
“Washington needs to find a way to spend less,” Mitch McConnell said in 2011, back when the Kentucky Republican was Senate minority leader. Above, he addresses the Value Voters Summit in Washington, D.C., in September.  Photo by Chip Somodevilla/Getty Images

“Washington needs to find a way to spend less,” Mitch McConnell said in 2011, back when the Kentucky Republican was Senate minority leader. Above, he addresses the Value Voters Summit in Washington, D.C., in September.  Photo by Chip Somodevilla/Getty Images
Listen Now

Here’s how much politicians think we care about the budget deficit: Of the more than 1 million campaign ads that aired in September and October, only about 15 percent mentioned the budget, much less the deficit. But a Politico survey of registered voters taken right before the election found that nearly half thought the deficit should be a priority for Congress.

Good thing, because we’re going to start hearing a lot of talk like this statement from Senate Minority Leader Chuck Schumer back in February: “They just voted — and cheered — a bill that would add $1.5 trillion to the deficit.” Schumer was pointing the finger at what he considered reckless spending by Republicans.

In 2011, when the Democrats were in the White House and Kentucky Republican Mitch McConnell was Senate minority leader, McConnell said this: “Washington needs to find a way to spend less.”

This is how it works on Capitol Hill — lawmakers are most concerned about the deficit when the other party is doing the spending.

“There’s tons of hypocrisy on both sides,” said Jeffrey Wright, an analyst with the Eurasia Group. Wright said both parties know the cuts they’re calling for won’t happen. Yet, “They can sort of telegraph things that they believe without having to really back it up,” he said.

And no one expects them to, because “the deficit is most often used as a hammer to smack the other party with,” according to Wright.

That hammer could get a lot of use come January when Democrats take over the House of Representatives, the clock officially begins ticking on the 2020 presidential race and the Congressional Budget Office drops a bomb with deficit projections for the next 10 years. The CBO pegs next year’s deficit at almost a trillion dollars.

Stefanie Miller of Height Capital Markets said the Republicans will pound away on reducing spending.

“So cuts to Medicare, Medicaid or Social Security,” she explained, adding that Democrats will claim there’s a better way to shrink the deficit. “Increases to the corporate tax rate that passed as part of tax reform,” she said.

It’s still going to be a lot of talk — the kind of talk that Washington’s professional problem solvers live for. D.C.’s stacked with nonprofits and think tanks devoted to slashing the deficit.

“What we hope to do as an organization is sort of leverage the fact that we have a problem and make sure that folks understand that,” said Marc Goldwein, senior vice president and senior policy director at the Committee for a Responsible Federal Budget.

Goldwein will accomplish that by traveling the country, telling people they have a problem and that they should make sure they are “letting their politicians know that they want solutions to the debt.”

Goldwein’s hoping to increase his own influence on Capitol Hill by helping lawmakers arrive at some of those solutions. Lots of people have used the deficit to leverage themselves. In 1986, a guy named Newt Gingrich got his 15 minutes of fame by making speech after speech on the deficit on a nearly empty House floor, all of it carried live by C-SPAN.

Actually, it appears we can.