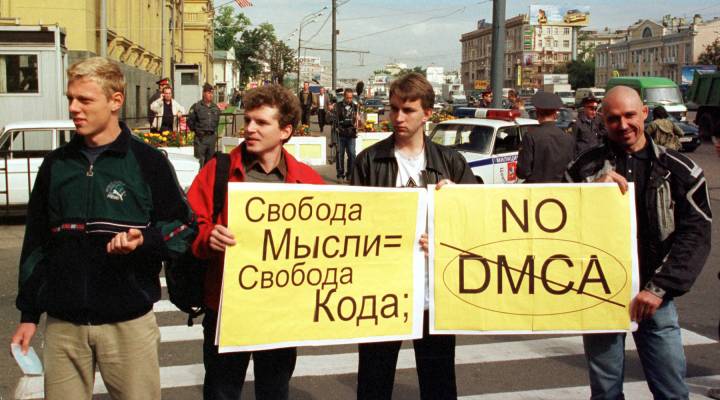 You know those music videos you love on YouTube and the memes you love to laugh at? Well, proposed digital copyright laws in Europe and other countries kind of want to make those a little less common. It’s a 20-year-old copyright law here in the U.S. called the Digital Millennium Copyright Act, or DMCA that’s behind the proposed changes.

Cory Doctorow is a writer and activist with the Electronic Frontier Foundation. He calls the DMCA a “big gnarly hairball of a law.”

He and the EFF have been talking about and litigating over the unintended consequences of the DMCA for almost 20 years now. The law was written at a time when it was newly possible to rip CDs and DVDs and put them online. And this big copyright law, the DMCA, was designed to protect companies and artists from having their work stolen and disseminated all over the internet.

But almost from the beginning, critics said the scope of the law was too broad. Doctorow points in particular to one section that covers the circumvention of tools that are designed to protect copyright.

“The idea here was that if you like made a DVD player and you wanted to control whether DVDs bought in another country could play on it, you could make a little like code [to] check to see whether the DVD was bought in the same place as the DVD player,” Doctorow said. “And if not you could refuse to play it.”

The DMCA made it illegal to tamper with things like that little code. It basically made it illegal to break any copyright locks in any product. And that is why you weren’t allowed to open up your smartphone or your tractor to fix it, which we talked about earlier this week.

There is a provision in the law for a review, every three years, to consider exemptions. One of those reviews just happened. It gives you more rights to fix your smartphone and your tractor. And back in 2015, the Library of Congress did grant a limited exemption to protect researchers who were trying to find out if voting machines or other electronic systems had security flaws, as long as they were acting in good faith.

But there was a large catch. The researchers can break through digital rights management, DRM, to find out if, for example, a voting machine has a security problem. But if they describe the tools they used to find the flaws, they could get a fine or even go to jail, which means nobody else can verify the research.

“The DMCA should have been phrased in the most common sense way imaginable,” Doctorow said. “Which is to say, if you break DRM to infringe copyright you’re breaking the rules and if you’re breaking DRM and you’re not infringing copyright, you’re allowed to do it.

Refining the DMCA has been a long process, and it’s not just researchers and academics. In 2016, major music industry organizations said another provision of the copyright law was making it too easy for sites like YouTube to keep hosting copyrighted music. And they wanted reforms, too. Kind of ironic since the music industry pushed hard for the original law.