If you’ve reached a certain age in life, you probably don’t like to think of yourself as old. You’ve got a lot of company. People 50 and over are 40 percent of the U.S. population and growing. Advertisers are clueing in to the idea that silver can mean gold — if they get the message right.

For decades, 59-year old photographer David Harry Stewart has made a living taking pictures for glossy magazines and national brands. A few years back, he started to notice that the ad people commissioning his work were half his age.

“What they’re going to do is market to the people they know best. Themselves,” Stewart said during a photo shoot at his loft in downtown Los Angeles.

Stewart asked why he wasn’t taking pictures of people who looked like him.

“They were like, ‘Oh, old people?'” he said. “‘We don’t care about old people.’ There’s this whole group that gets forgotten. Late forties to pre-elderly — that’s a big market.”

Bay area ad strategist Mary Furlong consults with brands on the purchasing power of older adults — and the right way to approach them.

“If you’re in the car industry, you should be looking at the kind of woman who wants to upgrade to a luxury car with great sensors, so she can continue to drive,” Furlong said. “If you’re in travel, you better be aware that they’re going to take six or seven trips a year.”

Pushing nothing but fear and pharmaceuticals to older consumers in ads is a big mistake, Furlong said.

He’s created a kind of “Vogue” for older people, which he calls “Ageist.”

“We’re saying this exists,” he said. ‘These people are living in a very different way than their parents were.”

Mark Gold, 58, said he likes how Ageist shows people his age in something than other than ads for hearing aids.

“He’s pushing back on the idea that we have to look and feel and act like we’re not young or youthful,” Gold said.

Ironically, Stewart says, a quarter of his subscribers are under 30.

They tell him they hope to look like the people he profiles some day. 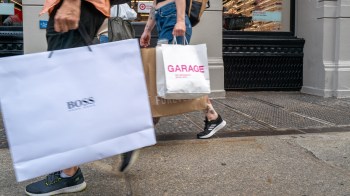