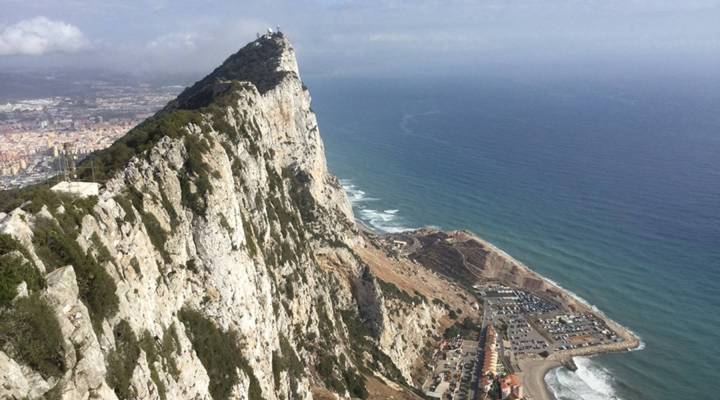 COPY
The Rock of Gibraltar.  Courtesy of Mimisse Beard
Brexit

The Rock of Gibraltar.  Courtesy of Mimisse Beard
Listen Now

Every week, a small group of men dressed in the scarlet uniform of 18th century British soldiers, march to the accompaniment of fife and drum in Main Street, Gibraltar. Yet these redcoats are not the villains of this historical reconstruction; they’re the heroes. This display revels in Britain’s capture of the Rock from Spain  and celebrates the beginning of British colonial rule of Gibraltar.

In his office in the center of town, leading Gibraltarian lawyer Christian Hernandez explained this apparent anomaly.

“We’ve been British since 1704 and we’re proud of it. We’ve been British longer than the Americans have been American. And longer even than Gibraltar has been Spanish,” he said. “We have grown up with British traditions. It’s who we are and that explains why we have always resisted Spanish attempts to take back the Rock.”

More recent enthusiasm for British sovereignty is also due to economics. Under Britain’s distant and light-touch rule, the self-governing Rock with a population of around 34,000 has turned itself into one of the world’s most prosperous places. Gibraltar’s ultra-low corporate tax rate of 10 percent and flexible regulation have been a magnet for business: 60 big insurance companies have set up operations there and 60 percent of all legitimate global online gambling is handled through the territory. In addition, because of its historical curiosity and thanks to its most dominant feature — the 1400 feet high limestone rock — Gibraltar has developed a major tourist industry too.

All this affluence has endeared the people of Gibraltar to the constitutional status quo.

”I think it does have a lot to do with life being good on the Rock,” local journalist Jonathan Scott told Marketplace. “We have a lot more spending power than our colleagues and friends just kilometers away in Spain. That is part of Gibraltar’s identity in 2018. I think for this reason people don’t see the need for change.”

“The big fear is that the border may be closed by the Spanish state with the agreement of the European Union,” Edward Macquisten of the Gibraltar Chamber of Commerce pointed out.  Britain’s exit from the EU could embolden Spain to reassert its ancient claim and put pressure on the Rock by closing or restricting a border that is vital to the territory’s economy.

“Most of our tourists, 8 or 9 million people who come to visit Gibraltar every year, cross the land frontier from Spain to get in here. 40 percent of our workforce cross that frontier every day to come to work and then go back across in the evening. We import pretty much everything and most of that comes through the frontier,” Macquisten said.

There’s just as much worry about Brexit on the other side of that frontier, in the Spanish town of La Línea. Juan José Uceda helps run an organization there representing many of the 13,000 people who live in Spain but earn their living in Gibraltar. Uceda said the impoverished town’s economy is utterly dependent on the Rock.

“Gibraltar is as important as life itself,” said Juan José Uceda, who runs an organization representing Spanish workers in Gibraltar.

“Gibraltar is as important as life itself,” he said. “If La Línea were a table, two of the legs would be Gibraltar. If those two legs break, for Brexit or whatever, the table, La Línea, will collapse. We really need Gibraltar.”

The vast majority of Spaniards want to recover the territory but Uceda is happy for it to remain British. And so, it seems, are many of the people he represents, the Spanish workers in Gibraltar.

Imane Belghiti from Malaga works as a marketing manager on the Rock.

“No, no , no, no. I don’t think Gibraltar belongs to Spain. It is fine as it is. If the Spanish government got this place … I don’t want to think about it … they would ruin this place. They would ruin it. Definitely!” she said.

Spain might struggle to maintain Gibraltar’s low tax rate and business friendly regulation since other Spanish cities might clamor for the same treatment. So, in spite of the shock of the Brexit vote, most Gibraltarians and the non-resident workers, still seem committed to British rule.

“For Gibraltar, what everyone wanted was to be in Europe with the U.K.,” said Kevin Jones, who runs a Toyota wholesaling company on the Rock.” But it looks as if we’re going to be outside the EU but still with the U.K.”

Other business people were upbeat about the future.

“Gib is a great place to do business” said Nigel Birrell, CEO of Lottoland, an online gaming company. “Great infrastructure, U.K. law, good tax rates. I don’t think Brexit should trouble us too much at all.”

And Nick Cowan, boss of the new Gibraltar Stock Exchange was even more buoyant. “Even if there’s a hard Brexit, this territory could benefit as an easy route into the U.K. for businesses in the European Union. We’re growing fast and now feel more optimistic than at any time since the referendum in 2016. We expect some great years ahead,” Cowan said.

Monkeys from the Rock of Gibraltar.

The Rock remains resilient and hopeful. After three centuries of disputed sovereignty and numerous assaults, the territory is confident that it will weather the Brexit storm and retain British sovereignty. The omens emerging from the territory’s longest-standing residents, a colony of Barbary apes, are good. These are the only wild monkeys left in Europe and they are still clinging tenaciously to the Rock. Legend has it that as long as they remain, British rule over the Rock will continue — and the apes have been breeding like crazy.