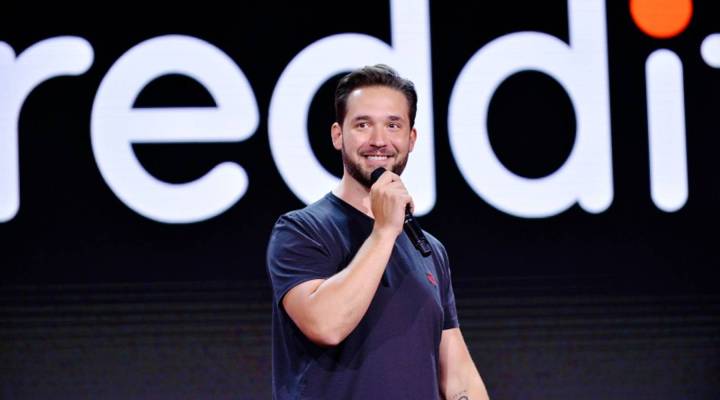 Reddit is one of the most visited websites on the internet. But it gets considerably less attention in the national conversation about tech giants and social media. If you’ve never heard of Reddit, it’s a site where anonymous users can post links, whose popularity is determined by other users voting those links up or down. It gets 20 billion page views every month, and one-third of Americans log on every month, according to Christine Lagorio-Chafkin, whose new book is called “We Are the Nerds: The Birth and Tumultuous Life of Reddit, the Internet’s Culture Laboratory,” and explores the history and impact of Reddit. She discussed the book with Marketplace host Kai Ryssdal. The following is an edited transcript of their conversation.

Kai Ryssdal: Why isn’t Reddit in the conversation? Why, when big tech companies go to Capitol Hill, it’s Google and Facebook and Twitter and not, say, Alexis Ohanian and Steve Huffman, the two co-founders of this company?

Christine Lagorio-Chafkin: The thing is … they, you know, I don’t think they understand Reddit, same as most Americans. I think that one reason for that is it’s easy to understand the internet and all the little parts of it — even if you’re not an avid user of certain sites — if you can see the flow of money, if you can see the ads being bought. Also, money is an easy way to regulate things that are going on online. There’s a huge question as to what the power of government is to kind of regulate these little, like, random person-to-person conversations that happen online. If there’s not the money to look at and follow and regulate, what’s really the point?

Ryssdal: Well, along those lines, actually, then, this is going to sound like a naive question, but I’m just going to throw it out there.

Ryssdal: Well, is there a way for us to understand why Reddit matters?

Lagorio-Chafkin: Reddit has a little bit of an anarchist spirit. It always has, it’s always sort of been thinking about itself as freedom from the press. Not having an editor determine what bubbles to the top of a home page or any given sub-Reddit, but having actual just humans vote on what they like and see that stuff soar to the top of its page. And that’s why Reddit is an incredible, incredible virality engine of the internet. You know, any meme you’ve ever seen elsewhere probably was germinated or spread on Reddit.

The cover of Christine Lagorio-Chafkin’s “We are the Nerds.”

Courtesy of the Hachette Book Group

Ryssdal: It sounds like you’re a fan even though there are many dark corners of this website.

Lagorio-Chafkin: I don’t know if I’d call myself a fan. I’m an obsessive lurker. I would say [that] is the technical term for my behavior on Reddit. As a journalist, you know, I’ve been looking at the company for about eight years now and have just been fascinated to see it grow. It’s now a company of more than 400 employees in San Francisco and four other cities. It’s gone through, you know, four CEOs, including Ellen Pao, who is kind of a feminist hero of Silicon Valley, who got basically harassed out of her role as CEO by this community and —

Ryssdal: So stop right there. So what does it say about this community, right, that a female CEO with bonafide tech chops gets harassed out of her job by members of the community? Hello?

Lagorio-Chafkin: I mean, it shows the insane power of social networks and also kind of the fallibility of them, right? If Reddit’s community can revolt against itself, essentially, and almost snuff out its own site … I mean, that’s why I think you see some fear in Mark Zuckerberg’s eyes when he’s testifying before Congress, right?

Ryssdal: Well, except for the fact that Zuckerberg owns controlling shares in that company so, you know, he can do almost whatever he wants.

Lagorio-Chafkin: Sure, sure, there’s that. As Reddit grows and is now operating as a Silicon Valley company, you know, funded by venture capital, its original creator — the man who hand-coded together the site, Steve Huffman — has come back as CEO. So this is also a story of watching his opinion on this noxious content evolve. You saw him ban a lot of behavior related to the “alt-right” and most recently take down a few conspiracy theories. That’s fascinating to see as we watch the other social sites — you know, Twitter and Facebook and others — grapple with this same sort of thing — to watch Reddit’s more, sort of decisive, in certain instances, stance on the matter.

Ryssdal: Do you think that, with all that’s going on in social media, right, with the issues Facebook is having and Twitter being the sometimes cesspool that it is, do you think Reddit is sitting there quietly, right, kind of out of the spotlight, listening and learning and taking its lessons?

Lagorio-Chafkin: Yeah, Reddit’s been undergoing a transformation over the past year. It completely redesigned its website. It used to look like, you know, dystopian Craigslist. I guess there was a quote in Bloomberg Businessweek that said that Reddit had all the aesthetic seduction of a phonebook, which was true for a full decade. Now Reddit has redesigned. It’s kind of brighter and shinier, it’s trying to keep its, you know, anarchist spirit to some extent, but also allow people to actually have avatars and usernames and profile pages, which is super foreign to most Redditors, who would prefer to stay anonymous. They’re trying to open it up for brands and open it up for, kind of, celebrities to post and —

Ryssdal: Are they really?

Ryssdal: Why would you open it up to brands and celebrities? I mean, look at Twitter and Facebook …

Lagorio-Chafkin: Why on earth would you?

Lagorio-Chafkin: Yeah, I mean, someone’s got to make some money, I think.

Ryssdal: (laughs) Somebody does.