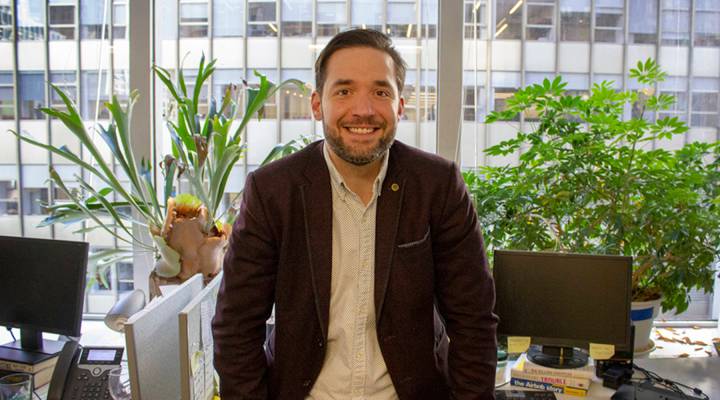 COPY
"I think that now is a better time than it's ever been if you have a hobby, if you have a passion, and you're building a following on Instagram ... to potentially turn into something that could be a real business," Alexis Ohanian says. Peter Balonon-Rosen/Marketplace

"I think that now is a better time than it's ever been if you have a hobby, if you have a passion, and you're building a following on Instagram ... to potentially turn into something that could be a real business," Alexis Ohanian says. Peter Balonon-Rosen/Marketplace
Listen Now

Alexis Ohanian has done a lot in his 35 years. He co-founded — and sold — Reddit, the monstrously successful internet company. He made some pretty successful early stage investments with the venture capital firm he co-founded, Initialized Capital. And now he’s gotten into podcasting, too, with a show sponsored by the financial services company Synchrony. The following is an edited transcript of Ohanian’s conversation with Marketplace host Kai Ryssdal.

Kai Ryssdal: So, you did a whole bunch of stuff before you became a venture capitalist, right? Most notably, Reddit, and I want to know, just as a place to start, why did you want to do venture capital after having been a successful entrepreneur?

Alexis Ohanian: You know, when it got right down to it, I was thrilled and extremely proud of all the work that we’ve done in the last three years to really turn around Reddit and put it on a great course. But at the start of this year, the company had 400 employees and the daily life of growing a company from 400 to thousands is a very different from when you’re starting out. And one of the things that I missed the most was being able to work with founders and work with ideas from the earliest days from when no one believes in you, you have zero customers, zero product and just going from zero to one. And doing early stage investing with Initialized [Capital] was a way to basically have that back in my life without having to found even more companies.

Ryssdal: You did an event at Wired a month or two ago, talking about founders and unintended consequences and how sometimes things don’t necessarily work out the way founders think they will and, you know, let’s look at Reddit and some of the less savory aspects of what’s happened on that site. Facebook certainly has had its ups and downs, Twitter as well. You know, some of the high-profile things. How aware do you think founders are now, especially in the tech space where founders, there is a cult of adoration, have they become more self-aware, do you think?

Ohanian: I’ve seen this. I really have. And I, I really believe that they’ve learned the lessons from those of us who have been in the game now for over a decade. The founders we get to meet with now are far more self-aware than I know I was 13 years ago. And you know, when we were starting out, the idea of having a platform that could one day reach billions of people or even hundreds of millions of people seemed kind of absurd, it really did. I mean, when we were starting Reddit, we just wanted to not fail. This new generation of founders who have grown up on our platforms really kind of take this scale for granted. They start out as founders with a goalpost that is a billion users. And so they work backwards from that thinking, “OK what are the repercussions of what I’m building, what are the effects going to be?”

Ryssdal: Is that realistic? I mean, that’s craziness! You set out to get a billion users? That’s bananas. And also, the fact that Reddit was only 13 years ago. I mean, God.

Ohanian: I’m feeling very dated now. Yeah. It was 13 years ago. I meet precocious 22-year-olds today who would run circles around me and Steve 13 years ago —

Ohanian: — my co-founder, and I think there’s also just a more of a wokeness to these founders. You know, we’ve heard firsthand stories from founders who told us they went into other venture firms and they’ve walked out of the room because the VC firms they were meeting with didn’t have a single woman partner in the room. And I think that’s just one more signal that founders are more aware than we ever were.

Ryssdal: How many women do you have at Initialized [Capital]?

Ohanian: So about 40 percent of our team at Initialized, and that includes partners, are women. And I mean, we still, believe me, we still have a lot of work to do. Broadly as an industry, there’s still a lot more work to be done.

Ryssdal: You, because everybody’s doing a podcast these days —

Ryssdal: That’s right, audio is where it’s at. I want you to tell me why you decided to do this podcast, “Business Schooled” it’s called. And I want to preface this by saying, you’re running a VC thing, you are not formally involved in Reddit, but I’m sure Steve Huffman calls you from time to time —

Ryssdal: That’s right. You have a new-ish baby, your wife [Serena Williams] has a very high-powered job —

Ryssdal: She is busy. So why do this?

Ohanian: You know, the folks at Synchrony actually had the concept, and I said, “Sure.” I have a voice and I really believe that so many of the lessons that we talk about and get headlines for as these “millennial startup founders” are really just the same playbook that old school businesses have been succeeding with for years. But it was a lot of fun to do, and you know, who knows, maybe there’s more podcasting in my future.

Ryssdal: So last thing and then I’ll let you go, we had you on five years ago actually — we looked it up, five years ago — about I think it was your book probably.

Ryssdal: And I asked you, in essence, whether anybody could make it on the internet as an entrepreneur and whether, you know, that was a sustainable sort of proposition and can everybody do it. You said yes at the time, and I wonder if you still believe that.

Ohanian: I do. I was holding my breath hoping that I still agreed with myself five years later. But yes, I do believe that. I continue to be heartened by the stories that I find and that I encounter. I’ll get cold emails from folks who read my book or saw me speak of their college years ago and who got into programming, or you know, started a side hustle that has turned into a full-time job they do from their homes. I think that now is a better time than it’s ever been if you have a hobby, if you have a passion, and you’re building a following on Instagram, there has never been a better time to do that and for that to potentially turn into something that could be a real business.