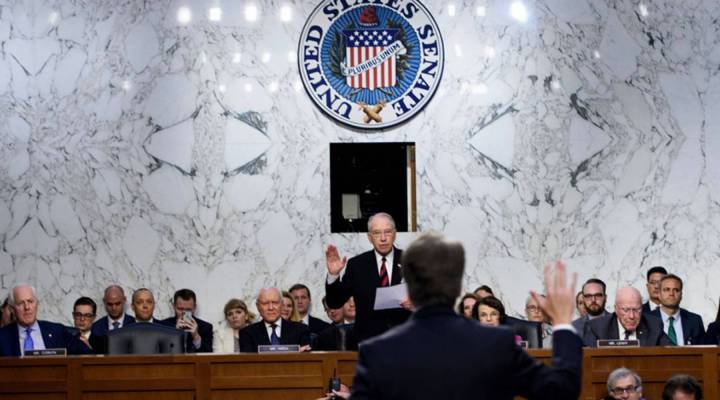 Judge Brett Kavanaugh is sworn in by Chuck Grassley, rear, the chairman of the Senate Judiciary Committee, during his confirmation hearing to be an associate justice on the U.S. Supreme Court on Sept. 4. BRENDAN SMIALOWSKI/AFP/Getty Images

Judge Brett Kavanaugh is sworn in by Chuck Grassley, rear, the chairman of the Senate Judiciary Committee, during his confirmation hearing to be an associate justice on the U.S. Supreme Court on Sept. 4. BRENDAN SMIALOWSKI/AFP/Getty Images

In any workplace, there are many things to consider: Who gets promoted and when? What are the steps to creating a diverse work environment? How should grievances be handled?

Right now, these questions are playing out in Congress as the Senate Judiciary Committee addresses allegations of sexual misconduct against U.S. Supreme Court nominee Brett Kavanaugh.

The influential committee is composed of 10 Democrats, four of whom are women, and 11 Republicans, all of whom are men. This has led to criticism about who sits on the committee, the selection process and the lack of gender diversity. In advance of Kavanaugh’s hearing, the GOP members of the committee have tapped “career prosecutor” Rachel Mitchell to question one of Kavanaugh’s accusers, Christine Blasey Ford.

To understand how the Senate Judiciary Committee operates like a workplace, we spoke with Dr. Jack Pitney, professor of government at Claremont McKenna College, and Jessica Levinson, a professor at Loyola Law School. They discussed the committee’s purpose, the process of gaining a seat, the gender breakdown of congressional committees and what the future could hold in the wake of Brett Kavanaugh’s confirmation process.

The following transcript has been edited for clarity.

What exactly is the Judiciary Committee, and what are its functions?

Jack Pitney: Much of the work in both the House and the Senate takes place in committees. The Senate Judiciary Committee has special duties when it comes to the confirmation of officials to the Justice Department, and in particular the appointment and confirmation of judges. Judgeships go through the Senate Judiciary Committee, which is why it’s so relevant in the case of Kavanaugh.

What exactly are the qualifications to be on the committees, and in particular, the Judiciary Committee?

Pitney: You don’t have to be a lawyer, and neither Chairman Chuck Grassley (D-NY) nor ranking member Dianne Feinstein (D-Calif.) is an attorney. That means a lot of the heavy lifting when it comes to committee hearings in terms of questioning falls on those who have some experience.

That’s why it’s important on the Democratic side to watch Sen. [Kamala] Harris (D-Calif.) and Sen. [Amy] Klobuchar (D-Minn.), who are not only attorneys, but who have direct experience as prosecutors and as prosecutors of offenses involving sexual assault. So they’re going to be people you want to pay close attention to.

On the Republican side of the committee, why are there so few women?

Pitney: Well, in part that’s a function of the makeup of women in the Senate. Most of the women in Senate are Democrats. And that, in turn, is the result of some long-standing voting patterns in the United States.

In the case of the Senate, women have tended to prefer other committee assignments. For example, Joni Ernst (R) of Iowa very much wanted to be on the Armed Services Committee because she had a military background. So I wouldn’t necessarily infer that the Republicans made a conscious decision to exclude women from the committee. It’s the way it worked out. And again, it’s a reflection of the makeup of women in the U.S. Senate — most of whom were Democrats.

With the Kavanaugh confirmation, what exactly does this gender makeup mean for the hearing and the rest of the confirmation process?

Pitney: It creates an appearance problem for the Republicans. In 1991, during the confirmation process for Justice Clarence Thomas, we saw the allegations from Anita Hill of sexual harassment. At the time, there were no women at all on the committee. … There were no African-Americans on the committee. So when they spoke, you had the terrible optics of an all-white, all-male committee asking tough questions of an African-American woman. Clarence Thomas himself was able to create quite a moment by accusing the committee of a “high-tech lynching,” and an all-white committee was in an awkward position trying to counter that charge.

Dynamics are different this time. You don’t have the racial angle, but you do have the gender angle, and that’s why Republicans have asked an outside counsel to handle the questioning. They realize that having a bunch of white males, some of whom are quite elderly, asking the questions would look terrible. Expect the Democrats to be very engaged in the process asking questions directly, and again particularly watch Sen. Harris and Sen. Klobuchar.

What exactly is being done to address this image and this problem of perception?

Pitney: Well again the appointment of the outside counsel is the best the Republicans probably could do in the short run. In the longer run, I would be astonished if when we started the next Congress that there is not a woman or two on the Republican side of the Judiciary Committee. They realize that if something like this comes up again, they’re going to have another perception problem. So I think one of the safest bets in Washington is the Republicans are going to make some adjustments in the makeup on their side in the Judiciary Committee.

How much work is involved when you’re on this committee? What are the reasons a senator would want or not want to be on the committee?

Pitney: Again, it’s not just confirmations, the work of the committee deals with a whole range of issues, including criminal justice and constitutional amendments. So if you have an interest in those issues and an interest in the broader range of topics that the Department of Justice deals with, that would be a committee you want to be on. It involves a lot of work obviously, in this committee as every other committee in Congress.

What role do political contributions play in the committee assignments, and who gets chosen for those?

Pitney: Direct role, not so much in the Senate. The House of Representatives is a different story — the ability of a member to raise money for the party is an important part of decision-making, but not so much in the Senate. In particularly, the Judiciary Committee is not as much of a magnet for campaign contributions as the committees dealing with economic issues. If you want to be on a committee where people are going to throw money at you, be on the Finance Committee.

Did you have any general comments about the Judiciary Committee selection process?

And so when you see the Senate Judiciary Committee having no gender diversity on one side, I think that’s how you get statements, for instance, by Sen. Mitch McConnell saying, “We hired a female assistant.” That wording and that phrasing is really, I think, largely out of touch with how most people speak about other lawyers. And particularly about other female lawyers. And so if you had more women on the Judiciary Committee, then I think that you have at the very least more perspectives, more life experiences, and that can lead to changing the way you deal with something that is so fraught.