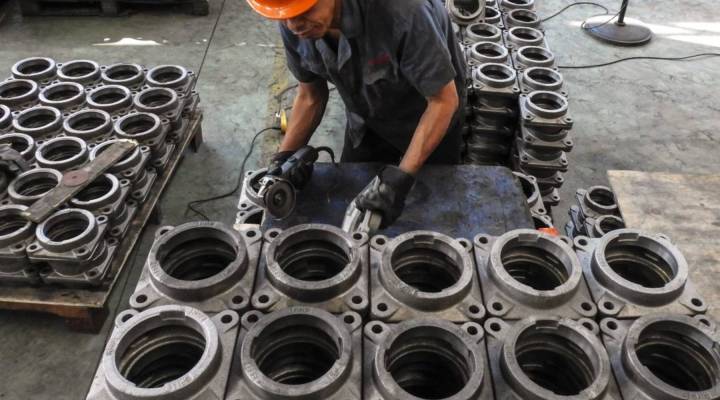 COPY
An employee works on transmission parts at a factory in Lianyungang in China's eastern Jiangsu province on Sept. 14, 2018. The Chinese economy revealed fresh signs of softness on Sept.14 with data showing the pace of investment slowing to record lows while retail spending and industrial production stabilized. STR/AFP/Getty Images

An employee works on transmission parts at a factory in Lianyungang in China's eastern Jiangsu province on Sept. 14, 2018. The Chinese economy revealed fresh signs of softness on Sept.14 with data showing the pace of investment slowing to record lows while retail spending and industrial production stabilized. STR/AFP/Getty Images
Listen Now

When it comes to managing debt, it seems the last financial crisis wasn’t enough of a lesson.

Global debt is on track to hit new highs this year, according to Vitor Gasper, director of fiscal affairs at the International Monetary Fund.

In 2016, global debt hit a record 225 percent of world wealth, according to the IMF’s Global Debt Database, which tracks 190 countries from 1950 to the present day. That figure measures debt taken on by companies, governments, you and me.

“Global debt is very high,” Gasper said. “The headline number is $164 trillion (in 2016). The indication that we have after 2016 is that in nominal dollar terms, that has continued to grow.”

Debt is a double-edged sword. It’s fueling global growth at a time of stagnant wages. But as the 2008 financial crisis illustrated so painfully, when a bubble does eventually burst, the losses ripple far and wide and we just don’t know enough about how all that global debt is linked.

China is a major concern. The Bank of England’s governor, Mark Carney, told the BBC this week that in terms of international financial risk, China is “top of the list.”

“China is a great source of growth for the global economy. It’s an absolute economic miracle — lots of positives,” Carney said. “At the same time, their financial sector has developed very rapidly and it has made many of the same assumptions that were made in the run-up to the last financial crisis.”

“Before the financial crisis, China was able to effectively export its savings to other countries,” Beamish explains. “The result is that global interest rates received a downward pressure … and consumers particularly in the United States were able to borrow beyond what they could sustain.”

Since the 2008 crisis, China’s debt has come home to roost in its mushrooming “shadow banking system,” which operates outside the scrutiny of regular banking. The fear is no one knows how Chinese debt it being invested or managed.

“People get concerned about Chinese debts partly because the shadow banking sector is particularly shadowy,” Beamish said. “The other aspect going forward is the Fed is raising interest rates. And when interest rates are going up,  it’s now China in terms of the major global economies that is exposed.”

In other words, if enough of that Chinese domestic debt has been pumped not into sound investments but into white elephants, then that debt could lead to crisis. And when China sneezes, the world catches a cold.

Beamish says Beijing could limit the damage of any financial crisis internally by using its savings.

“It still has resources internally to be able to clean up debt even if debt is 20 percent of GDP,” Beamish said. “That’s one thing that’s very different about China, compared to Argentina or Turkey.”

But for the rest of the world, a Chinese crisis could be much more damaging.

“The major economies that would be affected would be on the commodities side, the capital goods exporters, all of those that have been dependent on China’s rapid growth,” Beamish said. “Like Australia, even Germany which is very dependent on exports to China. Potentially, Japanese financial institutions might have an exposure to financial distress in China.”

The IMF’s Gasper said China is making progress in trying to wean its economy off credit and that most advanced economies are also beginning to pay down their debt. The question is whether they’re doing it fast enough.

While he says it’s difficult to define a “dangerous” level of debt, the IMF’s advice is to pay it down while things are good.

“It is in periods of growth that it is important to build a buffer,” Gasper said. “Research does show countries that do have these buffers do better.”

Whether you’re a person, a company or a country, we’re more dependent than ever on debt-fueled growth. The trick is to find a balance between growth and crisis.