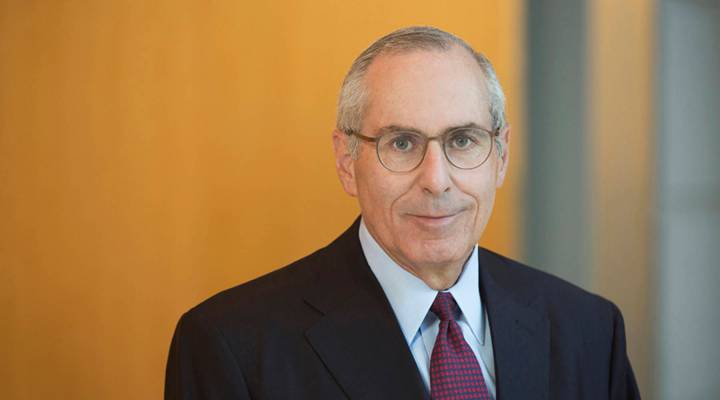 Ten years ago Thursday, as the U.S. housing market threatened to crumble, the U.S. government seized control of the mortgage giants Fannie Mae and Freddie Mac. At the time, the two government-sponsored enterprises, or GSEs, owned or guaranteed nearly half of single-family mortgages in this country. As defaults on those mortgages piled up, the companies were losing money fast and investors worried Fannie and Freddie didn’t have enough capital to remain solvent. The bailout authorized the U.S. Treasury to buy up to $100 billion in Fannie and Freddie stock, and the companies were placed under control of their regulator, the Federal Housing Finance Agency. A decade later, the two companies remain in conservatorship.

This week Freddie Mac announced its CEO, Donald Layton, will step down next year. Marketplace senior correspondent Amy Scott spoke recently with Layton, who took the helm in 2012, about how the company has evolved.

Amy Scott: You had a long career in the private sector, at JPMorgan Chase then at E-Trade. What made you want to take this job at Freddie Mac?

Donald Layton: I was already retired when I was approached for running Freddie Mac while it was under government control and conservatorship. It kind of triggered a long dormant desire I had even from college days to kind of do public service after I finished my business career. And the nature of this job has one foot in the world of running a company and one foot in the world of government service and policy, so it hit the spot for me.

Scott: It’s interesting you say government or public service because in some ways it is a government job. What does it mean to be under conservatorship? Your shares are publicly traded but you’re backed by the government. What does that mean in practice?

Layton: In practice it means it’s sort of a hybrid. You run as a company as if you are owned by your shareholders, in a lot of ways, with publicly reported financial statements and following SEC guidelines. But in reality your fiduciary duty is to the government. The government can give us orders, as much or as little as they wish. The legislation puts them in charge while we’re in conservatorship. It’s sort of an odd hybrid that has become very common for the GSEs for the 10 years now.

Scott: So take me back to Sept. 6, 2008 when the Treasury Department stepped in to bail out Fannie and Freddie. What do you remember about that time and about hearing that news?

Layton: Well you have to remember that time was an era of great tension and uncertainty in the financial markets with all sorts of stresses, companies having gotten in trouble, financial companies. In fact I joined E-Trade as part of a recapitalization rescue, since they were probably the first well-known company to be hurt by the financial crisis. That September was the September of the GSEs being put in conservatorship. That September was when Lehman Brothers failed. That September is when AIG was rescued. It was an era where everyone was concerned about global collapse of the financial system. In that sense the GSEs being taken over was just one of several major events going on daily.

Scott: And you were of course engaged with a different part of the financial markets at that time. Do you remember thinking a government takeover of these, what had been sort of quasi-governmental organizations, was a big deal?

Layton: The answer is I remember it but quite honestly E-Trade was under tremendous stress itself so I was focused on that. The GSEs again were just part of the stresses and the government takeover almost took them off the table for future stress. So, it was sort of a little bit one and done, where the other concerns, again Lehman Brothers, AIG and such, were messier situations if you will.

Scott: Right. And those were still to come of course. So, ten years later the housing market is booming, the economy is booming. Why are Fannie and Freddie still under a conservatorship?

Layton:That’s a two-step answer to that question. The first step is why not just have them go back to the way they were? Let them raise capital so that they can be fiscally solid companies and let them go. And the answer to that is that there was bipartisan consensus in government, generally held notion, that the system had some very strong defects and they can’t go back because of those defects. They must be fixed first. The most common defect, not intended, but it ended up being large, was for example the unlimited ability they had to use government subsidized funding to generate these giant investment portfolios that produced most of the profits. That was not considered something that should happen, that was not a good thing. So everyone agrees you have to change the system. But there’s major political disagreement on what the change should be. On the more progressive side, it’s preserve affordable housing goals and have the GSEs be a strong role in the mortgage markets which we have traditionally had. On the conservative side, it’s shrink them, they should have less role, the market should be more private. And that debate continues with no resolution in sight yet.

Scott: Do you still need, in your opinion, the backing of the U.S. taxpayer?

Layton: Yes. The reality is that Freddie Mac is one of more than a dozen companies and agencies the federal government has set up over the decades to support housing, and the business model of all of them requires federal backing to our liabilities. Before conservatorship that backing was known as the implied guarantee. If you went to S&P or Moody’s and read their analysis they would say very clearly, “we award them a triple A because of the implied federal guarantee.” Since conservatorship there is a written contract supporting us. It’s not a full guarantee but close enough that the markets treat us not quite as if we are the U.S. Treasury but pretty close, in terms of credit quality. So yes the whole business model does require federal backing in some form.

Scott: And yet you have more than paid back the taxpayers since the bailout and you’ve undertaken a program to shift a lot more of the risk to private investors. Talk about that effort.

Layton: The Achilles heel of the GSE system and these other agencies is that we end up being monolines, meaning one line of business, which of course is mortgages, and we held the credit risk, in extremely large size. We have roughly two trillion dollars of mortgages. The credit risk on that is obviously undiversified in reality versus other asset classes. And so when the mortgage asset class gets in trouble the companies basically collapse and that’s what led to conservatorship. One way out of that conundrum, to be a monoline with a statutory requirement to support the mortgage markets, is instead of sitting on the credit risk, to sell it off to the private capital markets, institutional investors. That was a gleam in the eye of people for many years. Freddie Mac, between my background and some people working on it there and some support from the government, was able to take this general notion and turn it into actual transactions in large size that take increasing amounts of our credit risk and indeed sell it off to investors so they’re on the hook. We pay them for it, it costs money. We’ve been able to figure out how to do it pretty efficiently so it doesn’t cost too much. And as our portfolio turns over, a greater and greater share of our credit risk is going to private investors. That means the taxpayer is less on the hook behind us and that is one of the major public policy objectives we have.

Scott: We talked about how the housing market has been thriving, but homeownership is still out of reach for many Americans. With prices continuing to rise and banks more restrictive in lending, which arguably they should be, but some people argue it’s gone too far the other direction. Are you doing enough to help low and middle-income people become homeowners?

Layton: That’s a very good question. Obviously as a public policy organization, which is what we were, we have a needle to thread. On one hand we want to make credit as available as possible to the American homebuying public, call it the broad middle class and working class. That’s what we’re there for. At the same time we are in a commercial format of a company that is supposed to be prudent, safe and sound in our credit policies, and make quality loans. It does no one any good to make mortgages that people can’t pay back. That was the lesson learned in the financial crisis. So we try as hard as we can to figure out creative ways to make reasonable quality credit decisions while being safe and sound. So we have we think, done a pretty good job, but we’re just one of the many factors that leads to homeownership being lower than it has historically been in recent decades. So we can only do so much. We do what we can. We generally have gotten pretty good plaudits from the various policy organizations of being pretty, doing pretty good job of meeting the two masters: access to credit but safe and sound lending.

Scott: Can I ask you, do you think the system is sound now? I mean could we see a housing bubble pop like we did 10 years ago?

Layton: Well the system is in much better shape than it was before. All financial institutions have much stronger backing behind them, much higher capital ratios. The CFPB’s [Consumer Financial Protection Bureau] concept of QM, qualified mortgages, means people are not particularly doing teaser rates or all those kind of things that didn’t go so well, that had large losses and somewhat abusive before the financial crisis. So the core, the vast majority of the mortgage system is very safe and sound these days. But there are always fringes, people can do things on the sides. There is some of that growing but it’s very small at this time and I wouldn’t say it’s anywhere even on the same planet as what was going on before the financial crisis. It’s always to be watched and people are always sensitive about it but it’s really quite small this time.

This interview is part of Divided Decade, a yearlong series examining how the financial crisis changed America.