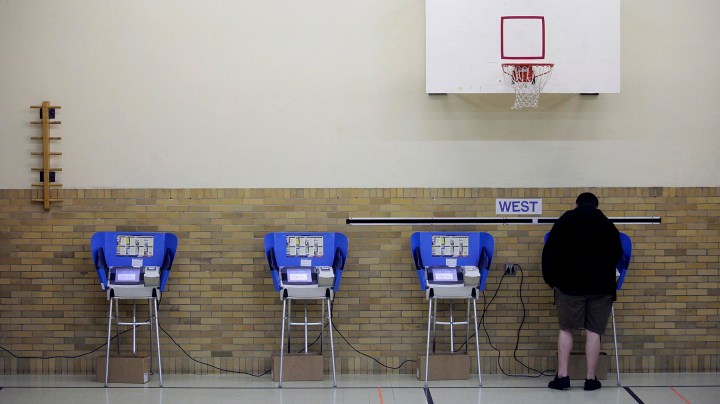 The classic IT advice is to back up anything that’s valuable, just in case. With computerized voting, the preferred backup is good old-fashioned paper records. And yet, 14 states have systems that either lack paper backups completely or are only partially backed up by paper. So if something goes wrong with the state’s voting system on election day, like hacking or some malfunction, that means there won’t be a foolproof way to make sure votes aren’t lost. J. Alex Halderman, an election security expert at the University of Michigan, says after Russian interference in the 2016 presidential election, states have made some progress toward protecting their voting data and machines. He spoke with host Tracey Samuelson. The following is an edited transcript of their conversation.

J. Alex Halderman: The voting process as a whole does remain vulnerable. About 40 states continue to use computer voting machines that are at least 10 years old, and often these machines aren’t even receiving software updates or security patches, just leaving them wide open to hacking.

Tracey Samuelson: OK, but Congress has been mulling some legislation to try and tackle some of these issues. Tell me about the Secure Elections Act. What would it do?

Halderman: So the Secure Elections Act tries to set basically a floor of security standards and practices that states could meet or exceed. The most important of these are making sure that every vote is recorded on a piece of paper which can’t be changed in a cyber attack. And then making sure that election officials go back and spot check those paper records and make sure the election night results are correct.

Samuelson: And is it enough?

Halderman: Well, it could be enough. Unfortunately, the legislation seems to be watered down more and more with each iteration through Congress. And just today in the Rules Committee they are marking it up and hopefully the language will become strong enough that it can still be effective. But if Congress doesn’t act soon, I fear that elections this year and in 2020 are going to be at significant risk.

Samuelson: Yeah, we’re about two and a half months away from the midterms. So is there still enough time now to make changes that will impact those elections?

Halderman: Well, it’s going to be hard to change much before November. But officials are being more vigilant about security, about inspecting for attack attempts. We can’t make all the changes we need to in time for this year, but it is a start. And with the extra time between now and 2020 there is a significant opportunity for state governments to replace some of that aging and crumbling equipment. I just hope they get started soon because it’s going to feel like it’s right around the corner after the November election.